Feeling Naseous, and Unsteady on Your Feet? Why Not Get Drunk? 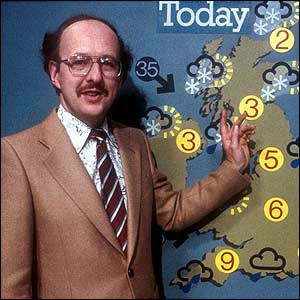 This is a picture of Michael Fish. It is Michael's birthday today.
He is 66.

He is trying to look happy because it is his birthday, but his brave smile cannot mask the embarrassment that he still feels over his failure to predict the storm of 1987. Michael has been known to say 'If I had a penny for every time someone mentioned that forecast, I would be a millionaire.' Poor Michael.

We thought of him when we read a letter from the Balfour collection dated 1784, sent to Mrs Maria Manson from her son. He had been travelling from Halifax by boat and experienced 'contrary winds'. These winds trapped them in Ireland for 6 WEEKS.

Eventually, young Manson caught a boat to Bristol, a journey which should have taken 36 hours. They were at sea for 10 DAYS.
But that is not all: " to add to the dreadfullness of our situation, our anchor slipped from the bows and brot (sic) a hole in the ship's bottom which kept all hands constantly pumping and bailing."

He then goes on to complain that there was no booze on board. Who could hold down a drink at a time like that??!!

All were awakened the next night with a bloodcurdling cry of "all hands on deck! Land under Bow" and everyone on board attempted to right the sails and various other...em... bits... so that the boat could get to shore.

To cap it all off, everyone's luggage was still stranded in Ireland and would take at least three days to catch up.