Here are a few items from the second instalment of our Orkney At War exhibition. These items are taken from records during the second three months of the war.
Although the first item from James Marwick's Diary is from October, it shows that security is increasing rapidly. The Orcadian publishes its first letters home from soldiers and we hear about the value of men with false teeth.


D1/1118 – Diary of experiences and daily incidents during the Great War
Written by James Marwick, Lieut/Capt Orkney Royal Garrison Artillery (T)
The Orkney Royal Garrison Artillery, (T) was a Special Service Section which voluntarily agreed for special duty on certain stations. These men received a small retaining fee.
1914 Oct 13th (Thursday) Fair. /Rose 7am and had breakfast. … Reached Stromness at 11am and I marched those for Hoy B’try to Drill Hall. They were mostly from Birsay. Broke off until 2pm. The Drill Hall was used as quarters for the men and the Temperance Hall also. Those belonging to the town were quartered at home. I lived at home as did the other officers for there was no accommodation elsewhere. The huts were being put up. / Were working at outer B’try near old Jumping over dyke. There were 2/ 12pds mounted. Searchlights being erected further west. The Battery had been hastily put up by Marines most of whose work had to be pulled down….As we were making for Stromness in the drifter we had to go to H.M.S. Hannibal lying off the East Lighthouse. … No vessel allowed now to Stromness harbour without permission or written authority.


From the Orkney Herald 4 November 1914
THE ALIENS’ ACT
REMOVAL OF ALIENS FROM ORKNEY AND SHETLAND
The London Gazette last Tuesday contained a notification by the Home Secretary widely extending the list of prohibited areas under the Aliens Restriction Order.  The following whole counties are now prohibited areas:- Monmouthshire, Norfolk, Suffolk, Sussex, Glamorganshire, Argyllshire, Buteshire, Caithness, Fifeshire, Haddington, Kincardineshire, Kinross, Linlithgow, Nairnshire, Orkney, Ross and Cromarty, Sutherlandshire, Zetland, Cork, Dublin, Kerry, and the Isle of Wight.  In addition the prohibited areas in essex, Kent, Lincolnshire, Northumberland, Aberdeenshire, Argyllshire, and Inverness-shire are extended, and the areas of Banffshire and Berwickshire are prohibited.  [Under the operation of the Order a number of aliens of various nationalities residing in Orkney and Shetland were last week removed to places outside the prohibited areas].
_____

A SOLDIER’S LETTER
Rev. Alexander Goodfellow has received a letter from his nephew, Pte. Arnot Goodfellow, who belongs to the Black Watch.  It was written on the 19th October, bearing the postmark of Poperinghe, which is an old commercial town of Belgium, in the province of West Flanders, 4 miles from the French frontier and 8 miles west of Ypres by rail…The letter had been censored in London but nothing had been removed…Arnot writes “I have just received your parcel which came all right though it had got a lot of knocking about.  I am pleased you sent a pair of cuffs as they will be very handy, also the belt.  I was waiting patiently for some writing-paper, and I have got a good supply now – off course I give some to my chums when they want to write.  I enjoyed the remainder of the parcel.  The pencils also will come in handy…
We are beginning to wonder when the end is going to come.  It cannot come soon enough, and I hope it will not be long.  My chum Bannerman from Arbroath was killed on the 14th September, our last big battle.  We lay in the trenches for a month after the fight facing the Germans who were continually attacking parts of the line.  On several occasions when outside the firing line I heard them speaking and, by going out a certain distance, we could see them, whilst we were continually being annoyed by snipers.  The German infantry don’t seem to be up to much but they have got splendid artillery.  During the time we lay in the trenches they accounted for about 100 of our chaps, I believe, all with their artillery, except one or two who were sniped.  On the 14th September the Black Watch lost 461 – that includes killed, wounded and missing – which was the greatest number the regiment has ever lost in one day. 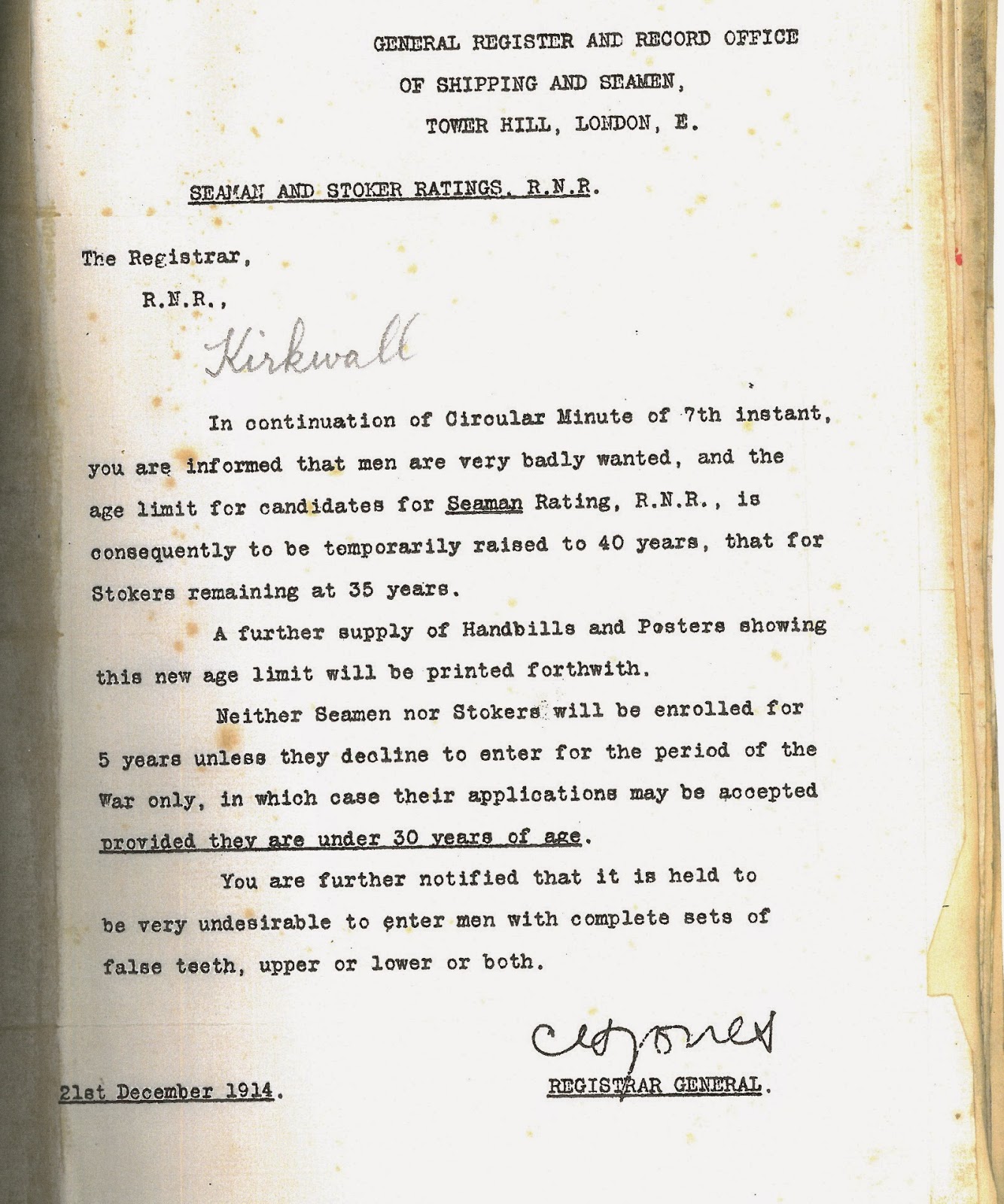 From the Orkney Customs and Excise Collection which includes a correspondence and memorandum book for the Royal Naval Reserve, a letter explains that the age limit of seamen is to be increased and not to employ men with false teeth.


I stopped writing my diary for a month for there was nothing unusual to put down. We altered the watches putting in a dog watch 8-11, 11-2pm making the watches a good deal easier until Monday Dec 6th, when the inner group also were manned and all detachments reduced to 4 men. Capt. Of H.M.S. Hannibal visited Battery on Sat Dec 5th. Huts were entered on Sunday 13th. They were not quite finished but an effort was made to get the men there so that all could be together. / Father sprained his ankle badly on Thursday 26th Nov. He was just walking outside coming up from the pier when he stumbled in the darkness and fell with his foot under him. He had to rest and has been in his bed up to now, 14/12/14.


Weather very rough and unsettled. Gales of wind and heavy sleety showers. Two Trawlers went ashore in Harbour one day but got off. Lifeboat called out three times to vessels, fortunately no lives lost.


Strict watch kept for submarines. Topday (Monday 14/12/14) I am on watch 2pm – 8pm. There is no accommodation for all the officers in the huts so I stay at home and am not sorry. I do a little work and keep the business together a little. Capt. D B. Peace was here for some time but was ordered to headquarters. 2nd /Lt Baldwin was sent here, so we have five officers. On 12/12/14 there was a concert for naval & men in Town Hall and it was well attended. Tea was supplied. A club has been formed and is carried on by the ladies of the town in Town Hall for men off the trawlers and warships.


Frosty and clear and fine. I brought in Christmas Day in the shelter by the outer Battery. We shook hands all round and exchanged usual compliments as soon as midnight came and went. / Coming home from Battery I came down the New Road in South End and it was just like glass from top to bottom. Sitting on my “hookers” I slid half way down when off came my mitten. I was nearly at the street before I could stop. Then slowly crawling on all fours back to get my mitten I slipped on my side and rolled right across the road so slippery and it is a mercy no one saw me else I would have been put down as drunk. / Watch 2pm – 8pm.

Christmas Day was different for Margaret Tait in Kirkwall. In Dec 1914, she would be about 55 years old:
D1/525 Diary of Margaret Tait
25th Christmas Day
I rose, dressed & went to the window to have a look out on Broad Street. It seemed strange to see the shop windows without the barricades & stranger still to think there would be no Ba's played today. The war has changed everything. It is the first time in the memory of the oldest inhabitant that no Ba' has been played & it is a great miss.
James Marwick describes an incident in Stromness on Hogmanay:

Thursday, Dec 31st
Moderate / Watch 6am – 10am / Had very nasty bilious attack with headache. Was in bed all afternoon. / There was a shooting accident on the street in the evening. A boy off one of the water carrying steamers fired a revolver or pistol on the street. The bullet entered Hilda Harvey’s foot and made a very nasty wound but it did not lodge in her, for a mercy. The police took the boy to the lock-up. The incident created quite a stir in the town.
Margaret witnesses wartime events in Kirkwall:
Jan 2)
A Norwegian Steamer blown up by a mine in the North Sea. Part of crew picked up by trawler & brought to K'wll. The remainder drowned. Also shipload of Iceland ponies brought to K'wll as possible contraband of war.


And James Marwick gets a transfer...Thursday Jan 7th


Fine. /Watch 2am - 6am. Off at 10am. Was in town all day. Brought out some more things at night. When I came to Battery at 6pm with a parcel I found orders had been received for me to proceed to Hoxa Battery on Saturday 9th . I was rather taken by surprise but no use saying a word. Watch 6pm-10pm. Slept in huts.
By the end of January 1915 there were problems with the water supply in Stromness: 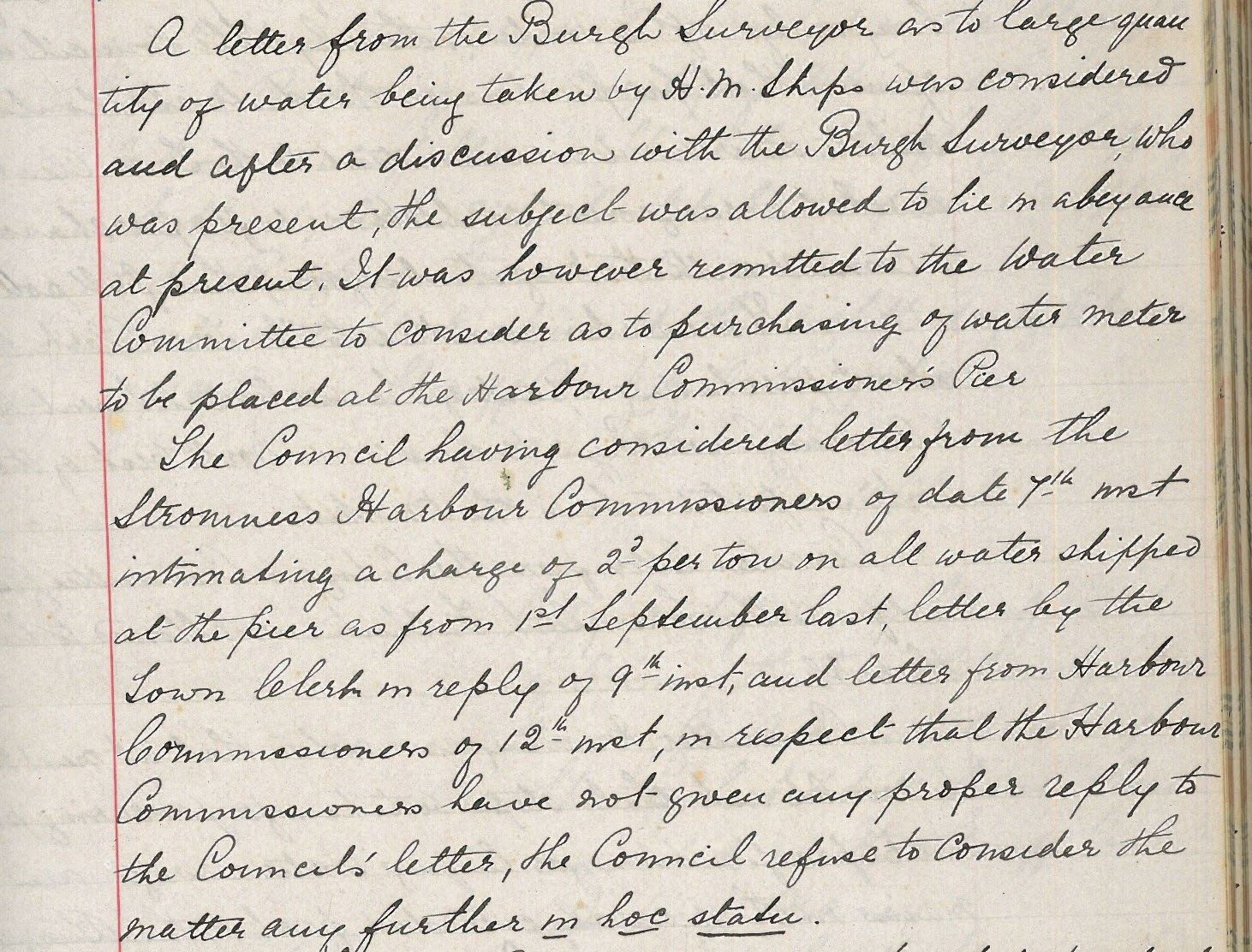 "A letter from the Burgh Surveyor as to large quantity of water being taken by H. M. Ships was considered and after a discussion with the Burgh Surveyor who was present, the subject was allowed to lie in abeyance at present. It was however remitted to the Water Committee to consider as to purchasing of water meter to be placed at the Harbour Commissioners Pier.

Click on the label "Orkney at War" below to see more blog posts on this subject.

Email ThisBlogThis!Share to TwitterShare to FacebookShare to Pinterest
Labels: bemusement, ridiculous, The Orcadian 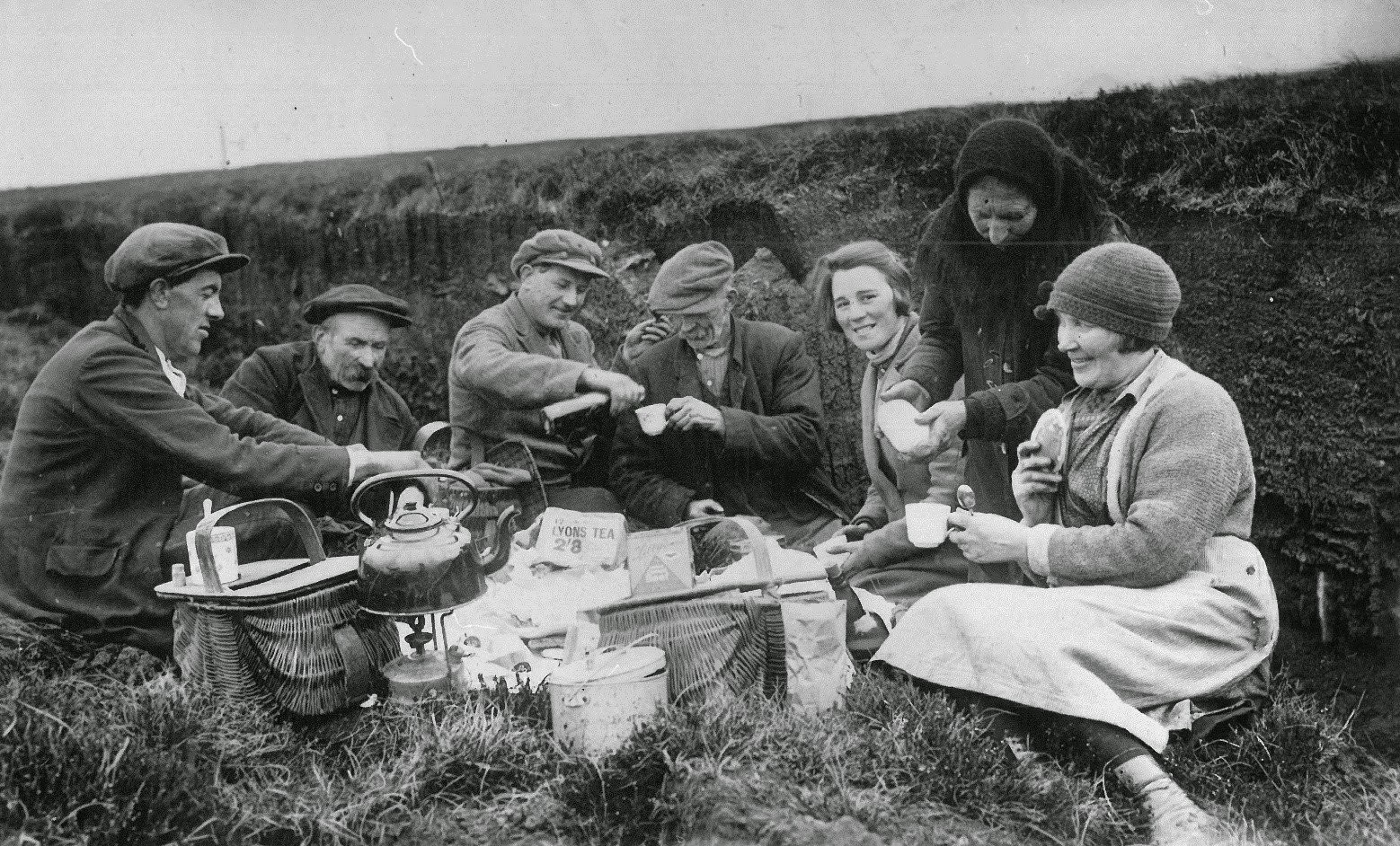 We have several folders worth of picnic photos in the photographic archive. Orcadians obviously loved a good picnic and the images range from small get togethers to vast, highly attended occasions.

Some of our photographs show very dressed up people, some show picnickers having a break in scruffy work clothes. Some show lunchers munching on a banana and boiled egg, others have tables full of plated sandwiches and cakes.

The one thing that is always done properly is tea. Even if the picnic is a casual affair with a few sandwiches out of a basket, eaten off a be-napkinned lap, there are always proper cups, and quite often an actual kettle. Above shows a typical example.

We enjoy tea at the Orkney Archives (perhaps we have mentioned?), so imagine our delight when we found these pictures of a picnic where, not only were several kettles in attendance, but an actual STOVE with a CHIMNEY. 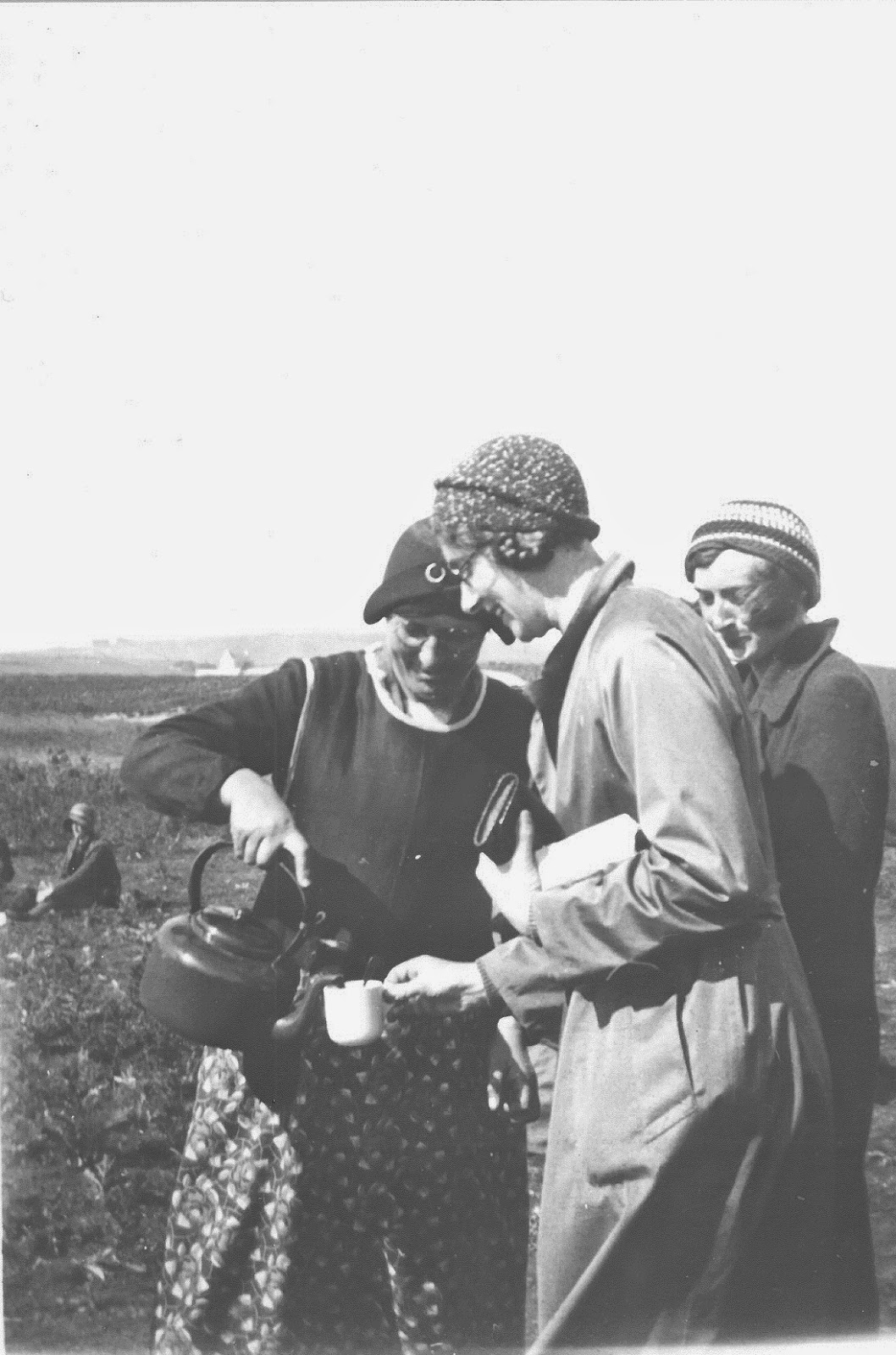 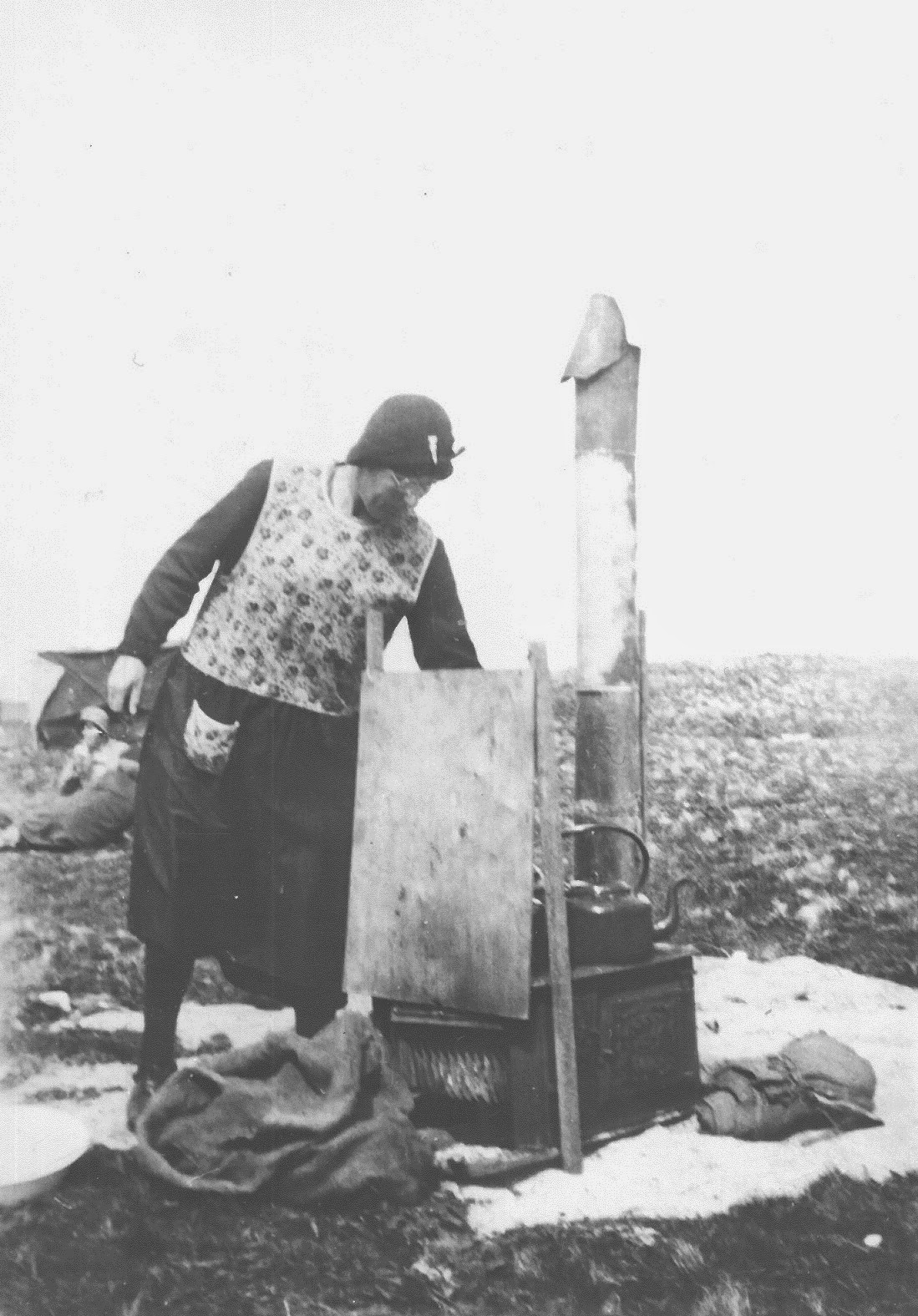 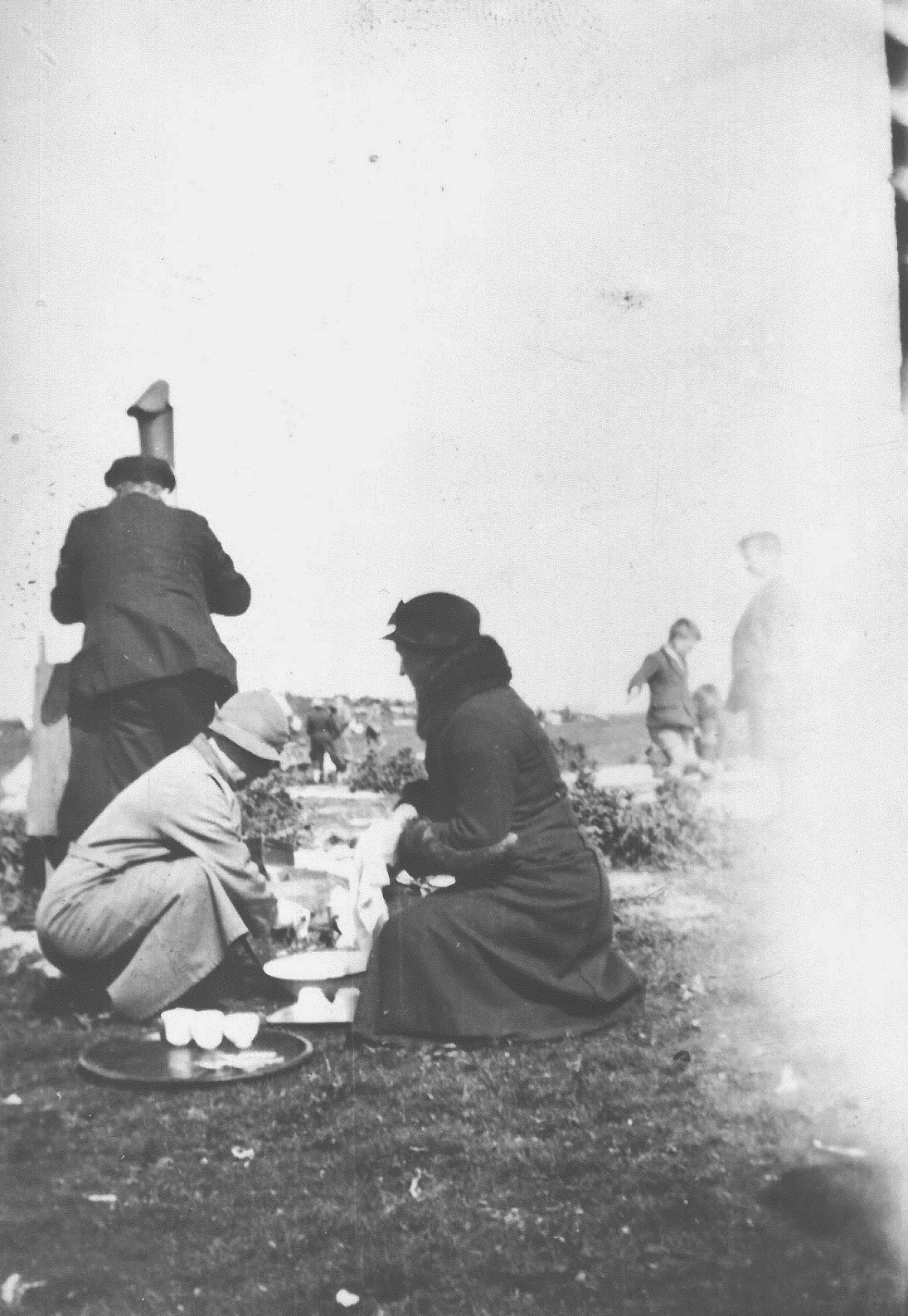 All of these photos were taken from the miscellaneous file so we do not know where they took place or who attended.