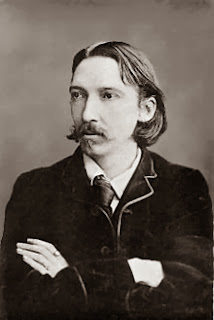 Today is the 163rd anniversary of Robert Louis Stevenson, author of Treasure Island, Kidnapped, Dr Jekyll and Mr Hyde, A Child's Garden or Verse and, our favourite short story title ever; Thrawn Janet.

RLS is mainly associated with his childhood home, Edinburgh, but he did visit Orkney and Shetland as a nineteen year old with his father, Thomas Stevenson, a lighthouse engineer. Thomas' father, Robert, and his brothers, Alan and David, all built lighthouses and this was supposed to be his son's career until Robert Louis announced that he was going to be a writer.


RLS wrote letters to his mother during the 1869 inspection trips of the family's lights. He was not too taken with Stromness declaring it to be 'a cluster of gray houses in the upper end of a bight - not very inviting.' (bight, or bicht, is a loop)

He was more taken with Kirkwall, however, describing his first view as 'striking'and describing the 'glory' of the cathedral in some detail. 'I know nothing so suggestive of legend, so full of superstition, so stimulating to a wierd imagination, as the nooks and corners and by-ways of such a church as St Magnus, in Kirkwall.
﻿﻿﻿﻿﻿﻿
﻿﻿﻿﻿﻿﻿


Another writer who kept a journal during a Stevenson lighthouse inspection was Sir Walter Scott whose visit to Orkney and Shetland inspired his novel The Pirate.

For more on the 'Lighhouse Stevensons' read Bella Bathhurst's book of the same name.

And for more on RLS himself see here.