Here are a few items from the third instalment of our Orkney At War exhibition. These items are taken from records during February, March and April 1915. We continue with the diaries of James Marwick and Margaret Tait, see an extract of a letter about blockships, letters and postcards home from the front, an appreciation of Orkney knitters and more.

3 February 1915, The Orkney Herald,
LETTERS TO THE EDITOR:  Kirkwall Canadians For The War
Sir,  - As I have noticed in your paper that you wish the names of Orcadians enlisting for the front, I herewith enclose a paragraph taken from last week’s Winnipeg Tribune :- “Highlanders Picking Best – Approximately 100 recruits for active service have been secured by the 79th Cameron Highlanders since it was announced that regiment would go to the front as a unit.  There are still vacancies for a few more men, but medical examination is most strict and only the pick of the applicants is being taken.  They will be known as the 43rd battalion.” Up to the present time there are seven Kirkwall lads with this battalion.  They are now hard at work getting into shape, and expect to move into the new armouries here (which will accommodate 2000 men) by the end of this month.  As the battalion is going as a unit it may be away from here before the 3rd contingent from Canada.  Although there are a number of Orkney lads in other battalions in the city I am unable to give you their correct regiments, but the seven above mentioned are as follows:- William Mowat, Alex. Smith, J.T. Finlay, Archie Scott, Donald Morgan, David Ritch and John M. Work. – Yours &c., Z.  Winnipeg.

6th February 1915, The Orcadian, A Local Man On HMS Lion
Able-seaman Jack Crisp (whose wife resides in Wellington Street, Kirkwall), has been home on a short furlough. Crisp was in the famous North Sea battle, and gives an interesting description of his experience. 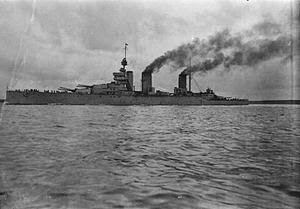 
Thursday 18th Feb. [D1/1118  Diary by by James Marwick, Lieut/Capt O.R.G.A (T)]
Fine all day - officer of the day - Admiral Sir S C Colville who is in full charge of Scapa defences was here about 1 o'clock. Capt. Van. was on board "Royal Arthur" at the time. - Had my clothes from home - a letter from M. and large bundle of papers from Ellison. - Telephone message that 5 (five) German Submarines seen off Hoy 65 miles. - One was reported off Switha island this morning. This is the day that the German blockade by Submarines begins. They probably will sink some merchant ships. Some of our men go on leave tomorrow and we are all going to get it.

27th Feb - In a Letter to the Admiralty from CSd/S C Colville
"I have been considering the question of attempting to permanently block Kirk Sound; if successful this would be a very great additional protection to the Fleet anchorage, and I consider it well worth trying although the very strong  tides in that channel may cause difficulties. Therefore on the Arrival of the “Minieh”, I intend sinking her to the southwards of steamship “Thames” in Kirk Sound (i.e. between the “Thames” and the North Corner of Lamb Holm).If the “Minieh” will stand in this position I then propose to sink another ship between the “Thames” and the “Numidian” the northernmost of the two sunken ships in Kirk Sound."


10th [March] : [D1/525 Extract from the Diary of Margaret Tait] Saw a real Indian on the street today, dark swarthy skin & scarf swathed over his head & hanging down over his shoulder. The wind had got in his thin blue trousers making them look like balloons. There were 13 German prisoners to be landed at Kwll pier today. Down to the mount this evening. The pier lights were shining over the water & Bay was full of ships lighted up making it look like a fairy land. It was one of the most lovely sights I ever saw.


13th March 1915, The Orcadian, Kirkwall War Needlework And Knitting Association
The association despatched comforts last week to various societies:- to Navy League (Scottish Branch)- 5 mufflers, 3 helmets, 1 pair mitts, 2 pairs steering gloves, 5 pairs sea stockings: to British Red Cross:- 12 grey flannel shirts, 12 pairs flannel pants, 12 grey flannel vests, 3 flannel belts, 4 woollen scarves: to Lord Provost Edinburgh’s Fund for Comforts for men on active service:- 16 belts, 2 boxes of chocolates and 4 helmets.
A letter of acknowledgement has been received as follows from the Navy League:
Dear Madam, - I have to acknowledge the very kind contribution which you have sent on behalf of the Kirkwall War Needlework and Knitting Association. The parcel arrived safely and the articles you sent are very welcome, and can be sent at once where they are required. In response to your kind enquiry I have to say that our information at the present indicates that the sea stockings are the articles most in demand, while shirts, cardigans, and socks area also always welcome. If your association see fit to send us further contributions we shall be very grateful, and shall see that they are allocated where they are most required- Yours faithfully, etc 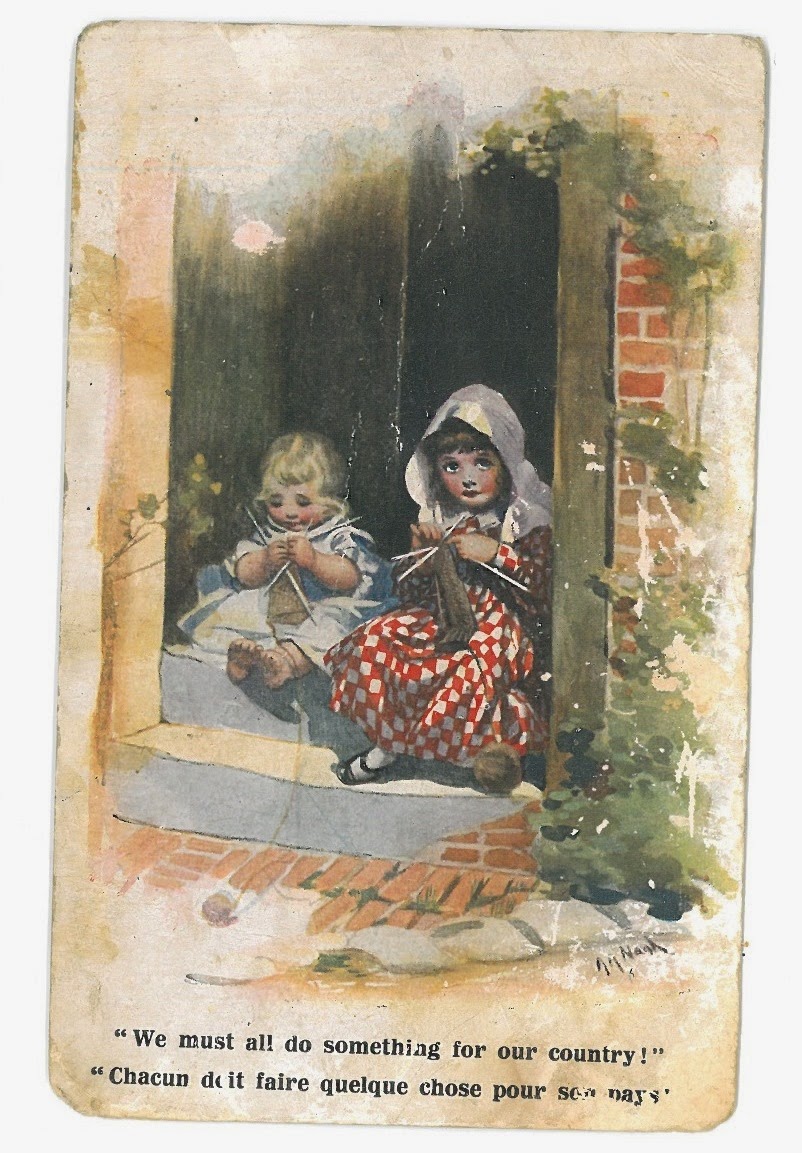 Talking of knitting here is a postcard sent back from France to Daisy Budge in Westray. D1/1183


Monday, 15-3-15 [D1/1118  Diary by by James Marwick, Lieut/Capt O.R.G.A (T)]
Very nasty day - wet and showery - watches 1a.m. - 8a.m. and 6p.m. - 1a.m. / Got word today about the sinking of German Cruiser "Dresden" off Juan Fernandez by our cruisers. She was supposed to be in territorial waters. We were all glad when word came through. I was on watch. The Captain and others celebrated it in style.
Sunday, 21-3-15 [D1/1118  Diary by by James Marwick, Lieut/Capt O.R.G.A (T)]
Fair - Watches as usual - Colonel Harris had lunch with us. He was pleased with practice of last week. There are to be some new arrangements of watches and general camp routine - watches 4 hour shifts for men but we will retain our old way in officers - word of the sinking of two British Battleships & 1 French in the Dardanelles. / We get papers off the "Emperieuse" in Longhope. 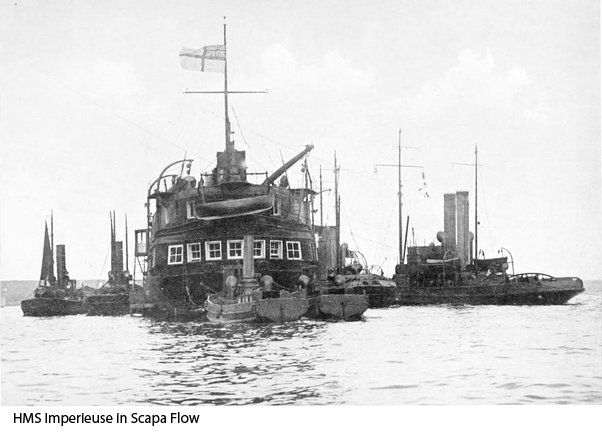 Apr 24th: [D1/525 Extract from the Diary of Margaret Tait]
The weather has been very cold & the winds very searching all this month. There's been snow showers & hail off & on all this time & lots of rain. I've been down to the sea wall almost every evening. How I enjoy the breeze coming in from the sea. The ships in the Bay are as numerous as ever. Some of them are painted on the side showing their nationality. On the side of the one lying in the harbour two white squares were painted, with red crosses on the white. Coming along harbour street you see a large painted gate put up at the head of the pier guarded by a territorial. No-one is allowed down the pier except on business. There is a white motor launch lying in the Bay on board which is a Danish Prince who has been ashore walking through the town. There are also a number of wild beasts on board the yacht.
Willie has been home on his 8 day leave & has gone again. He got rainy weather all the time. The day before yesterday I went up Colwyn way & saw a Dreadnought lying at Scapa. She is the sister ship to the Queen Elizabeth which is fighting in the Dardanelles at present. Some German Zepelins have made a raid on the English coast again not doing much damage. Yesterday was  spring holiday here, but it rained all day & it was dull. The men folk were shifting their flowers out off this garden across the street to their next house. In the evening I went up early & packed a few of my things. We wont be long in this house now. Saw a Maltese sailor named Silvo Merno at P & L's corner. He looked a comic. On the 18th I posted a letter for E Petersen & a newspaper for Dave. There's been lots of German prisoners taken ashore at Kwll lately & sent south. 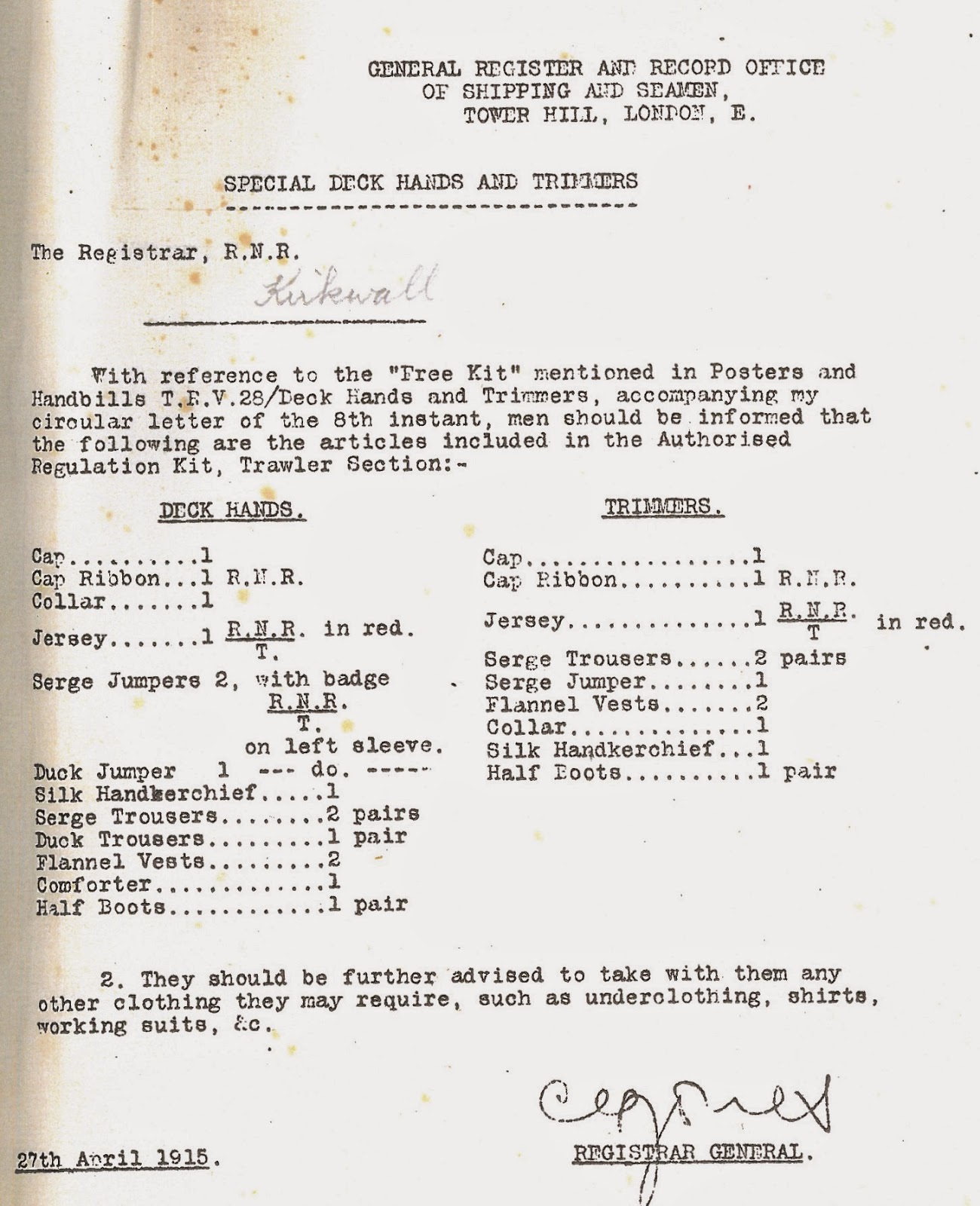 27th April - Lastly from the Royal Naval Reserve Letter/Memorandum book, reference CE55/4/31 we see a list of items in the free kit offered to new recruits.


Our current exhibitions chart Orkney's experience of WW1 at home through the use of official documents, letters home, newspaper articles, diaries and photographs. We have three so far, each covering three months of the war. Click the dates to see a taster of each display so far: Aug - Oct 1914, Nov 1914 - Jan 1915 and Feb - Apr 1915.
Posted by Dusty at 14:47