The 10th instalment of our "Orkney at War" Exhibition is now available to see upstairs on the Orkney Room corridor noticeboard.
The display shows how Orkney and Orcadians were affected by the war in their daily lives, using items from the Archive collections which were created at the time. Items such as newspaper reports, scrapbooks, council minutes, photographs, letters and diaries.


SPHAGNUM MOSS CLEANING IN KIRKWALL
In the paper in January comes a fresh appeal for volunteers to work with Sphagnum Moss and a photograph from April 1917 to show some of the volunteers who came forward.
The fact was recently brought to the notice of the Orkney Moss Committee that the War Office was asking for more moss dressings than the various depots in Aberdeen and elsewhere could supply. It was pointed out that to send away uncleaned moss did not mend matters, and although the Aberdeen branch turns our ninety sackfulls weekly, this does not meet the requirements.
In October, a large amount of moss was gathered by the Girl Guides, Boys Brigade and Boy Scouts; and the ladies of the committee having decided to ask others to give their assistance in cleaning the quantity on hand, they were given the use of the Free Library Hall where there is ample heating and lighting arrangements. Every afternoon one may now find a "hive of busy bees" there; but the hive is not full. The most industrious can make but slow progress at cleaning, as it is essential that the smallest particle of foreign matter is cleaned away from the moss.﻿


There is accommodation for a large number of workers, and we appeal not only to the fair sex, for probably there are men whose days of stir and stress are past who would be glad and willing to lend a hand. It has been arranged, therefore, that any afternoon between the hours of 2 and 3, and on Saturdays from 11am to 6pm, one or two of the principal workers will be found in the hall, who will give instruction in the cleaning of the moss. Little skill, but great pains and patience required. Everyone's help is wanted! Go and do your bit! 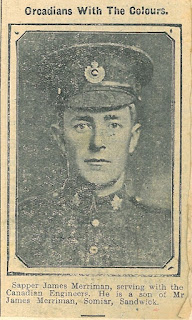 Sapper James Merriman [aged abt 30 yrs old in 1917], serving with the Canadian Engineers. He is a son of Mr James [and Anne] Merriman, Somiar, Sandwick. [Extra information from the 1901 census]

THE HUNT FOR SUGAR
Sugar-hunting is at present one of the worries which harass the good people who are responsible for house-keeping. Many grocers are at present without white sugar, and the best they have to offer is a coarse-looking compound, almost black in colour, which customers are compelled to take in the absence of anything better. Obviously some people are getting more than their fair share of the available supplies, while a proportion is being wasted on expensive confectionary.
The Food Controller has threatened the rationing of sugar, if voluntary abstinence fails to effect a remedy. Experience has shown that more or less maudlin appeals to patriotism are ineffective where food is concerned, and if sugar tickets are to come, the sooner they are instituted the better. Then people will be supplied strictly in accordance with the number in the household.
The Orcadian 6th January 1917 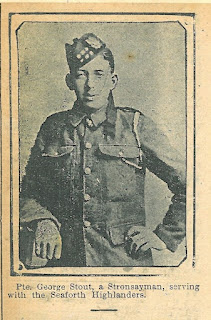 Private George Stout, a Stronsayman, serving with the Seaforth Highlanders. [The 1911 Census says he was the son of fisherman John and Jane L Stout, Station, Stronsay and was aged 13, so would have been about 20 years old in 1917.]
Archive Reference: D1/1127 Dr. Duncan's WW1 Scrapbook


Margaret Tait's Diary 28th Jan 1917 A New Year has come again. I wonder what luck it will bring. The weather for the last fortnight has been very fine, the roads are as dry as summer. Tomorrow Willie leaves home for Inverness. We will miss him in the house. Been out the Craigiefield road for a walk this afternoon with Bunty [the dog] and the bay was full of foreign ships. The sea was flat calm and everything looked very fine. Everything is pitch dark on the street now, at night you just jostle against everyone. The war is still raging as bad as ever and the end seems far off. Busy framing pictures for the fleet in the Flow. It would be proper dull in town now if it were not for the fleet.
Archive Reference: D1/525
Servicemen News:
﻿ 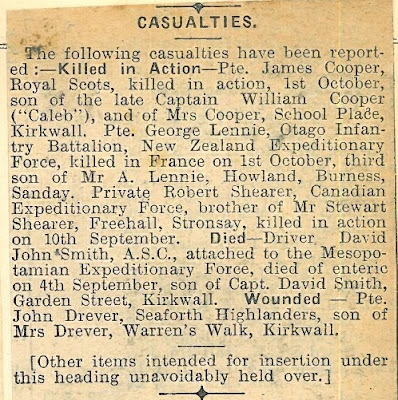 
FIRTH NEWS - COMFORTS FOR THE SOLDIERS AT THE FRONT During the current winter the congregation of the Parish Church has sent to the Lord Provost of Edinburgh 34 pairs of socks and 5 pairs of mittens for the soldiers at the front; and Mrs Yair, as president, has, for the same purpose, sent to London from the Finstown branch of the Y.W.C.A., 18 pairs of socks, 10 helmets, and 7 pairs of mittens.
Orkney Herald 14th February 1917 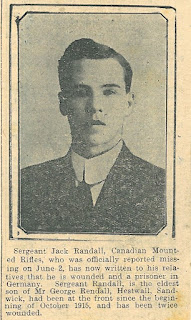 Sergeant Jack Randall, Canadian Mounted Rifles, who was officially reported missing on June 2, has now written to his relatives that he is wounded and a prisoner in Germany. Sergeant Randall is the eldest son of Mr George [and Mary] Rendall, Hestwall, Sandwick, had been at the front since the beginning of October 1915, and has been twice wounded. [The 1911 census says he was born in Evie and was 17 years old, so would have been about 23 years old in 1917. He must have changed his name when he went to Canada].


Letters to the Editor
WOUNDED ORCADIANS IN LONDON HOSPITALS
Sir, - It may be that during the great offensive which is now imminent on the western front, some of our gallant Orkney lads may be wounded and brought to hospitals in London, or in the immediate neighbourhood.
During the time they are in hospital, far from their friends and relatives, they would doubtless appreciate a visit from a friendly Orcadian.
The Committee of the Orkney and Shetland Society of London has decided to arrange for visits being made to Orkney soldiers or sailors who may be in hospital in London. The Committee accordingly will feel obliged if the parents, or other relatives or friends of these lads will communicate to me the number, rank, and name of any such soldier or sailor, together with his regiment in case of the former, and the particular hospital in which he may be under treatment, and the Committee will make arrangements whereby he will be regularly visited while in hospital, and entertained during his period of convalescence.
All communications should be addressed to me - I am, faithfully yours, WILLIAM MAXWELL Hon. secy. Orkney and Shetland Society of London, 44 Calcott Road, Brondesbury, London, N.W.
Orkney Herald 28th March 1917

LOCAL AUTHORITY ASKED TO TAKE CHARGE OF SOLDIERS WITH TB 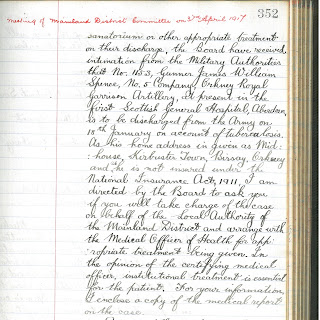 "No. 1153 Gunner James William Spence, No. 5 Company, R.G.A. at present in the first Scottish General Hospital, Aberdeen, is to be discharged from the Army on 18th January on account of Tuberculosis.
As his home address is given as Midhouse, Kirbuster Town, Birsay and as he is not insured under the National Insurance Act, 1911, I am directed by the Board to ask if you will take charge of the case on behalf of the Local Authority of the Mainland District and arrange with the Medical Officer of health for appropriate treatment." [Extract from the minute of the meeting held on the 3rd April 1917]
Archive Ref: CO3/2/2 Mainland District Committee Minute Book 1907-1919

Once again the Orkney Mail Service was in the news:

THE MAIL SERVICE TO ORKNEY
In the House of Commons on Tuesday Mr Cathcart Wason [Orkney's MP] asked the Secretary to the Admiralty if the Admiralty had commandeered the St. Ola, the mail boat between Orkney and the mainland, and if so, he would state if the Admiralty proposed seriously to leave a very important agricultural county destitute of mail service.
Sir Leo Chiozza Money (Shipping Control Department) replied:- "The vessel in question has not been requisitioned. Inquiries have been made respecting her, and we are in communication with the General Post Office on the subject, which is still under consideration."
Orkney Herald 2nd May 1917

The 7th, 8th, 9th, 10th, 11th and 12th instalments are displayed in various locations around the building. The 1st, 2nd, 3rd, 4th, 5th and 6th instalments, including a special feature of the sinking of HMS Hampshire, are available to see in a folder in the Archive Searchroom. Click on "Orkney At War" in the labels to see more blog posts on this subject.
Posted by Dusty at 09:00