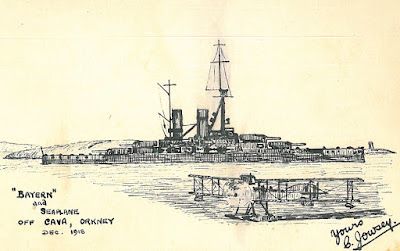 The sketch above was drawn in December 1918 by Lieutenant Jowsey, a colleague of Rev. Dr. T. Crouther Gordon, author of Early Flying In Orkney - Seaplanes in World War 1.


Dr T. Crouther Gordon, who served as a pilot in the Royal Naval Air Service and the Royal Air Force in the First World War from 1917-1919, recalled vividly his experiences as pilot of aeroplanes, seaplanes and flying-boats, hunting the German U-boats that harried Britain's sea-routes. He escorted from the air the surrendered German High Seas Fleet into Scapa Flow in November 1918.


The book is based on Crouther Gordon's diary and pilot log. His entries for December 1918 read:


10th December: In Short 2652 with Flight-Sergeant Ford flew round the German Fleet.


On 15th December half of the personnel were sent on leave on S.S. Vienna.


Time now passed with hockey matches against teams from H.M.S. Revenge and H.M.S. Orion, football between officers and men. After Christmas dinner Major Mills presented me with a special cup as a memento of the occasion.