Merry Yuletide, dear readers. It is time to unveil to you our annual advent treat.


There has been much Chrimbo tomfoolery in the past: Angry, betinselled statues in 2010, Time travelling celebrities in 2013, tormenting poor Killer-singer Seal in 2014, an archive advent calendar in 2016 and we tested you all with ridiculous quizzes last year.


This year, we thought that we would celebrate Christmas of 100 years ago - 1918. The Armistice had been declared and peace on earth was finally a reality. Join us over the next few weeks as we share some archives from that winter.


Our first archive addresses the fact that, although war was officially over, some war time realities still continued. Sugar was still rationed in December 1918 and one still had to produce a card like the one below to procure it: 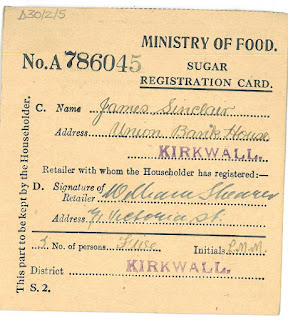 Christmas without loads of sugar? Fear not, the government announced that extra rations were available for the festive season. Phew.