Today we received, as always, the top Fereday Prize projects to catalogue as part of the Archive. The Fereday Prize was devised by headmaster W.P.L. Thomson who was inspired by Dr Ray Fereday, former Principal Teacher of History at Kirkwall Grammar School. Its purpose is to encourage pupils in 2nd year history pupils to go out into their communities and conduct their own research. The prize is organised by the Orkney Heritage Society in collaboration with the teachers of Kirkwall Grammar School and Stromness Academy.

Over the years we have received projects on Harray Stores, Rendall Football Club, Children’s games and pastimes in 20th century Orkney, the Papa Stronsay Monks and the History of Robertson’s Orkney Fudge. Fascinating pieces of Orkney’s history all; nonetheless, they are not the type of subject to be tackled by any serious scholarly tome. This is especially true of the many projects that chart the history of a pupil’s house or are studies of a grandparent or other relative’s life.

Therefore, the Fereday projects form a very important part of the archive and are often brought out for interested visitors to read.

We have not received the top project yet, (Adam Johnston’s study of Lord Kitchener) but we do have the joint winners of second place, Shannon Arcus’s look at the history of the West End Hotel and “Ga’an to school in Birsay, Harray and Sandwick” by Andrea Wishart. Both projects make excellent use of archives, original interviews and photographs and are great sources of information.

I hope you all remembered to wash your faces in May Day dew this morning, as that is a tradition that is known in Orkney and all over Scotl... 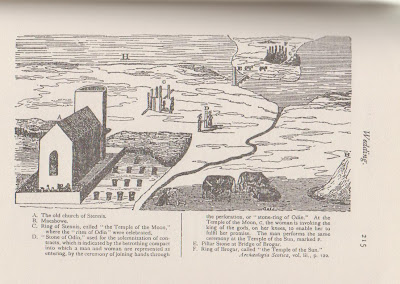