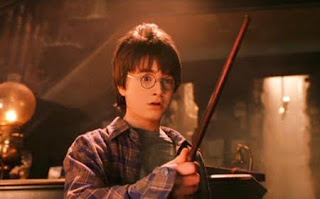 It is J. K. Rowling (author of the Harry Potter books)'s 45th birthday today. We have plenty of witch information/tales in the archive but I could find only one mention of a wizard in the Ernest Walker Marwick collection.

Like nearly all witch stories, the 'evidence' that Tammy Gibson of Deerness in the late 1800s was a wizard is pretty lame. The main charge seems to be that one morning a farmer who was on his way to work saw Tammy "wheeling around in some sort of ritual". He was probably batting away a bee or something.

It was said that Tammy had a book of the black arts and that he had the ability to turn himself into a cat.

Apparently, when Tammy's daughter, Betty, died, the gravedigger re-opened her father's grave so that she could join him. The digger uncovered Tammy's skeleton, started to ponder the old 'cat shape-shifting' tales and then jumped his height when a cat jumped on his back. This, of course, meant that the stories had all been true. Pffffffft.