'Keeping Company and Society With The Devil...' 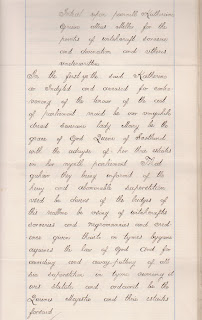 Today in 1692, 5 'witches' were put to death at the famous Salem Witchcraft trials. Orkney had it's fair share of this sort of trial too and you can see a transcription of the trial of Katherine Grieve, dated 1629  above. The original copy is kept in Edinburgh.
These trials were held in front of an assisa, which was a sort of jury and these people would listen to witnesses give evidence against the accused. The 'evidence' was nearly always anecdotal and usually involved someone getting ill after a meeting with the defendant, someone getting better after meeting the defendant, cattle dying after meeting the defendant or crops failing after meeting the defendant.
Sometimes threats were attributed the women which Ernest Walker Marwick, in his work Orkney Witches, thought perhaps meant that some of the accused had been playing up to their reputations a little bit. He gave his 'identikit' of the average witchcraft suspect:
She is a person who is both poor and something of a misfit in the community. Better-off and better favoured women marry happily and have children to take up most of their time and attention. She may have a quick temper, and may have become embittered by her circumstance, so that she is morbidly ready to take offense and ruthless in repaying injury, real or imagined. Her only way of exercising power over her neighbours is to pretend to supernatural knowledge.
This is sad, and it is unbelievable that lonely women, whose only crimes were empty threats and bitter glances were sent to death by a jury of their peers.
Modern readers can see explanations in some of the seemingly strange, unexplainable happenings that were reported during trials:
Barbara Boundie's hearing told of her 24 hour lapse into speechlessness which indicated to her prosecutors that she had "been with the fairie". Her explanation was that she had been travelling four years with an "unhoven (unbaptised) child" and had "fainted", Clearly, she had fallen into exhaustion after four years of the stress of being moved on from place to place with her illegitimate baby.
In 1633 Katherine Grieve and Marion Richart were both asked about the time that a male mutual acquaintance found both women sitting at the table with "the deill (devil) in lykness of a black man". Katherine shouted "tak him, for he will tell upon us" but Marion replied "let him alone, for na body will believe him."
It is now obvious that, if the witness was telling the truth, that the 'deill' was just a man who was not white, perhaps a shipwrecked sailor who was being sheltered by the two women for fear of his persecution.
Marion was executed and Katherine was subjected to 'Non-Capital Punishment' which probably means torture and a stay in 'Marwick's Hole' a dank little cell in St Magnus Cathedral.
There is not a lot of evidence to show the exact nature of the torture that was dished out after sentencing. The only details of torture we really know are those of poor Alison Balfour who was accused of plotting to murder Earl Patrick Stewart. She was kept in a 'cashielawes' for forty eight hours, it is unclear what this contraption is, and her husband was torured in the 'lang irons'. Her children did not escape, with her seven year old daughter put in thumb screws. After days of torture, a confession was finally extracted, only to be fully recalled by Alison at her trial. She claimed complete innocence and said that it was only the unbearable pain which had caused her to confess in the first place.
Orkney Witches by Ernest Walker marwick reference D31/4/4
Folder of witch information reference D31/1/5/15
A Source Book of Scottish Witchcraft compiled by Christina Larner
Transcriptions of Witch trials held in Edinburgh reference SC11/79/1
Posted by Archiver at 16:48