Flybe to the moon... 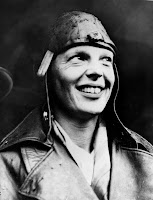 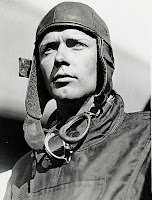 Today is the anniversary of both Charles Lindbergh and Amelia Earharts' solo flights across the atlantic. He was the first man to fly non-stop across the ocean in 1927 and she was the first woman in 1932.
Orkney has quite a fascinating flying history. It was here in 1917 that the landing of a plane on the deck of a moving ship was first achieved.
This may not sound that important until you think about how planes had previously been transported on and off of ships. Seaplanes were hoisted in and out of the water, planes that had taken off from ships could not return and had to find somewhere to land and some planes just ended up plopping into the sea and being towed back.
In August 1917, Squadron Commander Ernest Dunning landed on the deck of HMS Furious. 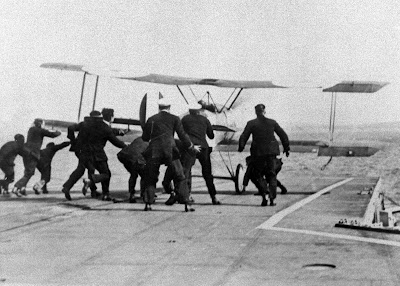 The plane basically hovered over the ship and a waiting crowd  pulled it down onto the deck. Clumsy, yet effective. Unfortunately, Dunning was drowned during further trials five days later, but his efforts changed sea warfare forever.
Another interesting Orkney flying  fact is that the flight between Papa Westray and Westray is the World's Shortest Scheduled Flight. It usually takes between two and three minutes but has been known to take only 58 seconds! 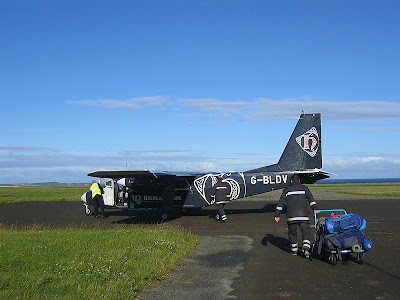 A lot of the northern isles teachers take small planes like this from  mainland Orkney out to their schools several mornings a week. There is space for about 6 people and the atmosphere is lovely. Sadly, there is no drinks and snacks cart. A video of the previous night's episode of 'New Tricks' was being offered 'round the Stronsay plane the last time I went, however.
What a lovely routine that must be. What could be better, an early morning flight, with a view of beautiful Orkney as you and your work chums sing "It's all right, it's okay, doesn't really matter if you're old and grey..." ?
I would insist on this Waterman Warble on the Friday afternoons however:
(The pilot could be Dennis Waterman and we could all harmonise in the back!)

Photograph of Dunning landing taken from our Photographic archive.

Photograph of islands plane taken from wikipedia.
Posted by archiver at 12:22