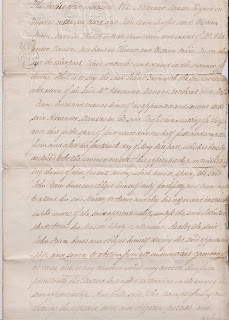 Today in 1799, John Bain was indentured as an apprentice to surgeon Alexander Manson in Thurso. An indenture was an agreement between servant and master, with the servant agreeing to work only for their master for a fixed time (in this case four and a half years) and the master promising to 'teach and instruct.' John also had to promise that he would not play cards or dice or indulge in such activities as may interfere with his work.

This type of clause seems to have been common. In 1768, 16 year old Thomas Balfour had to promise his mentor, Aberdonian George Skene, to avoid 'carding, nightwalking and all scandalous and debauched company.' If he did not abide by this rule, then he had to pay Dr Skene £20, which in today's money would be around about £1, 273,80.

Printing apprentices with William Peace & son had to sign a contract which specified a 'cheerful' demeanour and demanded an extra day's work for each day's absence without a surgeon's certificate. I was disturbed to read that a printer's apprenticeship was 7 years long compared to the surgeon's 4 and a half years. Should it take longer to be trusted with a tray of type than the task of cutting up a human body?

This 7 year apprenticeship for printing continued until well into the twentieth century. Indeed, we had to sign our lives away in blood when joining the archive. We had to promise on pain of death to always wear white gloves when handling documents which pre-date 1800 and if our bosses see us in a pub, then we have to give them our entire collection of Five Star Memorabilia before being forced to drink the meths that we keep to clean the sticker gunge off off the tables while they stand over us shouting "Like a drink do you? Well drink this!" It's all there in black and white and is pretty standard as archives contract go.