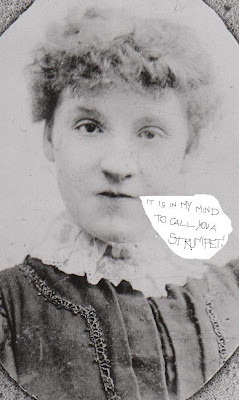 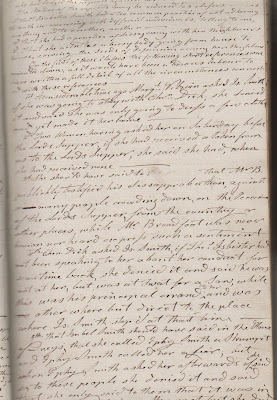 We hold vast quantities of Church records here in the archives with something for every Parish. Some parishes have several books and others only one or two.

The minute books are the best. They are basically a diary of what was going on day to day in the Church and the community.

What would you guess is the most frequent word that is mentioned in these books? Pews perhaps? Hymn? Charity? Lord?

The church elders took their position as the moral guides of their flock very seriously indeed and if there was even a hint of impropriety amongst the Parish folk, then the fornicators would be marched down to the church to explain themselves, apologize and be chastised in front of the whole congregation for several Sundays in a row. They even had a special stool, like a modern 'naughty chair' for them to sit on and sometimes, there was even an unbecoming sack for them to wear whilst they did so.

This blog is pure, so we shall not regale you with some of the more lurid tales that have caused many a reader to gasp in delicate horror. We did, however, chortle heartily at the chastisement of Isabella Smith of Stromness.

Isabella was basically a meddlesome gossip who was getting on the nerves of all her neighbours and causing trouble amongst the parishioners.

The Stromness church minutes for the 2nd of May 1815 (pictured above) detail her crimes:

She 'had a too common practise of not adhering to the truth in conversing with individuals, telling to one, one thing, and to another, another.' ...'She had a practise of disagreeing with her neighbours.'... 'That she acted as a busybody going from house to house, sowing the seeds of dissension amongst her neighbours.' ...'It would be a tedious labour to have written a full detail of all the circumstances connected to these references (complaints.)'

These notes are followed by a list of Isabella's (ridiculous and seemingly pointless) lies and the final accusation that she had called one Ephy Smith 'a strumpet'. Isabella denied this last, saying that it was only 'in her mind to call her a strumpet.'

The clerk again calls these complaints tedious and finishes his entry saying that the moaning session had had to stop as it had gotten too late to carry on.

Isabella does sound like a nightmare, but to be fair to her, the next week Ephy Smith and her boyfriend were hauled before the session as they had been caught fornicating, again, after having previously been suspended from the congregation for the same crime. So she did have point there.
Photo reference : L/37651
Church Record reference: OCR/FC/30/1
Posted by Archiver at 12:45