We are pleased to be hosting the 200 Years of Diaries Exhibition in Kirkwall and Stromness Libraries this summer until 11th July. It has been created by artist Dylan Jonas Stone and invites viewers to walk through 2 centuries of diaries from 1800-2000.

We have all enjoyed reading them and have picked out our favourites. This letter is my favourite so far. 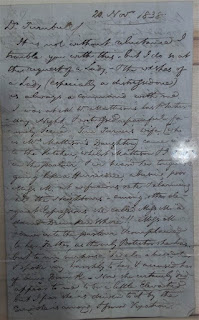 
It is not without reluctance I trouble you with this but I do so at the request of a Lady, & the wishes of a Lady (especially a distressed one) is always a command with me.


I was at Mr W. Mathison’s last Saturday Night & witnessed a painful family scene. Tom Farmer’s wife (who is Mr Mathison’s Daughter) came [into] the kitchen, whilst Mathison & I [were] in the parlour, & we heard her tongue going like a hurricane, abusing poor Miss M. at a furious rate & alarming all the Neighbours – among other elegant Expressions she called Miss M. “a damned Drunken Whore”!! Miss M came into the parlour & complained to her Father, as the only Protector she has, but to my surprise he also [abused her] and spoke very harshly to her & accused her of being Drunk. Now she certainly did appear to me to be a little Elevated but I fear she is driven to it by the crew she is among, & from Vixation.

An intriguing snapshot of a life in 1838 - Who was Miss M? Who wrote the letter? Did Dr. Turnbull help?

The exhibition enables the viewer to wander through every year of two hundred different people's lives: a boy scout writing everything he hears on the radio during WW2; a farmer seeing a car for the first time; all the films a teenager sees in the 1950s; an elderly woman in New England eating Thanksgiving dinner alone; a Belgian schoolgirl on a trip to Paris in 1906 who sees the headlines announcing the earthquake in San Francisco; the flight of schedule of an airline pilot from the 1960s and 1970s and a musician travelling to concert engagements around Europe in the 1980s.

The exhibition includes contributions from the Orkney community and from the Orkney Archive collection, from Thomas Stewart Traill's journal around war-torn France and Spain in 1814 to a Westray man's first trip abroad at the age of 54 in 1993.

We hope you will come in to look at the diaries if you visit Orkney this summer and let us know your favourite too. We will share some of your favourite diary entries on this blog for those of you who can't see the exhibition.
Posted by Dusty at 12:45