Its that time of year again when you can hear the distant sounds of skirling, fiddling, strumming, drumming and humming in the air - yes that's right its the annual Egg Scrambling Contest....

Only joking, of course its the brilliant (not biased at all) Orkney Folk Festival. And if you are in the town of Stromness or at some of the village ceilidhs these sounds won't be distant, but all around you creating a wonderful energy amongst all the locals and visitors alike.
If you're walking along the streets of Stromness or are unable to visit and wondering what it looked like in the past, here are a couple of maps to show you its development over the years. The first one is the Ordnance Survey map from 1903 and the second one is an Admiralty map from 1849. Double-click on the images to see them more clearly.
﻿
﻿﻿﻿﻿﻿﻿﻿ 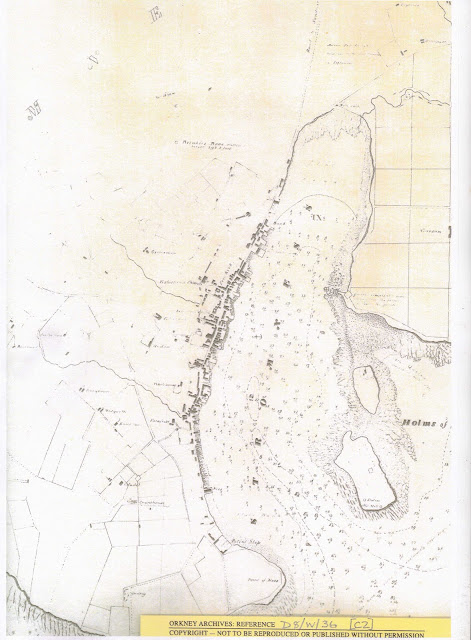 References D8/W/36 [C2] Copy (in two parts) of Admiralty plan of Stromness and Kaerston [Cairston] Roads. Surveyed by F.W.L. Thomas, Lieut. Commanding. Dated 1849. (This older map is not so clear to begin with and did not copy well.)

As you've probably guessed, I'm a bit obsesssed with Pirates and so tend to spot anything related to them in any other records we have. I was looking through our Customs and Excise Shipping Registers for Orkney from 1855-1904 and found a ship with the unusual name of Pirate!

Intriguing, I thought, I wonder who would buy a ship called Pirate. It isn't a name you would instantly trust. According to the register, it was built in Stromness in 1888 by Peter Johnston Copeland who also owned 16 shares of it which amounted to a quarter. Many people invested in ships as a way of making or saving money in the nineteenth century. Each ship was divided into 64 shares. The other three owners were Elisabeth Ross, James Spence and David Smith who all had 16 shares. Then in 1898 everyone except David Smith sold their share to William Cowper Ward which meant he had 48 shares. Then in 1900 both David Smith and William Cowper Ward sold their shares onto someone else and the ship left Orkney.

Where did it go? Who bought all 64 shares? You'll never guess...(well you might)....it was Francis Drake, master mariner from Braunton in Devon!!! And this Francis Drake was a direct descendant of Sir Francis Drake of the Elisabethan age who himself was considered to be, in some places, particularly Spain,  a PIRATE! 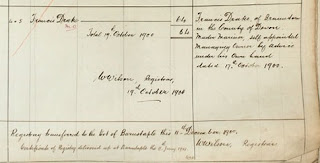 Ok that's my last blog on pirates...for a while anyway. I promise to write about other things from now on. Maybe eggs...

We have a new archive display [Now over] in the Archive Searchroom! Its all about pirates and particularly Orkney's famous pirate John Gow. 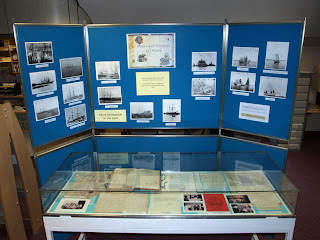 Gow was born in Wick in 1697. His family then moved to Stromness where he grew up before running away to sea. He rose to be second mate on the ship The George by 1724. When sailing from Santa Cruz on 3rd November that year, he and a few others of the crew mutinied, took over the ship and renamed it Revenge. They plundered around the coast of Spain and Madeira for a while, then came up to Orkney in 1725. Gow wanted to plunder the houses of the gentry. They raided the Honyman mansion, the Hall of Clestrain in Orphir and then headed up to Carrick House on Eday. It was here at the Calf of Eday that his ship ran aground and he was captured.  He was later tried and hanged in London.

Gow was the inspiration for Captain Cleveland in Sir Walter Scott's novel The Pirate.

Another pirate mentioned in the display is John Fullarton who, according to Ernest Marwick, possibly came from Stromness or Orphir and was known to be smuggling around the Channel Islands in the 18th century before becoming a privateer for the Royal Navy. Privateers had permission from the government to rob enemy vessels at sea. He soon became greedier and became a partner in a pirate ship with a Royal Navy captain called Keppel. He made a lot of money, some of which he spent on an estate in Orkney for his family. He was eventually shot by the wife of Captain Jones of the Isabella. She was then known as 'Mary Jones, the Pirate-Slayer'.

If you are in Orkney, please come along and see our display. It will be up until the end of June 2011 in the Archive Searchroom and I hope to put a copy of it on the wavy-wall in the library soon too.

Which is scarier, Dr Who or Press Gangs? You decide!

Tonight's episode of Dr Who has prompted me to put up this document for you all to see about press-gangs in Orkney. It was found recently by one of our volunteers in the Balfour Collection (Reference D2/19/16) and the contents are quite shocking. 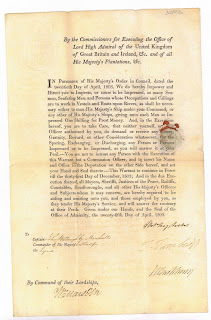 The rest of this document cannot be copied as the wax seal still holds it shut, but I have transcribed it by peering in one of the corners, the words in italics indicate handwritten inserts:

"I Do hereby Depute Lieut Wm Balfour belonging to His Majesty's Sloop Lynx under my command, to Impress Seamen, Seafaring Men and Persons whose Occupations and Callings are to work in Vessels and Boats upon Rivers, according to the Tenor of this Warrant. In Testimony whereof I have hereunto set my Hand and Seal this thirtieth day of April 1803."

Ernest Marwick goes on to describe several places where seamen hid from the press gangs in caves and peat stacks in Orkney and of men escaping up their chimney's and hiding on cliffs.
Posted by Dusty at 12:08 2 comments: