With the sad news that Darts legend Jocky Wilson died on Saturday I thought we'd look back at his first visit to Orkney (he visited, professionally anyway, twice). 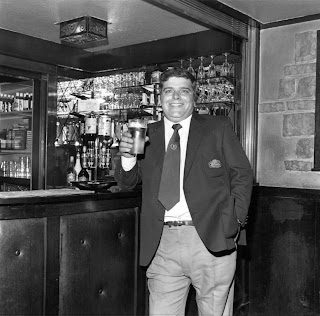 Jocky, aged 32 at the time, is seen in this photograph enjoying a pint in the Queens Hotel, Kirkwall. He was booked to play 20 local darts players for which he was to receive the handsome sum of £400. After the event Jocky told a local reporter that he had been a bit disappointed with his form on the night as he lost the first two games, but he did manage to beat the other eighteen!

For you statisticians out there during the whole event Jocky scored six 180s, sixteen 140s, eight 100 plus and sixty 100s.

Jocky is proudly showing his teeth in this photograph, every one of them false. Famously he had lost all his teeth by the age of 28 due to a combination of a love of sweets and a lack of brushing (take heed kids!) so when he won the World Championship he spent £1200 of his winnings getting some new ones made. He told a local reporter, however, that he removed them when he was playing darts because "the vodkas and coke don't taste right with them in".

In the present age of soaring fuel costs it's easy to think that things were better back in the "good old days". Well, unfortunately not!!

I'm currently cataloguing the records of an Orkney Estate, D15: The Halcro Johnston papers. The records reveal the history of the Coubister Estate in the Parish of Orphir and, once cataloguing is complete, will be an extremely valuable source for researchers interested in family history, farming techniques and practices, and a host of other topics too.

I came across the following two documents yesterday which reveal a startling rise in the cost of the tenant's main source of fuel, peat.

Both documents are lists of subscribers who have paid for the right to cut peats in the property of Greenigoe. The first, dated 23 June 1865, states that the subscribers agree to pay three shillings for each tusker of peats they cut. 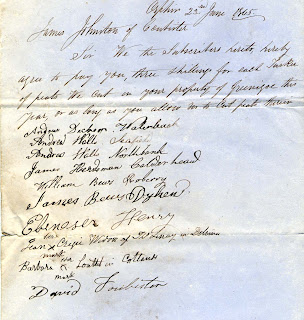 However, less than a year later on 24 April 1866 the subscribers agree to pay four shillings for each tusker. A price rise of 33%! 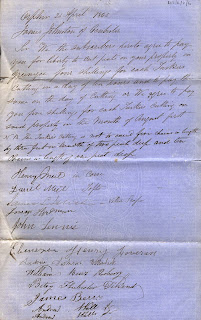 Not only that but, to rub salt in the wound, the Laird has also restricted the amount of cutting time﻿ allowed to ten hours a day and raised the price again to five shillings for peat cut in the month of August.

A tusker is an implement used to cut peats and traditionally a tusker of peats was measured as the amount of peat a man could cut from sunrise to sunset. This obviously varied depending on the fitness and stamina of the cutter as well as the differing length of day throughout the year, and on one reported occasion three men took turns throughout the day and managed to cut double the normal quantity!
Posted by The Fonds at 12:56 No comments:

It's that sieve again!

Here's an update on the use of sieves in punishments. While reading some very entertaining pages of the Presbytery of Orkney Minute book for 1639-1646, I found a curious entry about a woman called Janet Sutherland from South Ronaldsay:

"Ordaines the Brethren to make search in their congregations for Janet Sutherland fugitive from South Ronaldsay for turning the sieve and shiers, and to use diligence to put her home to her owne congregation to undergo orderly tryall" From the minutes for 3rd November 1643.

It turns out (pardon the pun) that sieve is another name for riddle, and in the Scottish National Dictionary there is the following definition and example of an explanation from 1825:

"As in English, a coarse-meshed sieve. Phrs: the riddle and the shears a method of divination (1) Fif., e Lth. 1825 Jam.:The riddle is set on its side, the points of a pair of large scissors being so fixed in it (separate from each other), that the riddle may be suspended by the hold taken of it by the scissors. One handle of the scissors is placed on the finger of one person, and the other on that of another. Some words, to the same purpose with the following are repeated : By St Paul and St Peter, did A.B. steal my yarn? or whatever is lost. If the person be innocent, the riddle remains motionless, if guilty it immediately turns round...This, among the other superstitious customs common on Halloween is also used as a mode of divination in regard to marriage."

This could be the reason why, as mentioned in a previous blog, the man was punished by being made to wear a sieve on his head.

Our first encounter with sieves here.
Posted by Dusty at 13:10 1 comment: