Watch out for those whirlinge tides!

This isn't as bad as Thomas Kirk's experience, but it is an interesting early description of Orkney and its dangerous seas.


"Orkneney are manie Ilands on ye [blank] of Scotland. ye biggest of which is not in length 16 mile in which the chief Towne is calld Kircwawe; these islands are plaine for the most part whereas Schetland is highe and mounteinous. they have store of cattle and of sheepe baringe good wool. they have plovers and partridge and hares but no wood." 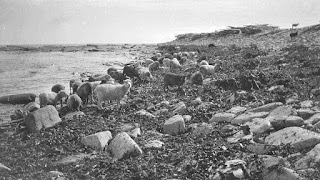 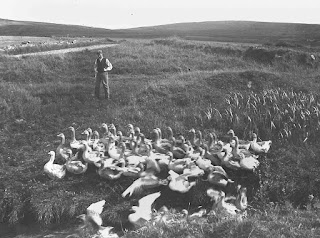 Sadly we have no photos of plovers, partridge or hares. TK1530 Geese. Date unknown.﻿

"The chiefe fisshinge place is the island of North ronnelsea. on ye other side is South-ronnelsea, betwixt which and Catenesse on the maine of Scotland runs a sea of 12 mile calld Penthland Frith, dangerous with manie whirlinge tides and currents which will sucke in sheepes and botes in the passadge" 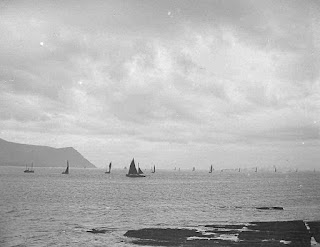 Everyday I write the book

Last week we had a visit from Tricia Marwick, Presiding Officer of the Scottish Parliament, and it was a real pleasure to show her around the archive. One of the documents that we showed her is a particularly treasure, D101 - The Wallace Manuscript, and looking at it again reminded me that it is not only a valuable historical record but is also a very lovely object.

The manuscript, written in 1684 and titled 'Ane account of the ancient & present state of Orkney', is probably the oldest written description of Orkney. It was written by the Rev. James Wallace, minister of St. Magnus Cathedral, and contains lots of information about the island, their plants, animals and much more besides. In many places he has illustrated his descriptions. Here's an example of his writing, about a particular fish caught in Sanday:

"Tuo years agoe, in winter, there wes taken a Strainge but beautifull fish in Sanda (where severalls of them had been gotten before) called be them Salmon Stour. Itt wes about ane elne in Length, deep breasted & narrow att the taile.... The flesh of the half next to the head wes Like Beef, & the other half next the taile, wes Like Salmond. The picture of which, as neer as I could draw itt, is heer sett doun."

﻿
He also wrote about St. Magnus Cathedral, described by him as "as beautifull statlie a structure as is in the Kingdom...And the steiple elevated to a great hight (standing on four statlie pillars) in which is a sett of as excellent & sweetlie chimed Bells as is in anie Cathedrall in the Kingdom".

We are delighted to have this document in our collection and we have to thank Highland Distillers, who purchased the manuscript at auction and presented it to the archive in 1998.

Remember the days of the old schoolyard

As we get older we all tend to think that everybody in positions of authority, whether its police officers, doctors or teachers, are getting younger. Well, a new acquisition we received this week takes this to a whole new level!

The acquisition includes a photograph, a letter and an autobiographical account of William Clouston's childhood and young adulthood in Orkney. William wrote about his childhood home at Houton in the parish of Orphir, where he was born in 1854, part of a large extended family of Cloustons living in the area.

William started school at five years of age. In those days schools consisted of one room where children of all ages were taught together. His first teacher was William Tait, an uncle, and he was followed by a succession of different teachers over the years until William turned fourteen.

Being the youngest of three brothers William had to attend school more than most of the boys. Older boys would have had to stay at home in the summer to help with farm work but William attended school both in the winter and summer. The result of this was that, aged fourteen, he was the top pupil at the Petertown school. At that time the teacher was William's cousin but he suddenly decided to leave for Newcastle and the school was left without a teacher for the summer term. So a group of local men met to discuss the problem, and decided to make fourteen year old William the teacher!

It must have seemed very strange to be playing with your school friends one day and to be addressed as 'master' by them on the next! William wrote that he managed the teaching part of his first day without too much trouble but when he went out at break time to join in the games he felt a little self-conscious!

William later worked in Stromness in a Drapers shop for some years before moving to Glasgow in 1874. After that he travelled to Michigan, USA, to join one of his brothers working in the lumber industry.
Posted by The Fonds at 11:29 No comments: