On this day in 1909 Ernest Shackleton, leading the Nimrod Expedition to the South Pole, planted the British flag 97 nautical miles from the South Pole, the furthest South anyone had ever reached at that time. 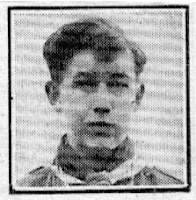 It was on a later Shackleton expedition to Antarctica, in 1921, that Orcadian Norman Erland Mooney was appointed as cabin boy on board the Quest. Norman was one of two boy scouts chosen from over 1000 to accompany the expedition, the other boy coming from Aberdeen. Unfortunately the ship did not have an easy voyage, encountering heavy gales as they left England which continued throughout the first leg of the journey through the Bay of Biscay to Lisbon. Suffering severely from seasickness the initial word was that 16 year old Mooney would leave the ship there and return home but the plucky (some might say completely crazy!) youngster stayed on board for the next leg to Madeira. But the seas got worse and on reaching Madeira the doctor decided that enough was enough and sent Norman home. Shackleton himself sent Norman's parents a telegram declaring "regret necessary action solely in boys interest, he was always willing". 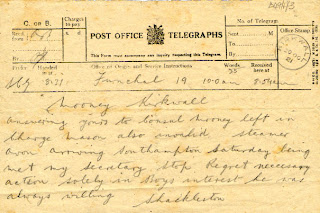 This wasn't the end of Norman Mooney's adventurous ways. In 1929 he passed the Colonial Survey examination and received an appointment in Nigeria as a mining surveyor.
Posted by The Fonds at 14:29