Alice, Margaret and Their Rivers 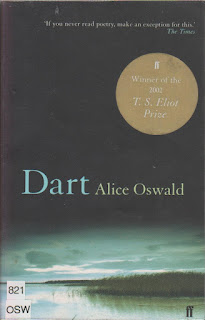 The St Magnus Festival has drawn to a close once more and, yet again, some fabulously talented performers have thrilled, moved and delighted both Orkney dwellers and visitors alike.


The poet Alice Oswald performed her work in both Stromness and Kirkwall and amazed audiences by reciting lengthy selections from several of her collections FROM MEMORY. With one foot tapping in time with her poetry's rythymn, back-lit by the stained glass sunlight of King Street Halls, she seemed, as a fellow audience member put it, 'a force of nature'.

On Monday, she shared a couple of excerpts from Dart, her T.S. Eliot Prize-winning 2002 poem which follows the River Dart from its source - Cranmere Pool on Dartmoor - to the sea.

This reminded me of Margaret Tait's film Orquil Burn which followed a body of water from the sea in search of its source. When writing about its making, Tait said:

"Strange, strange people asked me why I went from sea to source and not from source to sea. 'Why not' they said, so so puzzled, not the more obvious the more logical direction of source to sea. It was a voyage of discovery. Exploration. They wanted me to know beforehand where it started, what it all is. A river is known in its busy part. You follow it up. Those puzzled people think you know it all, so you can start with the Source, the cause, and demonstrate the issue. All already known." D97/32 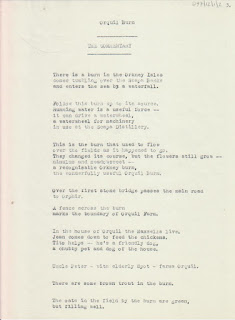 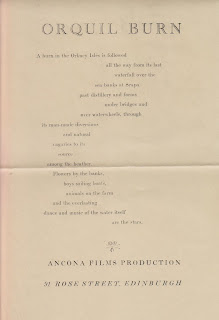 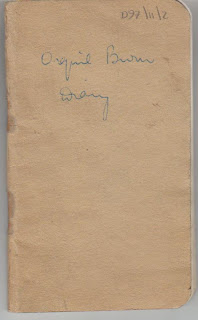 We are an award-winning archive, yes, (see below) but we are not afraid to admit our weaknesses which are as follows:

We are too fond of Tunnocks teacakes. We shut them in drawers and put Orkney Library bags over them but they call to us still.

We are too good at singing. The customers have complained about our pitch - perfect 10am renditions of 'Nessun Dorma'. When that last high note is hit, the ensuing vibrations shuffle documents out of page order and cause pencils to wobble.

We are too polite and  forgiving of chatter. Masochists must look elsewhere for 'strict librarian/archivist' thrills.

We have too few examples of Orkney knitting patterns in our collection. 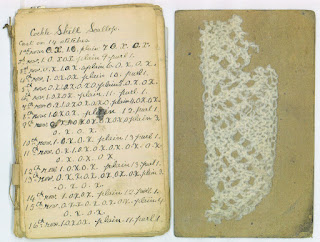 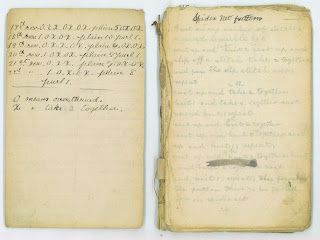 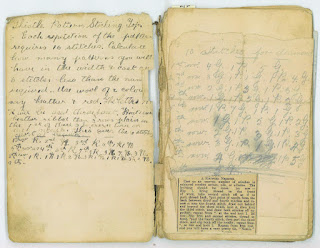 The images above are taken from Orkney Archive D1/254 which is a notebook kept from childhood by Helen Nicolson of Brims, Longhope. Helen was born in 1853 and died in 1938. She kept careful note of the knitting patterns she used and even included an example of a pattern tucked inside the front cover.

There are many books on Fair Isle knitting and we have a handful on Shetland patterns, but why no Orkney tomes? We are frequently asked for examples of Orcadian patterns and Helen's book is the only one which we can provide.

Perhaps we should start an appeal?

We are humbled, it's been a journey, We'd like to thank our parents... 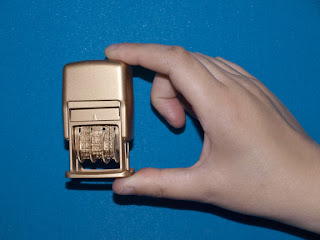 We are overjoyed to announce that we've won something! Ok, it's a library award but we're claiming it anyway! And it was awarded by a professor and president so he's got to know what he's talking about.

The Golden Book Stamp Awards were conceived of as a light-hearted way of acknowledging some of the creative and imaginative work being undertaken in 's libraries.  Some people think stamping-books is all librarians do so the use of the date stamp for the awards is intended to challenge some of these perceptions in a humorous way.

Professor Peter Reid, President of the Chartered Institute of Library and Information Professionals in Scotland (CILIPS), said: "It is so important to recognise and acknowledge the excellent and innovative work being done in libraries across Scotland to enrich our wider society.  I am delighted to recognise Orkney Library and Archive with the technology award for its achievement in the use of social media. I am particularly impressed with its Archive blog which brings to life the richness of the archive collection and the crucial role it plays in safeguarding and promoting the Islands cultural heritage.  This award is thoroughly well-deserved".
Posted by The Fonds at 12:38 5 comments:

a) What on earth are these animals supposed to be? Sheep? Rabbits? Goats? Llamas? Wolves wearing ram masks?   (D8/E24) 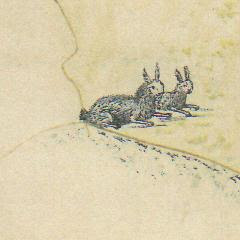 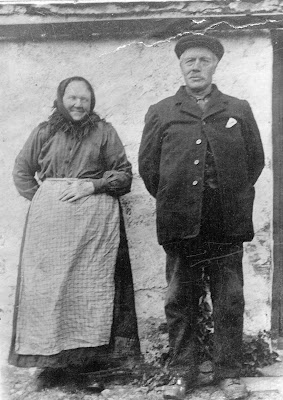 c) What should we have for our tea?﻿

I Didn't Call Him a Liar, Just an Untruthsayer! 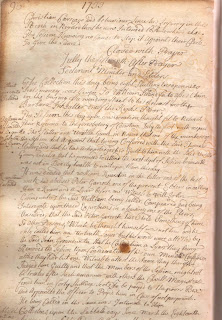 Today, we have been looking through the Orphir Church records on behalf of a family history researcher. We didn't find the people we were looking for, but were reminded of how small some of supposed crimes brought to the church elders' attention were and how disproportionate the punishments.

The children of Thomas Inksetter of Buxa were twice hauled up in front of the Church committee for the sin of 'breach of Sabbath'. In May 1728, they were flouting the Lord's day 'in taking a sheep with their dog'; and in October 1732 they were spotted by some neighbours 'carrying a burden in time of Divine worship'.

That's right, not only were they seen CARRYING SOMETHING on the Sabbath, they were carrying it while the Church was in session. The investigation into this incident went on for several weeks, with both children being brought before the elders and either denying all or saying they were too sick to attend. (The classic get-out clause from P.E. lessons to Sabbath Breach chidings.)

At no point does anyone ask why the witnesses to their crime were not at church either...

Later on in the saga, the burden is sensationally  revealed to have been a quantity of butter 'stealth from David Louttit on the same day.'

Catherine Slatter was accused of 'uttering imprecations' against neighbour Elspeth Scott when quarrelling about a piece of grass; this charge was stoutly denied and both women were told to grow up ( or 'exhorted to peace and a better agreement'.)

Three women were charged with the 'sin of uncleanness', (fornication, that old chestnut) in the same Church session. One Margaret Inksetter was accused of carrying the child of a married man, one Margaret Garrioch was pregnant by her boss's son and one Marjory Gorie admitted that she had been 'in her naked bed' in the presence of one James Cloustone but that he had been fully clothed throughout and that there had been 'no carnal dealing.' She may have been lying though as she had his baby several months later.

Couples accused of ante-nuptial fornication could either sit in the 'Publick place of repentance', a sort of 18th century naughty chair, or pay a fine of £4 which, considering that a male domestic servant's yearly wage in the 1790s was not much over £5*, was a considerable price.

The best entry is Peter Garrioch's complaint against the 'abuse' he suffered from William Knarston. According to Peter, William called him 'a Knave and a Lyar before one witness.' William poo-pooed this telling of events, insisting that 'he only called him an untruth-sayer.'

This verbal trickery did not fool the Church elders and William was fined 40 shillings by the Civil magistrate.