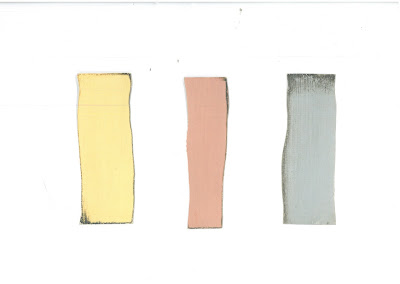 The right answer will win you both our eternal esteem and any Celebrations we have left in the tin. (No promises made).

We shall reveal the answer tomorrow afternoon...

This year, 2017, marks the 100th Anniversary of the publication of The Spy in Black by  J. Storer Clouston.

He did not just write this one book though, he wrote many novels in his lifetime and his style was on a par with Compton Mackenzie and P.G. Wodehouse. His plays were performed in London West End theatres and The Spy in Black was made into a film, starring Conrad Veidt.


P.G. Wodehouse wrote: "I have always been a tremendous admirer of your work. I think I have everything you have ever written."

Joseph Storer Clouston was born in Carlisle, Cumberland on 23rd May 1870. His father was Sir Thomas Clouston of Nisthouse, Harray, Orkney. Sir Thomas became a mental health specialist and was appointed Superintendent of Garlands, the Cumberland and Westmorland Asylum in 1863. His mother was Harriet Segur Storer who came from Connecticut in USA.

His sister Augusta Maud Clouston was born in 1872 also in Carlisle. She became Lady Wallace when she married Sir David Wallace, an Edinburgh surgeon, on 5th April 1905 in St. Giles, Edinburgh.

His father became Physician Superintendent of the Royal Edinburgh Asylum in Morningside in 1873 and moved the family to live in Tipperlinn House, Edinburgh when Storer was 3 years old.

His brother Thomas Harald Clouston was born in 1876. He later married Ada Mary Stuart and lived in a house called "Langskaill" in London and was proprietor of Gairsay.

Storer was educated at Merchiston Castle, Edinburgh and later at Magdalen College, Oxford.

In 1895 he was called to the Bar and on his marriage certificate in 1903 his occupation was "Barrister at Law", although he never practised and became a writer instead.

On the 11th March 1903 at the age of 32, Storer married Winifred Bertha Clouston, aged 21, in St Andrews and St Leonards parish church in Fife. Winifred was a distant cousin whose family also originated in Orkney. Her grandfather was the Rev. Charles Clouston minister of Sandwick and Stromness and also known as a physician, botanist and meteorologist.

From 1903, Storer is recorded in the valuation rolls as the tenant of Smoogro House in Orphir. The estate was owned by his father.


In 1913, Sir Thomas Clouston transferred the ownership of the house and the estate to his son.

The family spent their time in Edinburgh and London and their summers in Orkney.
Novelist

Joseph Storer Clouston grew up with a love of writing and history. He wrote many novels full of social commentary and light-hearted fun. Here is a small selection of his novels: 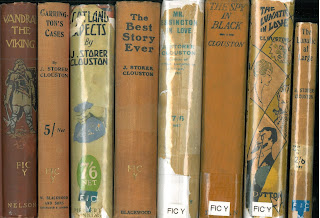 One of his first novels combined fiction with his knowledge of Norse history. It was reviewed by The Spectator in 1897: 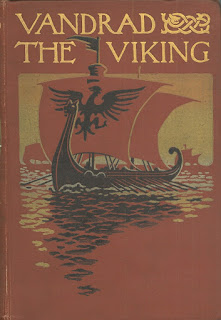 "Mr Clouston gives in the story an abundance of the fighting, and a fair amount even of the drinking, that are generally associated with Viking stories. But he also introduces the rather uncommon elements of a feud and a spell, a hermit, a seer, and a mysterious maiden."

Here are a small selection of J. Storer Clouston's novels. We have about 38 volumes in the Orkney Room.


Storer wrote a series of novels about a 'Lunatic'. Here are some reviews for The Lunatic in Charge, published in 1926.

"Here is Mr Clouston with another riotous study in irresponsible lunacy." Sunday Express

"Furious farce, but a capital book for the sea-side at eighty-five in the shade." Observer 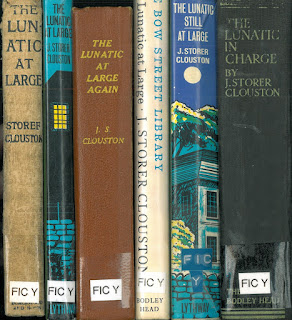 "It is very pleasant to have Mr Mandell-Essington at large again. He is still the charming companion that everyone seems to find him, and his adventures flit from one extravagance to another in quite the old way. " Daily Telegraph
The Spy in Black
This year marks the centenary of the first publication of The Spy in Black.
Made into a film in 1939 starring Conrad Veidt, who gives his opinion of the book here:
Some reviews of the book here:

J. Storer Clouston wrote plays which were performed in London West End theatre, such as The Pocket Miss Hercules at the New Royalty Theatre:

J. Storer Clouston co-wrote the pageant script with Eric Linklater which was performed by about 600 actors as part of the St. Magnus Cathedral Octo-centenary celebrations in 1937.

J. Storer Clouston also wrote and edited Orkney history books and contributed articles to journals. He was founder member of the Orkney Antiquarian Society and collected old Orkney documents some of which are in Records of the Earldom of Orkney 1299-1614.
The Storer Clouston Archive Collection fills 39 boxes and is stored here in one of our strongrooms under reference D23.

In the Orcadian the following week, Dr. Hugh Marwick published an "Appreciation" for his friend.
Here are a few quotes:

"he had identified himself so intimately with Orkney public life and affairs, and his name is so indissolubly associated with the written history of these islands that it is difficult for us to think of Orkney without...thinking of him."

"A more acute, penetrating and imaginative intelligence on work in which he was interested, it has never been my privilege to meet."

"to me, at least, his death seems not unlike the blowing out of a lamp, leaving me sitting in a dark room."
Posted by Dusty at 16:34 No comments: 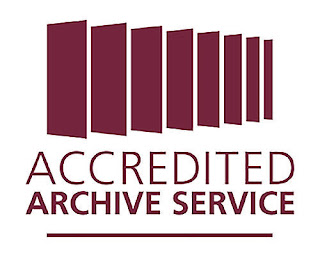 It was announced this morning that Orkney Archive has become one of a select group, those UK archives that have been awarded accreditation. In Scotland it seems to be even rarer, in fact the number is still in single figures. So we're very excited!

What this means is that you can all be sure that we're looking after the history and heritage of Orkney in the best way possible and adding new documents and collections so that they will always be available to researchers the world over.

We'll probably spend a few days patting each other on the back and smiling at nothing in particular, or maybe at our dedicated band of volunteers, but not for too long. Oh yes, we've got plans. Just one of these involves our catalogue. We've had a dream for a while now that our full archive catalogue will be available online, making it easier and more convenient for anyone to search our collections. We're not quite there yet but hopefully before too long...

Onwards and upwards!
Posted by The Fonds at 11:39 No comments:

Email ThisBlogThis!Share to TwitterShare to FacebookShare to Pinterest
Labels: accreditation 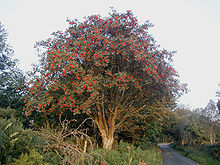 We have written before about scoffing at old-lady-winter-tales and then being proven wrong.


Well. We have a wonderful view of some Rowan trees from our archive window and a couple of weeks ago we noticed aloud how abundant their berries were this year.

'Ah, but ye ken what that means noo?' ... a wisdom filled voice from the farthermost microfilm reader declaimed... 'the mair berries there are, the longer, colder and DARKER the winter will be...!'


Reader. there was a LOT of berries on those trees. Sob.


'But it is not winter now', I thought. 'I have plenty of time to prepare for the cold Orkney winter.'


According to the folklorist Ernest Walker Marwick, Orcadians used to reckon that Winter started on the third Sunday of October, which was aptly named Winter Sunday. This was connected with Winter Saturday when all the young cattle from the hills were taken down to the byre. To find out more, come to the archive and listen to the tape of the October episode of his BBC radio programme 'Island Calander' - reference D31/BBC/4.


And then cry a million tears over your lost Autumn. (We don't even get the cool Autumn leaves as we have no trees.....)
Posted by archiver at 18:49 2 comments: