Our last post has inspired our group and other researchers to try different sources and find more information about James Keith and the jewels.

We now have two leads for the origin of the jewels:
a) with James Keith from Benholm and Dunnottar Castles or
b) a shipwreck in Shetland.
Option a) was our first lead and the family which were intricately connected with the Keiths during this time period were the Strachans. The Clan Strachan Society website has information on the story of the robbery from Benholm Castle

I wrote to the Clan Historian, who replied with the following information:

I would refer you to an article in our newsletter, page 3. I wrote it from a Strachan perspective, but it has some information you may be interested in, much of it from the book "Bonnet Lairds" by Colin Thornton-Kemsley:

"early 1623, while the Earl Marischal, then aged 70, was away from his castle of Dunnottar, his Countess, her son James and Sir Alexander Strachan - in secret and cover of darkness - carried the whole furnishings and valuables from Benholm Castle and Dunnottar to Thornton, where the Countess went to live with the Laird while the Earl Marischal was still alive"
Regarding your blog, it was not just James Keith and his mother, but Alexander Strachan of Thornton (his mom's lover) who all took belongings and valuables from Dunnottar and Benholm back to Thornton, where they all lived while the Earl Marischal was still alive. This tells you about the relationship (or lack thereof) James Keith had with his father. The three of them took up residence at Thornton thereafter. Also

After some legal banter back and forth, a settlement was agreed upon by the parties. The Countess Marischal, now married to Strachan, had to yield up the heirlooms but she was permitted to retain her share of the jewellery and a large proportion of the plenishings. The lands and barony of Benholm were conveyed by James Keith to his stepfather Sir Alexander Strachan who then surrendered them to the new Earl Marischal.

One question remains to me that if the jewels rightfully belonged to James Keith, then why were they to be conveyed to the Earl of Morton when possible?

Option b) might explain this. Our last post (Iron Box of Jewels #3) was shared on the Institute for Northern Studies Facebook page and we received this suggestion from Colin Dicke:

"On the 2nd March 1653 the VOC [Dutch East India Company] flute Lastdrager went aground on the Island of Yell in Shetland. The ship had previously been damaged in a storm as it attempted to navigate the English Channel on the way to Batavia (present day Jakarta).

It was rumoured that the ship was so heavily laden with contraband that the Captain would not allow the cargo to be unloaded for proper repairs to be undertaken on the island of Texel. So when it set sail again, it was already in poor condition when it was hit by a second storm, and quickly broke up on the rocks.  One survivor was an 18 year old boy who later gave a detailed account of the events that followed. After finding refuge in a blacksmiths workshop, the boy (Johannes) and the other 22 survivors managed to rescue a few chests of silver and brandy. Johannes troubles were only beginning, however, as the men drank the brandy and squabbled over the silver, with some attempting to kill the others to make away with their share. Johannes however managed to convince a smaller group to attempt to get back to Holland, and together they managed to recruit the assistance of the local laird, Ninian Neven. With the aid of Neven, the remaining crew managed to fend off other attacks from the breakaway group. And, using some of the retrieved silver they purchased a ship suitable to take them back to Holland. The remaining treasure was buried nearby.

On the 29th March (Johannes gives the date as 8th April), James Keith of Benholm arrived in Yell with a band of 60 soldiers in search for the shipwrecked treasure. According to Johannes, Keith was unsuccessful in stealing any of the silver, but in the skirmish that ensued Nevens daughter was attacked, then shot. She died soon afterwards. Eventually Johannes and the others made his way back to Holland and in the following year to his destination of Batavia. On the 11th January 1684 he was appointed Governor-General of the Dutch East Indies. In the 1970s the site of the shipwreck was dived by the underwater archaeologist Robert Stenuit, who recovered many items including early examples of golf clubs and clay pipes. No more silver or valuables have been publicly recovered.

This may be irrelevant to your quest, but it could well be possible that Keith was able to recover some of the contraband treasure. Some of which may be referred to in the documents you cite."

So, if Keith was able to recover some of the treasure and as he still factor for the Earldom Estate at the time would he have acted on behalf of the Earl of Morton? Would that be why the jewels should be passed on to the Earl when he came out of exile? The Palaeography Group are currently transcribing a document from 1653 which mentions James Keith, Shetland and silver. Hopefully it will shed some more light on this particular story.

One of our regular followers helped us to discover a word in the original document which we were puzzling over. The word looked like pikworth at first and we thought it might be a measure of gold, as the phrase looked like "a pikeworth case of gold".
Our follower GenKnit (and her daughter) soon discovered that we were wrong and that the word was in fact "piketooth" which today would be "toothpick" and therefore the phrase would be a "a piketooth case of gold". Here is what one might have looked like, taken from this website. 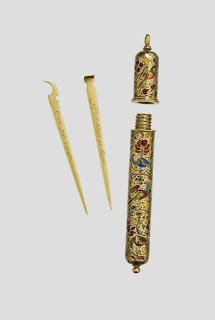 Thank you to all who have helped so far. We will continue to research this mystery and report any findings we make. If you have any ideas for information, please comment below or contact Orkney Library & Archive through our Facebook or Twitter pages. http://www.orkneylibrary.org.uk/
Posted by Dusty at 13:23 6 comments: