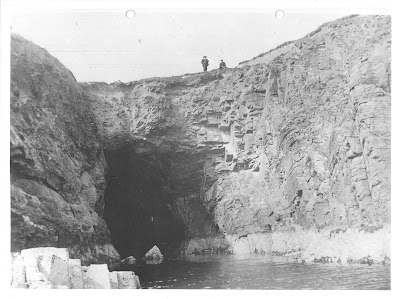 This photograph was taken in South Ronaldsay in the early 19th century, but we don't know where. Can you help?

Here are a few items from our fifth instalment of our Orkney At War exhibition. These archive items are taken from records during August, September and October of 1915. We continue with the diary of Margaret Tait. We find out about meat supplies in Orkney, employability of men with hernias, schoolchildren in Walls, see huts in St Margaret's Hope and much more. It is now a year since the beginning of the war.


(Sunday) I am sitting down on the garden seat and the air is mild and pleasant and the flowers are blooming lovely. The berries are all ripe on the trees and quite ready for picking. Ruby Marwick is up on top of the dyke or garden wall, which divides their place from this. She is the only sign of life about the place and everything seems very quiet and still. I can see the town clock from here and it is just 6. I was up the willows for a walk this afternoon but it came on a drizzle so I didn’t stay long. This last week a liner was torpedoed off the Birsay coast by a German submarine  and the crew brought into Kirkwall. One of the crew proved to be a german (supposed to be a spy) and was kept aboard the submarine. The mail boat (St. Ola) on her way to Scrabster was ordered to turn and go back to Stromness one day last week. Anniversary services are to be held in the churches next Wednesday (4th) evening, it being a year since the war began. Rita Middleton stayed to tea tonight as there were stewed prunes. Jim is in Deerness for the week-end.
The shop will soon be finished now and will look very nice. Yesterday morning the boarding was taken down from the front. The office is finished. The little front shop will be finished this incoming week. The house is lying as bad as ever. Since the war the beef has gone up to ¼ per lb and not even fresh at that. 2 half loaves are 9d, before the war they were 6d. Sugar 4d per lb, before it was 2d. Nearly all foodstuffs have gone up in proportion and coal is now 40/- per ton. Last Saturday week (24) was the anniversary of poor Jackie’s death, so I went up and cleaned all the weeds out of the grave and placed a posy of forget-me-nots on it which I had planted specially. Then I went up and had a look at poor Mrs. Wylie’s grave.


A YEAR OF WAR
INTERCESSORY SERVICES AT KIRKWALL


The anniversary of Britain’s entry into the war was marked throughout the county on Wednesday by services “of humble prayer to almighty God on behalf of the nation” In Kirkwall a joint intercessory service was held in the evening in St Magnus Cathedral, at which there was a large attendance. The Rev John Rutherford opened the service with prayer, and the reading and devotional exercises were conducted by Rev. Gee, Millar and Mr Wm. Barclay. An appropriate address was delivered by the Rev. John M. T Ramsay, St Andrews. A collection was taken up on behalf of the Britain to Poland Fund. 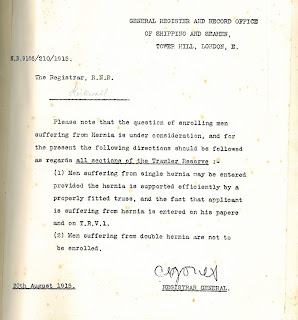 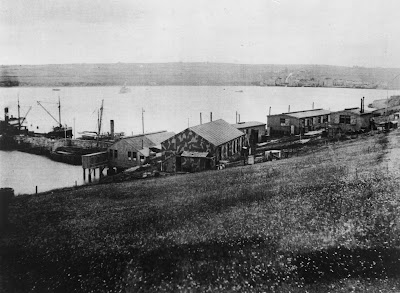 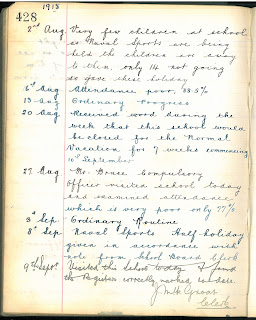 1915, [page] 428,
2nd Aug - very few children at school as Naval Sports are being held the children are away to them, only 14 not going so gave these holiday.
6th Aug - Attendance poor, 88.5%
15th Aug - Ordinary progress
20th Aug - Received word during the week that this school would be closed for the Normal Vacation for 7 weeks commencing 10th September.
27th Aug - Mr Bruce Compulsory Officer visited school today and examined attendance which is very poor only 77%.
3rd Sep - Ordinary Routine
8th Sep - Naval Sports Half holiday given in accordance with note from School Board Clerk.
9th Septr. - Visited this School today & found the Register correctly marked to date. J.M.F. Groat, Clerk. 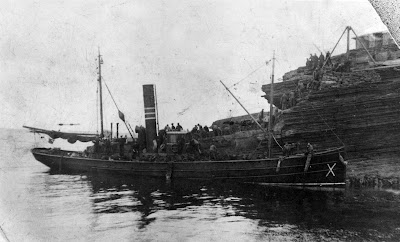 Supplied of Meat. in view of the increased demands for meat by the British and French Armies and of the relative shortage of vessels equipped for the conveyance of meat from overseas, the Board of Trade wish to call the attention of the public to the great importance of restricting the consumption of meat with a view to economising the national supply and avoiding excessive increase of price. Board of Trade, 20th May 1915.

It was agreed on the suggestion of Bailie MacLennan to call the attention of the Local Government Board to a way in which the food supply might be supplemented, vizt., by utilizing the patrol trawlers when possible in fishing.


Messrs LEADBETTER & PETERS Deeply regret that it will be impossible to visit Orkney this year owing to Admiralty restrictions. Although applications for permission to visit Orkney have been made both by letter and personally at the Admiralty, this permission has been refused. Messrs. Leadbetter and Peters are sincerely sorry for the inconvenience which will thus be caused to their numerous clients in Orkney and take this opportunity of returning sincere thanks for all orders received during past visits. They will take the earliest opportunity given to them to again visit Orkney as usual. 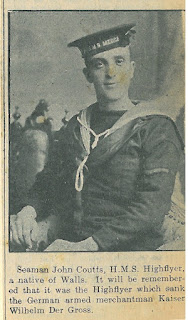 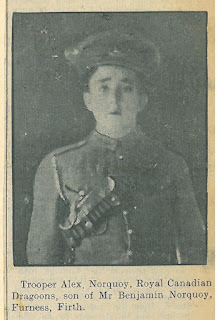 WOUNDED SOLDIERS
News has reached friends in South Ronaldsay that two soldiers belonging to this island were wounded recently. Lance Corpl. Wm Cumming of the Seaforths is said to have been dangerously wounded in France and Pte. John Loutitt of the Seaforths is also wounded although slightly.
Information has also been received that Pte. Robert Laird of the 8th Battalion Seaforths, a native of Burray was wounded on 25th September. His wound which is in one of his legs is not thought to be serious.
We understand that a large number of Orcadians have suffered in the recent fighting. We shall be glad if relatives will co-operate with us in making the details for our roll of honour as complete as possible.


DECORATED BY THE KING


On Friday 1st inst. At Buckingham palace, His majesty presented board of trade medals for gallantry  in saving life at sea in various parts of the world to a number of sailors. There were fifteen silver medallists and three bronze medallists each of whom was personally decorated by His Majesty.  Among the list we observe the name of Mr Henry Linklater, who is the eldest son of Captain H Linklater, The Holms, Stromness. The circumstances are these. “Two members of the crew of the steamship Cawdor Castle of London, Henry Linklater chief officer and B. Green seaman were given the silver medal for helping in the rescue of the crew of the schooner Lucie of Mauritius, which was in a sinking condition in the Indian Ocean, in January 1913. The Cawdor Castle launched a lifeboat which, under the command of Mr Linklater and manned by Green and five other men (who have already received their medals), proceeded to the Lucie. The boat was manoeuvred under the stern of the Lucie, and the crew of the eight men were taken off one by one by means of ropes in a heavy sea”
Archive Reference: D1/525 - Journal of Margaret Tait, 1911-1918﻿

20 October 1915
The weather has been lovely these last few days, almost like summer and such lovely moonlight evenings. Had some fine walks with Bunty. Fancy its 2 months since I wrote last. Kirkwall Bay is still crowded with foreign ships coming and going all the time. I hear they are not to be taken in to Kirkwall any more but to be sent to Shetland, and Kirkwall is to be made a base for torpedo destroyers. There’s no sign of the war coming to an end, indeed it seems farther off than ever. Bulgaria has joined now against us.
The shop has been opened up a few weeks now but the house still looks as if a cyclone had passed through it.
Another Zeppelin raid on London last week killing about 40 and wounding over 100. Great damage to property. That’s the second Zeppelin raid within the week, the first one doing not so much damage.

Click on the label "Orkney at War" below to see more blog posts on this subject.
Posted by Dusty at 16:12 No comments: