We have now finished cataloguing the photocopies of this year's Fereday Prize projects. And what an interesting bunch of subjects this year! The best thing about these projects is that they often cover the history of businesses, people and places from the 20th century and they become a wonderful addition to our existing collections of archives from earlier in history.

This year, there were two first prizes, one from Kirkwall and one from Stromness. From Stromness, Thomas Penny wrote a brilliant account of the history of Motoring in Harray which includes information on the earliest cars and buses as well as interesting interviews with some of the residents of the parish over the years and much more. It's great to read about all their stories. 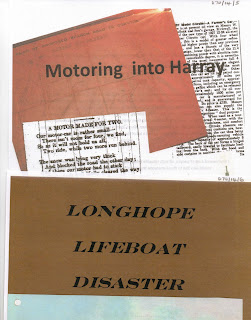 From Kirkwall, Douglas Corse writes with such feeling of the Longhope Lifeboat Disaster of March 1969, when the lifeboat was lost with all her crew. Douglas has included an interview with his great auntie which adds a personal view to this tragic event and finishes with the poem The Lament for the Longhope Lifeboat by Andrew B Irvine which, he tells us, was read out at the funeral.

If you did not receive a prize from the Orkney Heritage Society for your project, but still would like to leave a copy in the archives, we would be delighted to receive it. Just drop by sometime and we'll take a copy and give you back the original.

If you would like to see any of this year's projects, the Archive Reference number for each one begins with D70/14.
Posted by Dusty at 18:18 No comments:

When a child is born

Rejoice readers, your usual blogger archiver is now the proud mother of a very lovely daughter! We are all cock-a-hoop at this and wish them many hours of undisturbed sleep. They may now be considering a christening and if so this might be a good time to issue the following warning. John Firth wrote in "Reminiscences of an Orkney Parish" about the dangers of baptising a girl directly before a boy. If this happened "fears were entertained that the girl, on reaching womanhood, would be afflicted with a full flowing whisker, while the other would remain beardless to the end of his days". Think this is unlikely? Well just take a look at the photograph below. You have been warned! 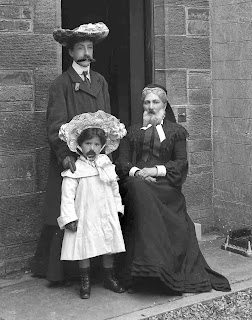