A Royal Wedding and its Consequences

In the Balfour papers, I recently found this curious letter - why did the Prince of Wales send £10 to a Shapinsay man in 1863? 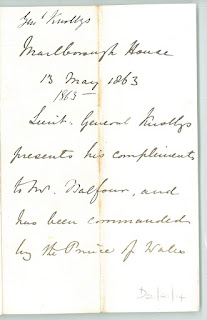 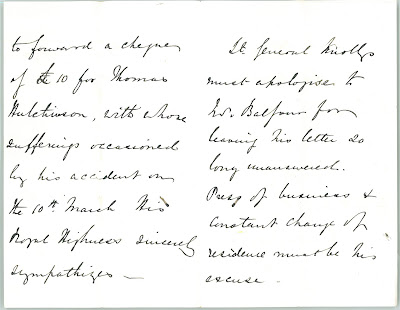 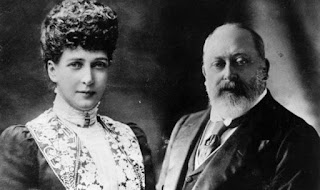 On the 10th March 1863, Edward, Prince of Wales, eldest son of the widowed Queen Victoria and Prince Albert, married Princess Alexandra of Denmark at Windsor Castle. Celebrations were held across Britain, including Orkney. In Kirkwall there was a service in the Cathedral, a procession, illuminations and fireworks; in Stromness and elsewhere all over Orkney, fireworks and bonfires. 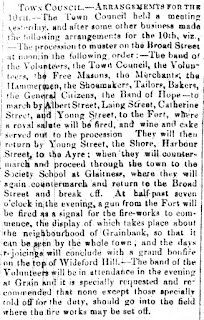 ORCADIAN 7th March 1863
On the island of Shapinsay, a 21 gun salute from Balfour Castle was to be the big event, despite the fact that David and Eleanor Balfour of Balfour Castle were in London joining in the capital's celebrations. 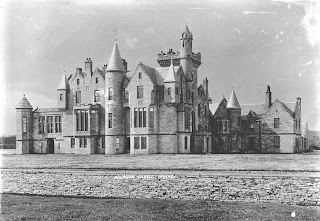 BALFOUR CASTLE (Ref TK2572)
At noon on the day, the old howitzers at the Castle made 20 firings, but with that last 21st shot - disaster! Tom Hutchison, a crewman on David Balfour's yacht, and just 26 years old, was ramming home the charge for the final effort when the gun went off and the ramrod took away his right hand and part of his arm. His knee was also severely cut.

Tom was taken by skiff immediately to the Balfour Hospital in Kirkwall (the present West End Hotel) coming into the Mainland at Carness, then into Kirkwall. Doctors Duguid and Mitchell amputated his arm just below the elbow and 2 days later Dr Mitchell writes to David Balfour to tell him there has been an accident and Tom has had his lower arm and hand amputated - let us hope plenty chloroform, the anaesthetic of the day, was available and administered. 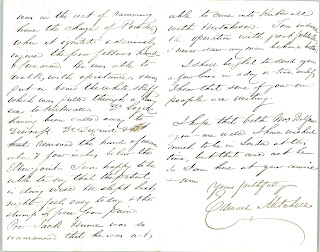 Letter dated 12th March 1863 (Ref: D2/14/21)
Two weeks later he is improving and it is reported he also has an eye injury. On the 6th April, Robert Easton updates David Balfour advising that Tom "is very white and shilpit-like but in tolerable spirits which rose as he began to speak of his child who is one of the darlingest bairns that ever was seen - the wound is still discharging and he is very weak" 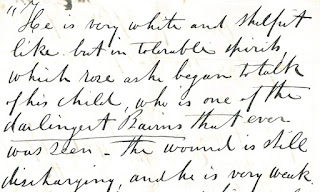 Letter dated 6th April1863 (Ref: D2/14/21)
Over the next weeks David Balfour's correspondents ask after Tom Hutchison. The enquiries after him from the upper end of society culminate with the letter dated 13th May 1863 (see image above)from General Knollys at Marlborough House to David Balfour, enclosing a cheque for £10 from the Prince of Wales himself for Thomas Hutchison "with whose sufferings occasioned by his accident on the 10th March His Royal Highness sincerely sympathises".  That £10 equates roughly to £1000 today. Thereafter Tom Hutchison, with his one hand, fades from the Balfour papers, leaving me wondering what happened next.

1861 Census
﻿
Her father is John, a farmer, her mother is Barbara Tait, all born in Dunnet, Caithness. There were various Duhams, sometimes Durrans, in Shapinsay at the time perhaps encouraged there by David Balfour's Caithness-born factor, Marcus Calder and the Tait side of the family, also from Caithness, at Quanterness Farm, outside Kirkwall.

Tom's parents were Thomas Hutchison and Mary Nicholson, both born in Shapinsay. Interestingly the witnesses to the marriage of Tom and Elizabeth were the Laird himself David Balfour of Balfour and Trenabie and his factor, Marcus Calder. Perhaps this was not an unusual courtesy in Shapinsay at the time, or there was a friendship between Laird, factor and yachtsman.

Tom and Elizabeth are in Kirkwall by the 1871 census, living in Queen Street. They have 4 children, a servant, 3 boarders and 4 lodgers ["boarders" expect accommodation and meals; "lodgers" expect accommodation only]. In 1877 they purchase the property and in the Sasines record of the purchase, Tom is described as Burgh Officer and in the 1881 census he is Kirkwall's Sheriff Officer. Their oldest son, David (named after David Balfour?) has died, but they have Thomas junior (the "darlingest bairn" of Robert Easton's letter), Barbara, Mary and John Moss Hutchison (two of Elizabeth's sisters were married to Moss men).

Tragically young Tom was killed in December 1890 in a construction accident in New York where he had emigrated. He left a widow and children, one of whom, Maggie Hutchison, came to live with her grandparents in Kirkwall. They ran a grocer's shop in Queen Street and may have continued to take in boarders and lodgers. Elizabeth died in 1903 and Tom in 1907 with his son, John, present. 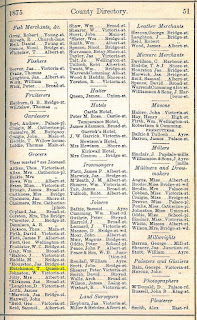 Peace's Almanac 1875
The course of Tom Hutchison's life clearly changed drastically with the loss of his arm and hand on the day of the Prince of Wales' marriage on 10th March 1863. He could no longer go to sea. He and Elizabeth must have feared for their future, but the end up owning a house in Kirkwall and Tom is Kirkwall's Sheriff Officer. Was the Prince of Wales their only benefactor after the accident? It seems likely there was a loyalty between Balfour and Calder and Tom and help came his way after the horrible accident, both perhaps from Balfour and Calder and the friends of Balfour who seek news of Tom in their letters of 1863. It didn't save him from personal tragedy, losing 2 of his 3 sons, but it did keep him from the workhouse.

The Balfour papers are a rich source of information about Orkney and this story is one for the many modern Orcadians connected through many family trees to Tom and Elizabeth. To my amazement I discovered my own connection to them as I researched their story. Nobody in our family remembered the story of Tom's accident until the Balfour papers, box 21, bundle 14, revealed the events of March 1863 and intrigued me into some major research, including establishing the fact that Elizabeth was my great great grand-aunt for my grandmother's mother was her niece.

Posted on behalf of The Balfour Blogger by Dusty