Today is Black Cat awareness day and we enjoy a Folklore Thursday sooooo.... 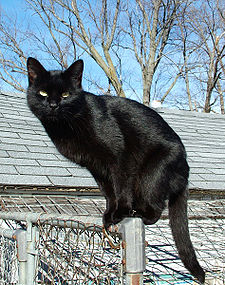 We've written before about a wizard who supposedly shapeshifted into a cat and this idea appears again in the Ernest Walker Marwick papers:

Two young men on the isle of Sanday were taken ill with a very infectious fever. The locals were too afraid of falling ill to tend to them and it was said that Recchel Tulloch brought them food in the guise of a cat.

Unfortunately for Recchel, she broke her leg soon after this and was confined to bed. At this time, a cat had been caught in a rabbit trap on the Backaskaill links!!! It also broke its leg!!! The only conclusion to be reached is that they were one and the same!

The Marwick papers also tell how cats were the Macbeth of the seas... you never mentioned or even alluded to a cat whilst on the ocean as it was a terrible omen. This is why some Shetland boys decided to smuggle a cat on board their father's fishing boat; secreting the poor thing within the sail.

When the material unfurled to reveal the unlucky moggy, their father turned straight back to dry land, ordered a new boat and did not fish  until it was ready.

One of the lovelier Orcadian tales is that of 'Finfolkaheem' - home of the Fin men as told by Walter Traill Dennison:

So black cats can save the day too...

By The Power of my Elf Belt, Begone Small Foes!!

We love the old church minutes, you know we do. There is always much chat about 'fornication' and 'syne' and people being 'compeared' before the church elders to be 'rebuked and chastised.' There is some of that in today's archive, a book of presbytery minutes dating 1639 to 1646.

William Leith the younger and Janet Smith were said to have 'relapsed into adultery' which suggests they had been told off at least once already.

'The brethren think in respect of their obstinance in syne, that there was no way to prevent their falls, except they were put in sundrie yles (isles.)'

'...the forsaid Wm Leyth adulterer should not come in companie heirafter in any place with Janet Smith nor reside in any one yle where she resideth, or shall reside heirafter, under the paine of ANE HUNDRETH POUND.'

To put this into perspective, one hundred pounds was worth about the same in cash today as Fifteen thousand, five hundred and twenty pounds. FIFTEEN THOUSAND POUNDS!! 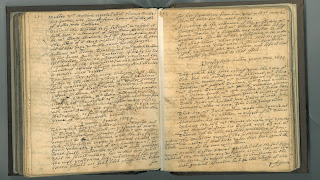 So far, so usual, but we had never read about an 'Elfbelt' which in April 1644 was ordered by the church to be melted down and for the silver to be returned to it's owner. "In respect it had been a monument of superstition"

According to Smith's The Church In Orkney, the belts were silver and 'worn for a protection against the supposed attacks of their imaginary foes, the elfs or fairies.' AMAZING.

We also spent a long time thinking that people were being called 'flanderers' and wondered (and indeed hoped) if this had anything to do with flans. We then realised that it was 'slander' written with a funny, long medieval 's'.

Last week the archive staff had one of our legendary nights out. We chugged cups of tea, slammed  some veggie burgers and nailed a bunch of  homebakes before staggering home way, way, way, past nine o'clock. Say, tennish?


We talked shop, we talked Bake Off, we set the world of carrot cakes to rights (walnuts or no? Discuss...) until, as it invariably does when one is 'partying hard', the conversation ended up at the topic of French knitting.


It turned out every one of us had spent vast swathes of our youth bent over a wooden doll with a tube through her middle and four pins in her head, tongues firmly between our teeth as we 'knitted' great big worms of wool which protruded from the dolly's nether regions and coiled down to the floor. For what and for why we asked ourselves? What was the purpose of this bizarre pursuit? Who needs boxes of woollen worms and what could anyone ever do with such things?


The Orcadian (as usual) came to the rescue:


The next week's issue offered readers the opportunity to make a fabric version of a cat who's just remembered that he's not done something really, really important: