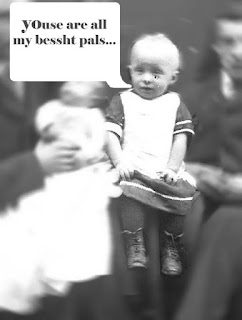 We have written before about Orkney's strong temperance movement and described the central part that alcohol played in a traditional Orkney wedding.


We were also amused recently when we discovered from the 2nd Statistical Account of Scotland that the island of South Ronaldsay had 16 inns in the 1840s, although "seven would be sufficient" according to the disapproving author.


So we knew that Orcadians of yore enjoyed their drink. It was with great horror, however, that we read Reminiscences of an Orkney Parish by John Firth which was published in 1920.


The enquiry which occasioned our perusal of this book was an enquiry about pregnancy in 19th century Orkney. We turned to the chapter entitled 'Birth' which begins:

"It was no uncommon occurrence at an accouchement for the mother and all her attendants to be the worse for drink",

" One does not wonder that the Orcadian of the time possessed an inherent craving for strong drink, for the first thing given to a baby was a spoonful of toddy, and a dose of the same stimulant was believed to be an infallible cure for all his infantile ailments."

This is then followed by a story of 'groggy' midwives laying a baby thought to be stillborn on a cupboard shelf before more sober visitors discover that the baby is just feeling the effects of their mother's imbibing.


We are then told of a  drunken baby falling out of their coverings on the way to their own christening (they have been given some toddy to keep them quiet in the church) and being discovered in a ditch by passers-by who then have to chase the inebriated family members who are still merrily marching up to the kirk with their empty shawl, none the wiser.


As Firth says earlier on in the book:


"the need for some stimulant was much felt by the Orcadian peasant, whose lot forbade him tasting freely even the few pleasures and comforts obtainable in those days"

...and it is later pointed out that home-brewed ale was really the only available substitute for milk during the winter months. Still though... drunk babies.


No wonder these folk were so convinced they were seeing ghosts and witches and elves all the time... they were all just really drunk. All the time.

We have a new selection of pre-produced photographic prints for sale in the Orkney Archive, which cover many different subjects. Some of them are much larger than the usual 8x6 inches in size, so our price of £4 is a real bargain.

[Please note we do not have multiple copies of these items for sale. If you wish to buy a copy of any of these images and the pre-produced ones have been sold, you can still order copies from us at the normal prices. Please see our normal Production Price List below and email archives@orkney.gov.uk to order.]

For all the boat-lovers out there, here are a few with a definite marine theme.

We love this image below of the 1st Destroyer Flotilla illuminated in Kirkwall Bay. This photograph was taken by Tom Kent on the 25th May 1911.

"The moonlight is very welcome these war times, as the authorities can't make one put out the moon as they can the lights in the windows. I went down to see the ships in the Bay and I was told there were more ships coming and going to K'wall at present than comes and goes to the ports of London. It was a lovely sight the ships stretched right across the bay as far as Finstown and were all lighted up making it look like a miniature town."

The above photo is mounted on hardboard, so costs slightly more at £7.

Our usual costs for photographic reprints are: 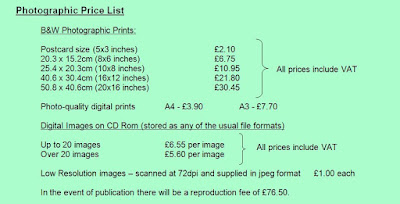 The Photographic Archive holds more than 60,000 images relating to Orkney and its people, with the earliest dating from the nineteenth century.

The images are a priceless record of changes that were occurring throughout the UK as well as in Orkney. They show changes in the working and social lives of the people, changes in farming methods, the effects of two World Wars and the huge influx of military personnel, industries that have largely disappeared and much more.

So pop round to the Orkney Archive during our normal opening hours and have a browse, you never know, your perfect photo could be printed and already waiting for you!
Posted by Dusty at 15:15 1 comment: