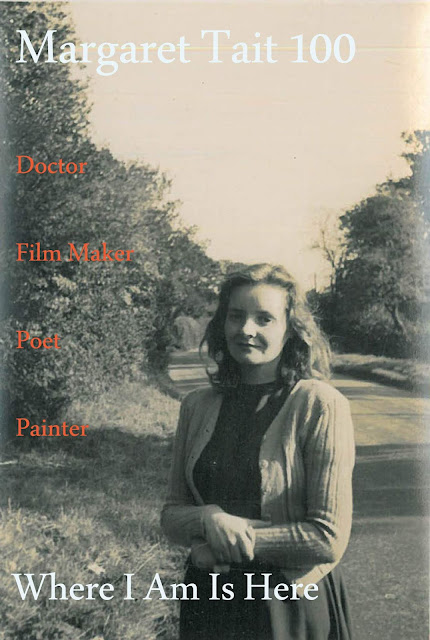 Her family lived in a flat on Broad Street, opposite St Magnus Cathedral and so would have heard the ships honking in the harbour and seen the bunting bedecked streets from their window on that day.

Tait trained as a doctor in Edinburgh after primary schooling in Kirkwall and a secondary education in Edinburgh. She enlisted in 1943 and served with the Royal Army Medical Corps in the UK and the Far East where she began to write short stories.

After some time working as a locum doctor (and writing screenplays) in various parts of Britain, Tait travelled to Perugia in 1950 to research a film. She ended up abandoning the proposed film and instead enrolled at the Centro Sperimentale di Cinematografia film school in Rome for a two year course. This led to the formation of Ancona films with fellow student Peter Hollander.

For the next 46 years, Tait worked under the banner of Ancona films, largely alone and in various Scottish locations, making short films which were partly funded by her continuing work as a locum. Books of poetry were also produced, short stories and a children's book. She made watercolours, wrote a novel and took photographs.

In 1992, Tait finally directed her long gestated feature film Blue Black Permanent at the age of 72.

When she died at the age of 80 in April 1999, her husband Alec gifted several crates worth of letters, photographs, poems, screenplays, paintings, personal diaries, filming diaries, notebooks and personal documents to the library and archive. 48 boxes worth have been catalogued and are available to view.

Several items are currently on loan to GOMA in Glasgow, Summerhall in Edinburgh and Northlight in Stromness, all of whom are currently hosting exhibitions celebrating Margaret Tait's centenary. There is also a small display in the Orkney Room in the Orkney Library & Archive.

If you are unable to visit us in person, then please see below for more images from our exhibit and click here to watch her films. For more information on the Margaret Tait centenary celebrations please click here and here.

Posted by Archiver at 14:43 No comments: