Fearne Kinnear and William Edmonstoune Aytoun were married on Christmas Eve 1863 at St John’s, Princes St, Edinburgh. She was 27 years old: he was 50. Fearne was a niece of David and Eleanor Balfour, of Balfour Castle through her mother Mary, David Balfour's sister. William was a lawyer and poet, Sheriff of Orkney and Shetland. His first wife had died in 1859 and they had had no children.
William then died in 1865, less than 2 years after his marriage to his young bride. Fearne and William had had no children either. She went on to marry Captain James Arthur Forbes, grandson of Sir William Forbes of Monymusk, with whom she had 7 children. She died aged 68, in 1904.

Fearne's mother was a widow - her husband had been James Kinnear and he was a Writer to the Signet, a lawyer. He came from a family of bankers and the Kinnears were wealthly members of the Scottish upper middle classes, as were the Balfours.

The wealth of the Balfours and of the Kinnears is clear in the arrangements for Fearne’s wedding, described by her mother in various correspondence around December 1863. Fearne receives gold jewellery from various relatives and writes to her uncle David to say thank you for such a magnificent present of money.


But the best detail we have about Fearne’s wedding is in her mother’s letter of 18 December 1863. Mary describes her daughter’s trousseau ‘for Eleanor’s behalf’ and over 150 years later, the richness and luxury of that trousseau remain vivid.

‘The wedding dress is of the richest white watered silk, trimmed with Honiton lace…


Queen Victoria had specified English lace for her wedding dress in 1840 and its use in wedding dresses and other special robes e.g. christening gowns, continued for many years. Honiton lace was made in East Devon, by hand – bobbin made lace, of fine threads, created by women working at home, a cottage industry, with Honiton the main collection point for work from the wider geographic area. Factory-made imitation of a lesser quality became available as a result of the demand created by royal patronage but it seems unlikely that Fearne’s wedding dress of gorgeous white silk was trimmed in anything other than hand-made lace, taking up to 5 hours to make every square centimetre.

In 1863 fashion demanded a cage crinoline, dresses draped over a spring steel framework, to create a very full skirt, up to 6 yards in circumference. The framework was amazingly light and created a fashionable shape, without the need for heavy, hot and unhygienic underclothing and padding of previous fashions. It's hard to imagine navigating the world encircled in spring steel and confined by the corset, petticoats, drawers and stockings which fashion and modesty demanded. (Light steel crinolines could lift and reveal all very easily). The width of the church aisle must have been a factor in how a Victorian bride approached the altar.

The marriage of Fearne and William took place in St John’s Episcopal Church, Princes Street, Edinburgh, with Dean Ramsay officiating. The church interior is spectacular with a strikingly lovely plaster ceiling in the nave, inspired by Henry V11’s chapel in Westminster Abbey. Between 1857 and 1861 the most beautiful array of stained glass windows of any Scottish church had been inserted where previously there had been plain glass. Fearne’s uncle Thomas Balfour, had died, aged only 28, in 1838, and he is buried in the cemetery there. The Balfours had strong ties to St John’s and the wealth of the Kirk’s ornament reflects the wealth of its mid-19th Century congregation and contrasts starkly , as does every other aspect of Fearne’s wedding, with the living conditions and expectations of thousands of Edinburgh’s poorer inhabitants.
It’s very likely that Fearne’s wedding day hairstyle was a centre parting, tied into a low chignon at the back of her neck and with loops or ringlets covering her ears. She wore turquoise earrings, necklace and brooch on her wedding day, turquoise being much favoured by Victorian girls with diamonds worn more by older women. And over it all, she wore ’a large and beautiful veil, from head to foot, of Honiton Lace.’


Fearne and William left Edinburgh and ‘set off south’ after the wedding meal, probably by train. Her travelling outfit was a blue camlet dress, embroidered with velvet, a blue camlet cloak and a white bonnet trimmed with lace and fern leaves. Camlet was a fine fabric of wool, probably mohair, and silk – luxurious, warm and beautiful.

For evening wear, she had dinner dresses of peach silk and of blue silk. She visited friends outfitted in violet silk, perhaps wearing her ordinary bonnet of mauve terry or her pale, fawn crepe dress-bonnet with roses and one white feather, with her black velvet pelisse or coat. She received visitors in a gown of corded blue silk. She had another dress of striped, pale lavender and, saving the best for last, one of white alpaca and black lace. It sounds stunning and I hope it looked like this: 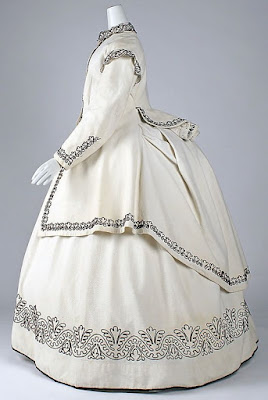 Example
She is dressed in the finest fabrics – silk, mohair, alpaca and velvet. She favours blues, mauves and lavenders which would suit fair hair and a fair complexion, or were these simply the fashionable colours of the day?


High style was easily accessible to the 1860s Victorian lady via magazines with wonderful fashion plates, such as Samuel Beeton’s The Englishwoman’s Domestic Magazine with which he also included paper dress patterns. Fearne Kinnear’s engagement was announced in early December 1863, and she had less than 3 weeks to prepare for her marriage. Both her level in society and the limited time for preparation make it certain that Fearne did not create any of her own outfits. She would have gone to a firm of dressmakers from whom she selected styles and fabrics and who then, quickly, created the beautiful outfits she took with her into her marriage. There is barely a page of the Edinburgh and Leith Post Office Directory for 1862-63 without a listing for a dressmaker, or establishments such as Blythe, Yule & Co (Misses), milliners and dressmakers, 112 George St, Edinburgh.
Her clothes would have been cared for by her servants, or those of the houses and hotels she visited. They would have been brushed and pressed, mended and looked after as befitted their quality and she would have expected them to last, but augmented by each Season’s new fashions and styles.


The Balfour Papers contain no photographs so we don’t know what Fearne looked like. She was however the grand-daughter of George Kinnear and Fearne Gardiner, the woman portrayed in this painting by Sir Henry Raeburn on display in the Scottish National Gallery: a striking woman in her early 30s looking wistfully out beyond us and the artist. Did Fearne look like her?

Fearne’s mother, Mary, had told her brother that she never saw a better prospect of happiness in a union. …. It is completely a love match on both sides and it is a pleasure to see two people so happy! The Balfour papers don’t reveal more (so far) about Fearne and her marriage but she set out into it, beautifully dressed.

Fearne was widowed on 4th August 1865. Prince Albert had died in 1861 and Queen Victoria mourned him deeply for another 40 years – in black. Fearne’s blues and lavenders would have given way in August 1865 to black also and she probably stayed in deep mourning for a year and a day, until 5 August 1866. She would have worn no jewellery and either a black veil or widow’s cap. Second mourning followed, for another year and again her wardrobe was black but her widow’s veil could go and some jet jewellery was permitted. In August 1867 she would have entered the third period of mourning and half mourning when greys and mauves would become her main choices. But on 10 July 1867 Fearne remarried, to Captain James Arthur Forbes. There is no detail, as yet, in the Balfour boxes about her second wedding but the conventions of the day would have made it a subdued affair, with bride and groom mindful of the memory of William Aytoun, her first husband who had died only two years previously.

Posted by Dusty on behalf of the Balfour Blogger.

Archive reference: D2/21/14 - excerpts from a letter dated Decr 18th, 1863 from Mary Kinnear to her brother David Balfour in Shapinsay. Image of dress taken from this website.
Posted by Dusty at 11:23 2 comments: