Some of our Palaeography Group recently discovered a letter in the Walter Traill-Dennison Collection (Reference number D14) which was addressed to a man staying in a tavern in Pudding Lane in London. It was dated 1661, 5 years before the Great Fire of London which destroyed the whole area.

Of course the Palaeography Group excitedly set out to transcribe it to see what it was all about and find out why Orkney captain Peter Winchester was there.

However it has proved to be quite a difficult one to do, with the writer of the letter, Thomas Buchanan, using his own version of Secretary Script the common handwriting style of the day, his own abbreviations (which we have had to guess) and also using the letter "v" where we would use the letter "w". So words like "well", "what", "who", etc are "veil", "vhat" and "vho". You will see that there is no punctuation, so your guess is as good as ours where the sentences begin and end. But there are some funny bits...

So apologies for all the question marks for the words we were not sure of. If you have any suggestions of your own, do please let us know.

Below is the Palaeography Group's transcription of the letter and below that and the image of the original letter is an English translation of our transcription, which shows that phrases like "al relations is veill" actually means "all relations are well".

at the Kings Head Taverne

in Pudding Lane in Fish Street

vard to make up your losses outvard.

I delyvered yours to Mr Frait [Trail?] lykas to Gideon Muray I sall not omitt

the signett be patent vhilk I have intimate & booked and

had extracted the act out of the books off L[e]ith? for our varrand

I have no more to add bot know all relations is veil in ork[ney?]

Moodie is were heer & know that honest [Maurice?]* [fent?] has

bill on [hundreth/inn[te]rest?] & the rest heer in [muny?] as at meeting you war

heeroff comitting yow to the almightie I ewer rest and am

yours att Comand to serv[e] yow

3. DSL has looser in under loser meaning one who has made a financial loss https://dsl.ac.uk/entry/dost/looser

6. Gairsay, Eglisha (Egilsay) and Munt Hooly (Mount Hoolie) were people who were referred to by the property they owned. 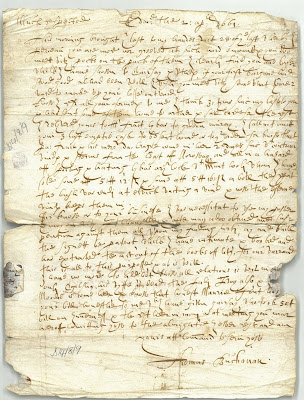 This morning brought your last [letter] to my hands dated 28 of the last [month] whereby I perceive you are more nor grieved at such amounts you do meet with pocks on the pack of them I clearly find you a loser which I have shown to Gairsay and others if your first bargain had stood good all have been well I wish you meet with somewhat homeward to make up your losses outward.

Know I received all your forms to me I think 3 times since my last [letter] to you & had send some of them home to Arthur & shall [---?] for the rest I delivered yours to Mr Frait/Trail? like as to Gideon Murray I shall not omit your 3 last empty casks to be send home or to your order for know that James Trail & his merchant David Craigie were in here 2 days since with contrary winds & storms from the coast off Norway and all in a hazard at spoiling & heating like as Arthur Cock with Mount Hooly when I have sold some at £5 12 shillings & some at £5 16 shillings a boll they export The Bush was ready at Elwick waiting a wind & now the eastern winds keep them in.

Sir know as to your business it was necessary to use my power & my [---?] with [--?] Chancellor & after may also obtain a suspension against them all whereupon my finding such [--?] and while the signet be patent which I have intimated & booked and had extracted the act out of the books of Leith for our warrant this is all to this purpose & all is well I have no more to add but know all relations is well in Orkney only Egilsay’s wife is dead the Lady Hoy also & I [tear in page] Moodie were here & know that honest [Maurice?] has [sent?] your bill honestlie to me which I have given Gairsay who took £50 bill on one hundredth interest & the rest here in money as at meeting you were hereof committing you to the almighty I ever rest and am yours at command to serve you

Another interesting fact we discovered while researching the Pudding Lane area is that it is in the parish of St Magnus the Martyr in London. So we wondered whether it was a particular haunt of Orkney travellers.

Document Reference: D14/8/9 Letter 2nd April 1661 TB to PW
********Update*******************
We've had a fascinating update to our Puddling Lane letter. The Parish Clerk from St Magnus the Martyr Church sent us this photo from 1979, with the Great Fire memorial in the background.
He said, "The Kings Head Tavern was a well-known hostelry in St Magnus parish dating from the 15th century, which was famous for its wine.  It was situated in Kings Head Court between Fish Street Hill (New Fish Street) and Pudding Lane.  An Elizabethan ballad mentions the “Kings Head in New Fish Street where roysters do range." The King's Head had an unrivalled position close to the northern edge of old London Bridge and to the stairs at Billingsgate and Old Swan either side of the bridge, where one would have caught a boat to go down or up river.
Kings Head Court (with red car) can be seen on the far left side of the photo below, taken from the east side of Pudding Lane in 1979 (with the Monument in the background). At that time the area was still mainly occupied by fish and fruit merchants, but the sire was redeveloped again as offices following the closure of old Billingsgate Market in January 1982. Unfortunately Kings Head Court disappeared at that time."
"The Kings Head Tavern was next door to the baker’s house in Pudding Lane where the Great Fire started, but was rebuilt after the fire and survived until shortly after 1900 (when the City Corporation widened the stretch of Lower Thames Street between Fish Street Hill and Botolph Lane and the area was redeveloped).  In Victorian directories the Kings Head is listed at 5 Kings Head Court or 12 Pudding Lane."

Although Pandemic restrictions are easing, staff in the Orkney Archive are still wiping all surfaces used, such as tables and chairs, with warm soapy water and drying with paper towel. 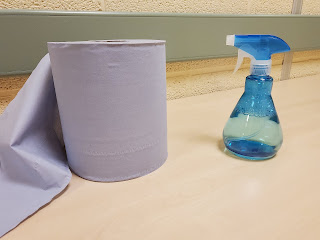 We are still washing our hands many times throughout the day and asking visitors to do the same. 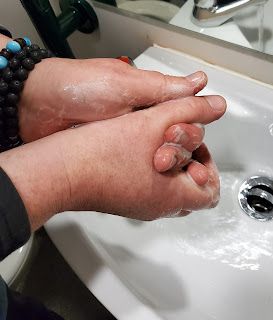 We are still wearing masks or face coverings when moving around the building. 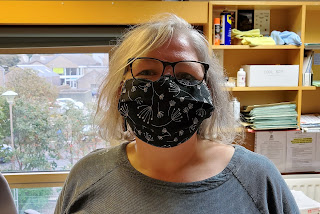 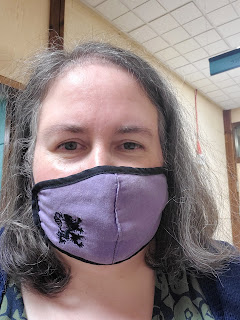 All to keep staff and visitors safe.