One wild place in Orkney is the island of Swona.


Swona is an island situated in the Pentland Firth, south of Orkney and to the West of South Ronaldsay. It is often confused with Stroma which is further South and therefore seen as part of Caithness. 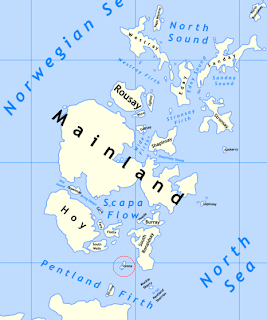 This island has been uninhabited since 1974 when batchelor Jim Rosie left and there were only ever about 8 houses on the island. Its position in the Pentland Firth means that it is not easily accessible and therefore it is rarely visited.

People who have made the trip have returned with descriptions of houses left as if the occupants had meant to return moments later. Pictures are still on the walls and the tables are set for tea. 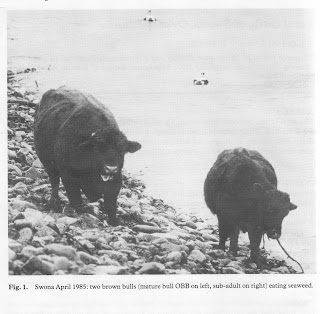 The only inhabitants are a herd of beef cattle which are now feral and have become a seperate species. Apparently, these cattle forage for seaweed and move around the island in one unit like a scary cow gang. As somone who is already scared of cows, I have made a mental note to never visit this island.


As for wild men and women, the amphibious, shape-shifting Finfolk were said to live in Finfolkaheem, described variously as either a vanishing island, a city at the bottom of the sea, or perhaps the island of Eynhallow.

Finfolkaheem story taken from Walter Traill Dennison's Orkney Folklore and Traditions and information on Fin Folk taken from The Folklore of Orkney and Shetland by Ernest W. Marwick.
Posted by Archiver at 12:07 1 comment:

A Stack in Time

Our Palaeography Group is now heading towards its 20th week. We have enjoyed finding out about life in the 17th century from all the documents we have read and transcribed. One in particular stands out in our minds as being a bit unusual. An unlucky Kirkwall resident got more than he bargained for when he tried to bend the rules involving peat stacks. Peat is used as a fuel on Orkney instead of wood.

﻿
It was written in 1686 and is a Supplication by Magnus Moir, a prisoner in the Tolbooth, to the Magistrates of Kirkwall asking for liberty from his confinement for stealing peats.

﻿﻿But from Mr Moir's explanation below you find that he didn't exactly steal peat:
"Unto the much honoured Lord provost ballies and counsell of the brugh (burgh) house of Kirkwall

﻿﻿Sheweth
﻿
That whair it hath been your ho[nour]s pleasure to incarserat me within your tolbuith (prison) of Kirkwall for my contemning (despising) your authorities in building up of peats upon my stack standing upon the... pier grounds of that pairt of the toune of Kirkwall called the brugh (burgh)

Though before I presume to attempt any such thing either in building peats or utherwayes I demanded libertie from my Lord Dean of Guild and tuo of the present magistrates who gave me libertie for that effect:

﻿﻿And sieng (seeing) it hath been your pleasure not only to impose upon me ane fyne for so doeing But also to punish my person by imprisonment now be the space of tuelve dayes bygone wherethrough I have sustained seickness in my old infirme persone and loss in my household affairs.
﻿


I being most willing for my liberation to find good and suffitient cautione actit in your ho[nour]s toune court book not onlie to re-enter to persone againe when ye shall appoynt But also to be lyable in payment and satisfactione of what soumes (sums) your ho[nour]s shall think fitt to impos upon me for my presumptowows (presumptuous) contemning (despising) your auth[orties] in maner foresaid And for all uther causes and esceaps I shall be found guiltie off in tyme by gone and your ho[nour]s answer is humblie beggit and craved with your best convenience by your supplicants poor petitioner who shall ever pray.

Kirkwall the seventeen day of Nov[embe]r 1686

The magistrates and counsell haveing taken [the] thereafter written supplicatione to their consideration they ordanes him to pay this day to the thesaurer (treasurer) of the brugh (burgh) tuentie pounds Scotts money."

It must have been a very large stack of peats to hollow out for a cow for a couple of nights. But then a stack built on the pier could have been made up of tax paid in kind by the tenants of Orkney to the magistrates of Kirkwall and used to fuel the fires of the residents of Kirkwall.

In the Kirkwall Town Council minutes of 19th January 1687 is the following statement:

So Magnus Moir paid his fine 3 days later, and presumably gained his release from the Tolbooth (prison).

It is great to be able to decipher this old faded document and share it with a new audience. Let us know what you think in the comments below.