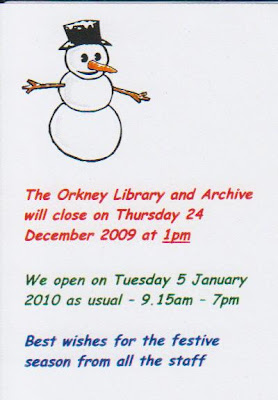 Posted by Archiver at 10:45 No comments:

Christmas do, come on and do the conga... 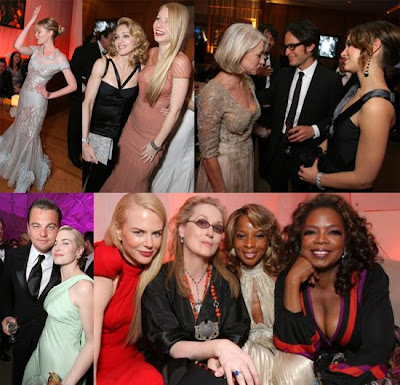 Here you go. As promised, photos from our Friday night shindig. I think you'll agree that it was a glitzy, sophisticated and surprisingly star-studded event. Leo brought some lovely home-made mince pies and Oprah was a right laugh.

Posted by Archiver at 11:56 No comments: 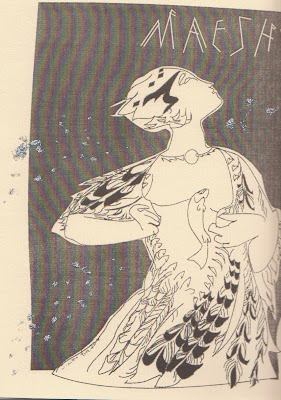 Today is the shortest day of the year and, under this heavy grey sky, it certainly feels like it. We've had our first big snowfall of the winter and the few people outside are either scurrying past in swathes of wool and Berghaus or shovelling snow and spreading salt in reflective jackets.

A lucky group of people will be spending sunset (which will occur at 3.15pm according to The Orcadian website) in Maeshowe, Stenness.

This Neolithic tomb, consisting of entrance passage and mound-like burial chamber, is thought to date back to around 3000BC. On the shortest days of the year, the final rays of the setting sun spread down the entrance passage and project a golden door shape onto the back wall of the chamber. The event can be seen on this live web-feed: http://www.maeshowe.co.uk/.

Pictured is the illustration accompanying our signed copy of George Mackay Brown's beautiful poem Maeshowe Winter. The page is decorated with silver glitter and the words lighten up this short dark little day.

'Children sing under a street lamp, their voices like leaves of light.'
Posted by Archiver at 09:49 No comments:

Christ-mas do do do, push pineapple, shake a tree...

It's the Library and Archive festive drinks tonight.

Yes. Tonight we shall drink, dance and be merry. Booze shall be downed, congas will be led and morals shall be cast loosely aside as we spill wine, straddle photocopiers and make inappropriate passes at each other. Our office party will make Sodom and Gomorrah look like an episode of Sesame Street.

Photographs of the debauchery* will be posted on Monday.

*Which, of course, will actually be photos of a perfectly pleasant, civilised and tastefully lit soiree ending no later than 7pm. Don't worry tax payers!
Posted by Archiver at 16:02 No comments: 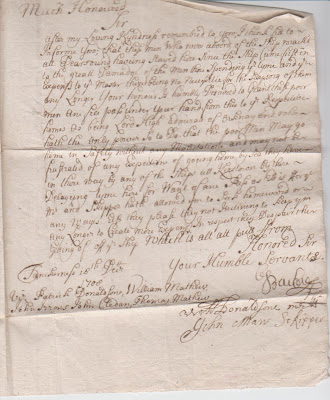 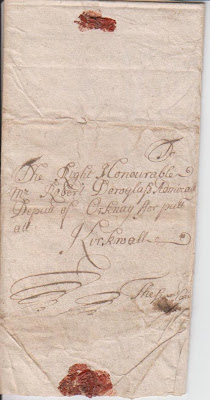 Most of the recent posts have been 20th century in nature.

Pictured is a letter written on the 18th of December 1708 to Robert Douglas, Admiral Depute of Orkney.

A ship had been wrecked at Deersound and the crew were stranded. This letter was written by the skipper of the ship, John Maw, who required free passes for his men so that 'the poor men may go home in safety without any Molestation.'

Despite being 300 years old, the letter is in good condition and is clear and easy to read. It is part of the Joseph Storer Clouston collection of papers.

Posted by Archiver at 09:59 No comments:

Apparently, Orkney is to expect 'heavy snow showers' over the weekend. This is quite unusual as snow usually hits here in February or March.

The snow also seems set to continue up until Christmas. This is lovely for folk staying put but not so great for those hoping to fly/sail/drive South next week.

It's a great excuse for another delightful snowy pic from the photographic archive at any rate. This week it is a Tom Kent image of Willow Road, Kirkwall. 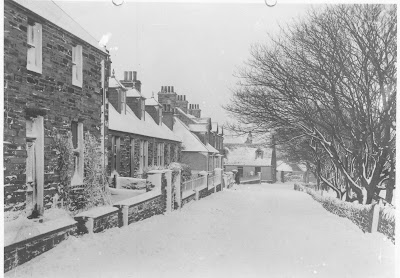 Posted by Archiver at 09:55 No comments:

Wow, these Rinso ads really go for the jugular. The moral of these two narratives is basically 'use our product, or your husband will leave you.'

Click on the images below and swoon in politically-correct outrage... 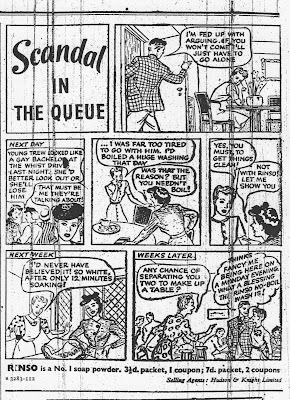 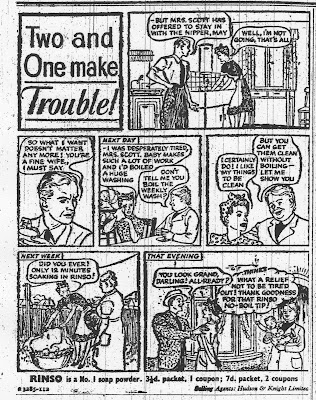 Posted by Archiver at 12:22 No comments:

Email ThisBlogThis!Share to TwitterShare to FacebookShare to Pinterest
Labels: 'A fine wife I must say...', Old adverts, Rinso, The Orcadian, The Wonderful World of 1940s Adverts

Wuthering Heights at the archive

We may roll our eyes at some of the names people dream up for their children these days, each more ludicrous than the next. I, however, welcome women called Heaven-Leigh naming their son Suzuki, or fathers known as Terminator christening their baby girls Kahlua. In years to come, their family trees will be so easy to compile! Different names for each generation, some of them datable to a five-year period of a certain decade of pop culture. Simple!

I am currently wading through a family tree where nearly every woman is named Catherine and all the men seem to be called Peter or James. One Peter, the son of Peter and Catherine, has married a girl who is not only named Catherine, but has the same maiden name as his mother! His brother married a Catherine too. Then called his daughter Catherine. And his sons Peter and James.

They keep swapping houses too!
Posted by Archiver at 10:56 No comments: 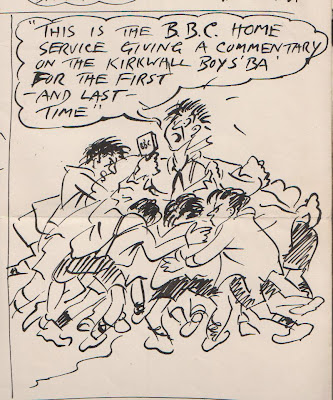 This 'Spike' cartoon, first published in the Orkney Herald newspaper has been chosen for the front of our Orkney Library and Archive Christmas Card 2009.
The Ba' is a form of mass hand-ball played throughout the streets of Kirkwall every Christmas and New Year's Day. Hundreds of men could be involved at each game.
The inhabitants of Kirkwall are divided into 'Uppies' and 'Doonies' ('Up-the-gates' and 'Down-the Gates'), teams which are determined by birth or their first entry to Kirkwall. As most children in Orkney are now born in Balfour hospital in Uppie territory (or in Aberdeen meaning a re-entry to Kirkwall from the airport via Palace Road ), Doonie fathers have been known to drive their new-born babes home in a widely circuitous route to ensure their allegiance.
The general idea is for the teams to get the ba' to their own 'goals'. These are designated places in the town. The Uppies are aiming for a wall situated at the meeting of Junction Road, Main Street and New Scapa Road and the Doonies want to immerse the ba' in water along the Harbour front. The players can use pretty much any means necessary and the game is typically long and rough. Open play is unusual and the ba' moves along the streets in the heart of a writhing, sweaty scrum for most of the day. It is not uncommon to see steam rising from the huddle of players as their body heat meets the cold winter air.
There is a boys' ba' played in the morning and a men's ba' which kicks off at 1 0'clock. This means that there can be two games going on at the same time, making the streets of Kirkwall a hazardous place to walk.
A woman's ba' was played on Christmas day 1945 and New Year's Day 1946 and women have been known to take part over the years. The vast majority of players, however, are men and boys.
Information taken from 'The Kirkwall Ba'' by John D M Robertson.

Posted by Archiver at 11:05 No comments:

Ever get the feeling you're missing something? 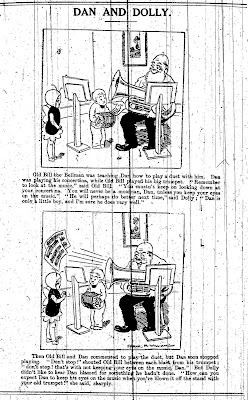 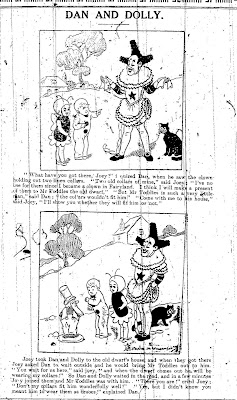 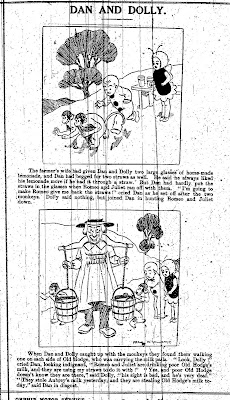 Today we found this 'comic' strip entitled "Dan and Dolly" in 1924 editions of the Orkney Herald.
The pictures are bewildering enough but the po-faced text sheds no light upon the intention of these narratives. To instruct? Caution? Amuse?
Click on the images to view the tales and decide for yourselves.
Posted by Archiver at 16:24 No comments:

We are the walking wounded in the Archive today. Yesterday's humphings and stackings have taken their toll and there is many a bruise to be seen. Muscles are stiff and shoulders are bowed.

The work of an archivist or a librarian is a fairly physical one. One may think that the signing of a deposit form or the stamping of a book is as manual as it gets but au contraire mes amis, it is a work out for the arms! Carrying boxes to and fro, stacking shelves, moving furniture, assembling shelving... it is my perfect gym; full of books and not a sweaty towel in sight.
Posted by Archiver at 10:32 No comments: 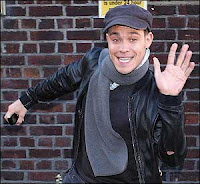 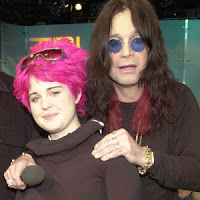 Like Bowie, Will Young and Ozzy with Kelly we have been going through some changes today in the archive.
Desks are being replaced (good), heavy boxes are being moved back to almost the exact location we moved them from nine months ago (boo) and new shelf units have arrived (hurray! Nothing is more exciting in an archive than extra shelf space.)

We are all trying to forget the fact that the boxes will be moved back again in about six months time and the new shelves will be heaving with books and papers before we know it...

Posted by Archiver at 13:08 No comments:

Ta-daa! - Frox and Claize it is 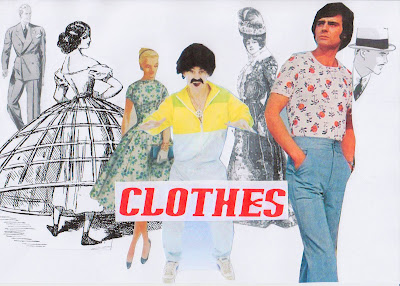 Our new exhibition includes photographs and archives which mention or focus upon clothing throughout the ages. From crinolines to the New Look to 70s knitwear and shell-suits, the history of what people wore in Orkney is illustrated.

Archives used include a transcription of an order of clothes made by Patrick 'Black Patie' Stewart in 1603, clothing accounts for the North Lowland Fencibles as administered by Colonel Balfour from 1797 - 1807 and a small notebook of knitting patterns written by a young girl from Brims, Longhope in the 1800s.
Posted by Archiver at 09:46 No comments: 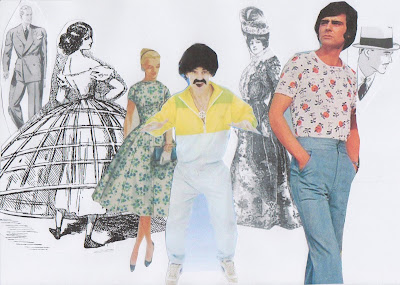 Above is a work-in-progress poster for our latest exhibition. Can anyone guess what the theme will be? The right guess will win you a quality street and two sheets of free photocopying. Don't all type at once. (And you'll have to come in person for your prize.)

Posted by Archiver at 14:05 No comments:

Deck the halls with tat and fibre-optics 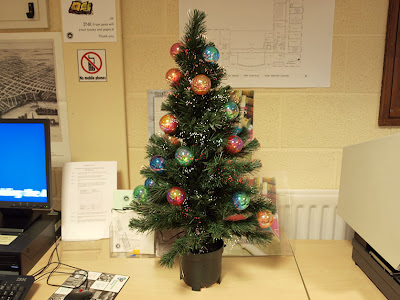 Wowsers! It's Christmas decoration time and, as you can see, we've gone all out. Unfortunately, our digital camera does not take videos so you cannot witness the wonder of our ever-changing fibre optic tree, nor our 8-setting twinkling fairy lights which now festoon the Orkney Room journals. 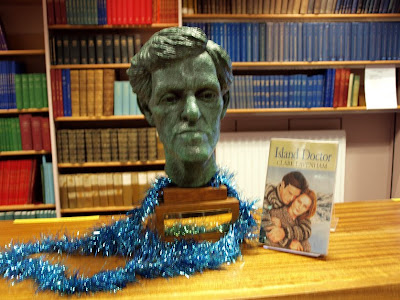 Do you find this out-of-focus image of a betinselled George Mackay Brown with rom-lit Island Doctor an offensive travesty upon travesties or an eclectic post-modern delight? Are you boredly indifferent? Simply record your view in our newly glitzy comments book (see below.) Or alternatively, leave an outraged/fawning comment on the blog. We have had two puzzled reactions already. 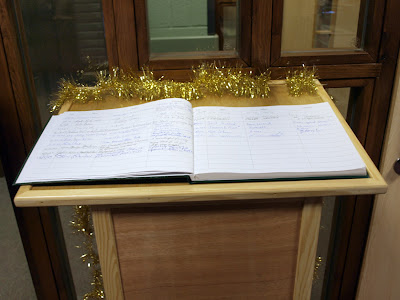 Posted by Archiver at 12:53 No comments: 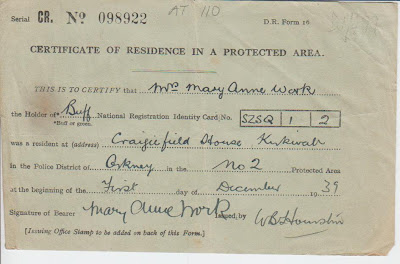 It is so cold today that heaters are ablaze and members of staff are swaddled in scarves. At least we are safe and can move about freely unlike the residents of 1939 Kirkwall.

And it is time to put up the Christmas decorations...

Posted by Archiver at 13:47 No comments: