For anti-slavery day we took a look through the catalogue to find the few mentions we remembered about Orcadian gentry who were either slave-owners in Jamaica or who made money from the slavery trade.

We found a court case from 1826 between David Erskine of Kirkwall and James Makewell, a former slave.

Erskine was claiming breach of contract against Makewell who, as he put it, 'had belonged' to his brother, Dr Robert Erskine of London who was referred to as Makewell's 'master'. Dr Erskine had visited his brother in Orkney, leaving Makewell behind when he returned home.

David Erskine claimed that he had fed and clothed Makewell and sent him to school whilst waiting for his brother to send for his servant. When no word came, he alleged to have offered Makewell employment at the rate of £3 per year, half of which he said was paid upfront.

Makewell was then apparently 'induced' by John Traill Urquhart of Elsness, to join him as his servant in Sanday despite Urquhart being previously warned off by Erskine. 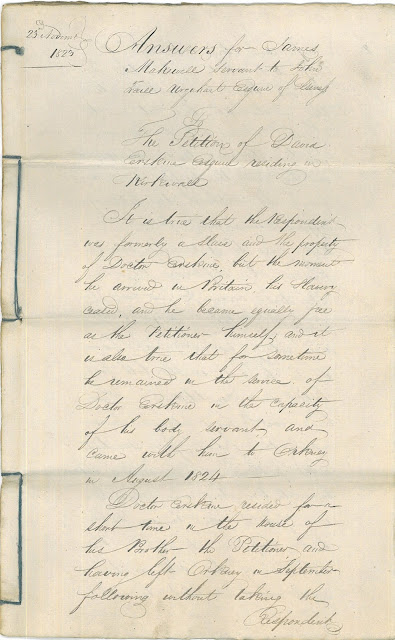 This version of events was roundly disputed by Makewell who averred that 'the moment he arrived in Britain, his slavery ceased, and he became equally free as the petitioner himself.'

He agreed that he had been left behind in Orkney by his former employer, but not that he had been treated well nor truly engaged in formal employment by his Kirkwall host. He described being fed but not clothed, ending up in nothing but rags, whilst being forced to work as a farm labourer, something which he had no training for.

His version of the events had him deciding that he had been patiently uncomfortable for long enough and that he had to do 'something for himself' which led to employment as Urquhart's servant.

He rejected the idea that he had been paid £11/2 as a retainer for the rest of the year and claimed that he had been handed 10 shillings for clothes towards the end of his stay with Erskine and a further 20 shillings before he left. This, he said, was remuneration for all the work he had done thus far rather than a new wage. 'The alleged engagement was altogether imaginary' in his opinion. 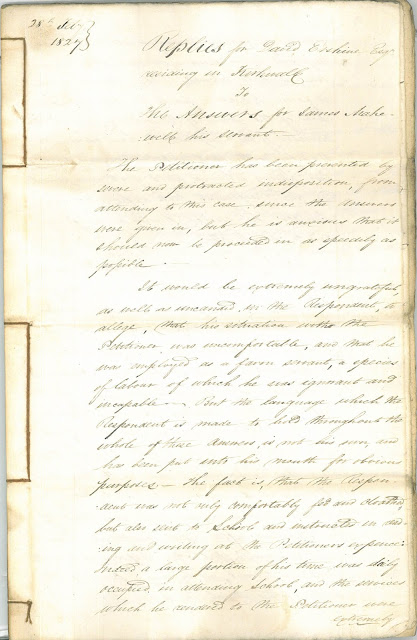 David Erskine hit back at this representation, calling it 'ungrateful' and 'uncandid'. He reiterated that he had put Makewell through school which apparently took up much of his time and called the idea that he had made Makewell work as a labourer 'absurd' as he did not have a farm, merely a 'park' which Makewell had 'taken a fancy' to ploughing one day.

Unfortunately, our Sheriff Court papersdo not record the outcome of this case, but the last item in the bundle states that the Sheriff Substitute 'allows the petitioner [David Erskine] a proof of his averment of the engagement under which he claims the respondent's [James Makewell's] services and for that effect grants diligence against witnesses to be reported the day of...[left blank].

I'm not sure if this means that the Sheriff Substitute was ruling in Erskine's behalf or whether he was merely giving him more time to prove that he had engaged Makewell in his employ.

Can any lawyers help??

(Some lawyers did help... see the comments section below...)