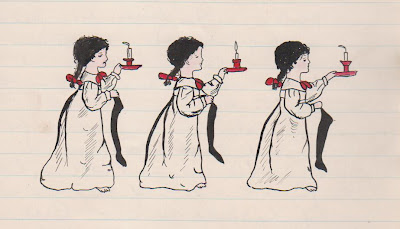 The Orkney Library & Archive
will be closed from
3pm on Friday 24 December 2010
We open again on
Wednesday 5 January 2011
9.15am – 7pm
Best wishes for the festive season from all the staff

Posted by Archiver at 09:00 No comments:

Click to enlarge if you dare.
Posted by Archiver at 16:42 2 comments:

We Are Closed Today

We do apologize for any inconvenience that this may cause you.
Posted by Archiver at 08:33 No comments:

The Only Time Today That It Has Stopped Snowing... 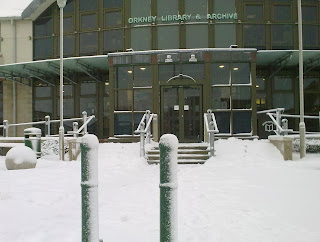 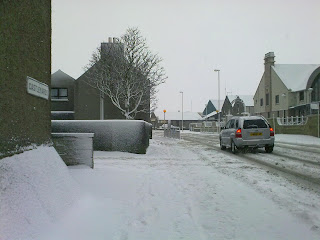 Posted by Archiver at 15:01 No comments:

Stromness library is closed today and tomorrow as every single member of staff there is stranded in some way!

Again, we are sorry for any inconvenience that this may cause.
Posted by Archiver at 11:40 No comments:

The library is open today but the staff are a little depleted due to the weather. Us town folk must admit that the thought of leaving our warm beds to trudge through the snow was difficult, but we are not only dashing, adventurous types who laugh in the face of ice and snow, we are far too dedicated to you, dear customers, and so we are here; a little creased and rosy-cheeked but eager to serve.

The Bookbug Rhyme time session has been postponed until Wednesday morning and the mobile library van shall not be in Burray and South Ronaldsay today.

Also, the library and archive shall be closed tomorrow, Saturday the 18th.

We apologize for any inconvenience that this may cause.
Posted by Archiver at 10:33 No comments:

From Us To You Dear Readers... 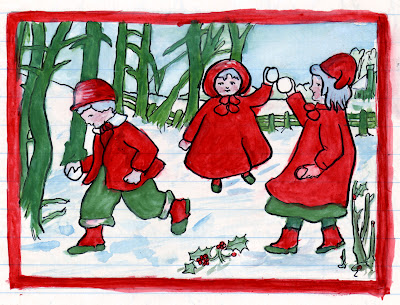 Above is the archive image which has been chosen to adorn our Library and Archive Christmas Card this year. It is taken from a school jotter filled with stories, pictures and poems which were divided into editions of a magazine called 'The Star'. The book is part of the Mary Robertson Sinclair Papers, reference D30/2/10.
The cards themselves are even fancier as Karen and Steven spent hours titivating them with glitter glue before sending them on their way.
Posted by Archiver at 13:20 No comments:

The student fees vote is the biggest story this morning and looks to be a hot topic for some time to come. Below are some images relating to  probably the biggest protest to take place in Orkney.

In the late 1970s, exploratory surveys of uranium-rich land just north of Stromness were planned, to great public opposition. The Orcadian protests were much more subdued than those seen in London yesterday. Around four hundred people turned up on Broad Street for a silent protest and many children were present. 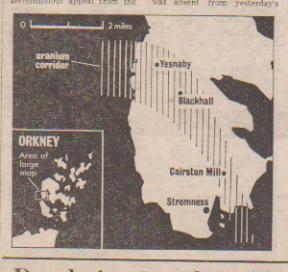 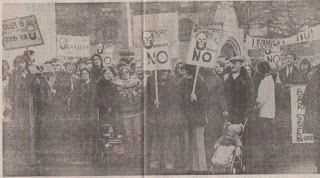 Images taken from the Press & Journal dated 9th of February 1977 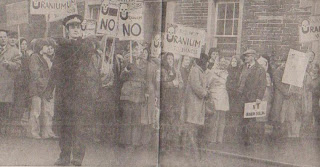 The government ministers involved tried appearing on a festive Strictly Come Dancing special to win folk over but the population were moved by neither sequins nor prowess with a flippy little cape and the plans for drilling were dropped.

We Are Never Happy...

The snow does seem to be thawing in Kirkwall, but this has only served to reveal the treacherous layer of trampled ice that was lurking beneath the crunchy, powdery snow which was easier to walk on.

Perhaps you are all feeling a little nostalgic for the irritating, yet safer fluffy snow of earlier in the week? Perhaps not.. 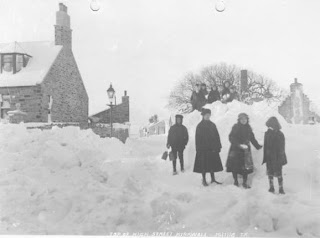 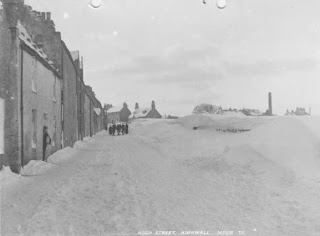 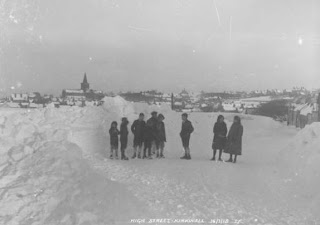 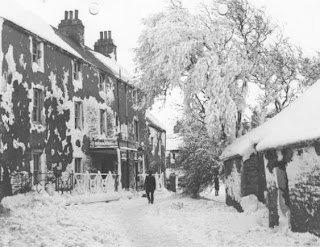 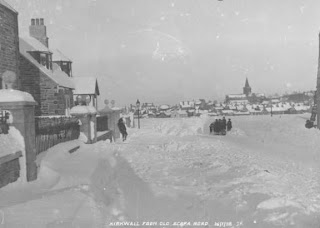 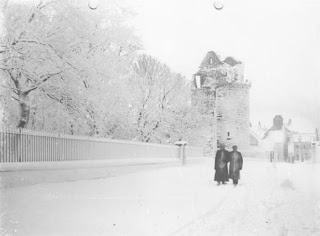 Palace Road, undated
These photos were all taken by Tom Kent and therefore the undated ones must predate 1936.﻿
Posted by Archiver at 12:53 1 comment: 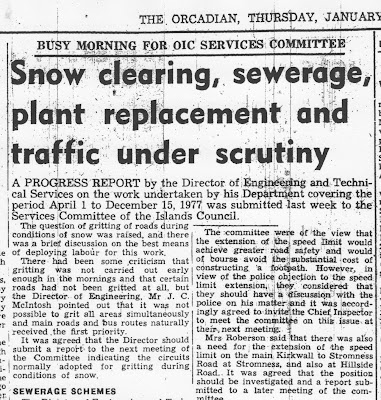 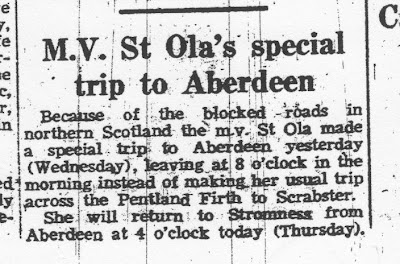 All of these snippets are taken from editions of The Orcadian dated January 1978. So far, so familiar, but things were about to get worse...

Nearly all of the West Mainland and Island schools seem to have been closed for an extended period, roads in Orphir were completely blocked and impassable, the water went off in Stromness, Evie, Rendall, Sandwick and Orphir and there were milk shortages due to farmers being without water, electricity and transport. Milk was being dumped at some farms.

Mr Alastair Whyte, manager of the Kirkwall Claymore milk factory said: " I have never known so much chaos in my time."

Worst of all, there was no telly for a significant proportion of the population! The Radio was working, however, and Radio Orkney was on air for three hours one night keeping the population up to date with developments and boosting morale with music and phone-ins.

The worst Orkney power cut story I have ever heard was recounted in the staff room one day. It must have been around about 1983 when the power cut out across most of the mainland. I know this, because this is when the fabulous guilty pleasure of a mini-series The Thorn Birds was shown. The power cut happened IN THE MIDDLE OF THE LAST EPISODE.

In these new-fangled days of iplayer, youtube and dvd box sets, this would be, at worst, a minor irritant but in the early 1980s such an event was truly desperate. Fans of the charming yet ambitious Father Ralph de Bricassart  were reduced to roaming the streets, tearing their hair out and shouting "Does anyone have power? Will Ralph ever find out that Dane is his illegitimate son?!!"

Some people still tear up when it is mentioned and it is fun to prank call Orkney numbers and whisper "her dress was ashes of roses..." until the recipient of the call dissolves into confused and helpless sobs. 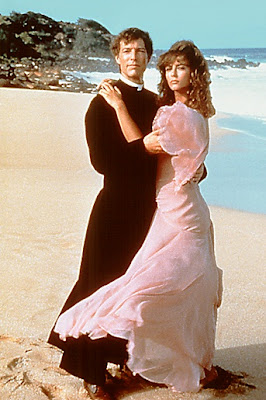 Posted by Archiver at 15:43 No comments:

Shopping In A Winter Wonderland... 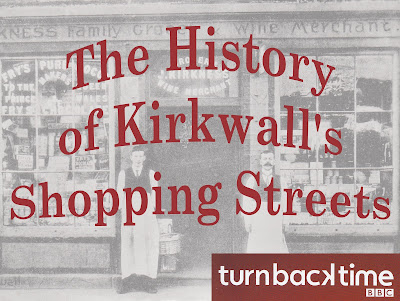 We have been so caught up in the snowy madness of late that we forgot to post about our new exhibition which explores the history of Kirkwall's shopping streets. The display was inspired by the BBC program Turn Back Time﻿ and includes photographs, plans and archival documents relating to retail in Kirkwall throughout the centuries.
You can view photocopies of the original documents on the wavy wall of the library next to the computer room, but the real stuff is upstairs in the archive search room in our display cabinet.
As usual, the photographs have proved controversial, and our captions for some of the shop fronts have been roundly derided by folk who can apparently remember back to the early 1900s. Come in and have a look! Challenge our assertion that photograph L1067/1 shows the former location of Drever and Heddle's! Scoff at our dating of our interior of James Flett and son's to 1980! Roll on the ground with tears in your eyes at the idea that Kirkwall ever had a ladies' pants shop that stayed open long enough for a photograph to be taken!
This image of Sclater's menswear seems the most appropriate image from the exhibition to post. Look what a laugh they are all having. Here in the archives we prefer to complain endlessly about the snow, shaking our heads ruefully at the various official decisions which have been made and detailing exactly how we would have organised things ourselves. Much more fun. 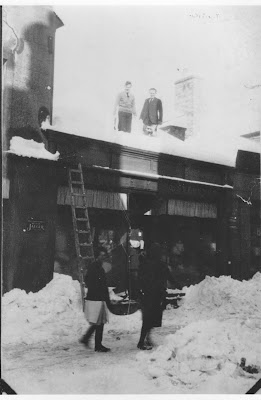 The library is open today and staff were out first thing shovelling paths of snow up to the entrance. Do watch your step on the North side of the building though , as it is quite slippy there.
Posted by Archiver at 11:31 No comments: 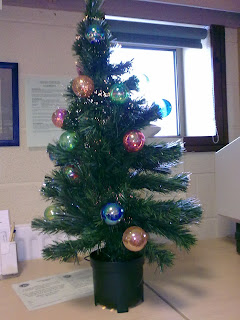 Now that the library Christmas tree has arrived and Steven's fab advent calender has been unveiled (see our twitter page for each day's hand-crafted-by-staff door countdown) we have decided that it is time to festoon the normally staid archive with inappropriate glitter and twinkliness. 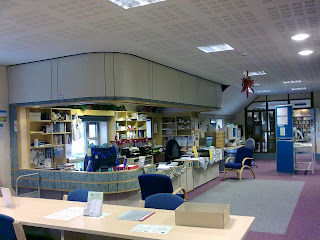 It does look better in real life, honest.

The flashing fairy lights may irritate Orkney Room readers and the tinsel on our computers does somewhat obscure our views of the screens but surely constant, low-level irritation is as much a Christmas tradition as Cliff Richard and Walford punch-ups? 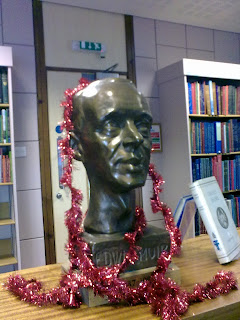 Edwin never minds, he thinks it's just a bit of fun. 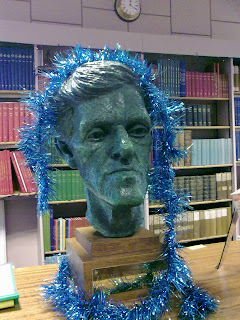 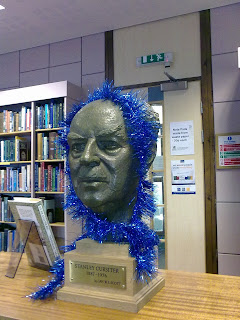 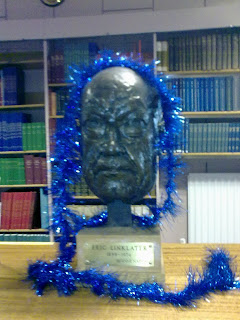 Eric is always absolutely furious. We just bung it on his head and then run away from those angry, angry eyes.
Posted by Archiver at 12:50 3 comments: