Oh, what a night

Things got a bit breezy on Thursday night, and not just for us in Orkney but, it seems, for most of the country. You'll be happy to know, reader, that your favourite archive has not suffered any damage and that our water sooking up pillows did not have to be deployed.

We're used to a bit of wind in Orkney (yes, I know there's a joke there but I'm going to ignore it on the grounds of good taste) but sometimes, even here, we're not quite prepared for its severity. 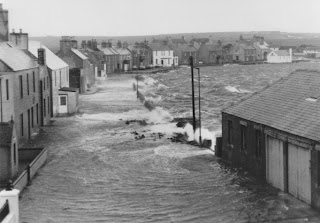 Here's a photograph of Whitehall village on the island of Stronsay﻿ during a combination of high tide and gales. I'm not sure about the date but it looks fairly recent.

The worst weather, or at least the weather with the worst consequences, was encountered in 1952 and 1953 and is still spoken about today, and made headlines around the world. On both occasions hurricane force winds battered the islands and caused untold damage. In the storm of 1952 over 1000 domestic and 2000 agricultural buildings were wrecked or severely damaged. And then almost exactly a year later it all happened again! 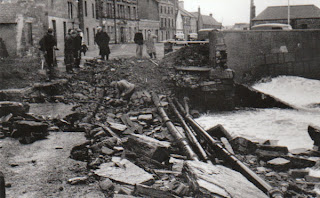 This photograph shows some of the damage caused to Shore Street in Kirkwall. Hundreds of metres of the road along the front were washed away by the force of the waves.

All we need is snow now and I can tell you all about the blizzards of 1955 when people in the West Mainland had to have supplies delivered by lifeboat!

We've made The Times!! (other national newspapers are available) 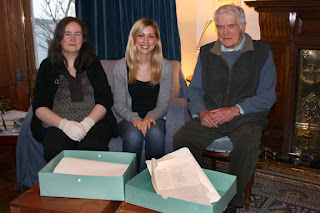 The Times Newspaper features an article today about Orkney Archive receiving the first batch of papers of George Mackay Brown on permanent loan. We're very excited about this acquisition and are very grateful to Archie and Elizabeth Bevan for agreeing that it is important to keep the papers of such a famous and revered writer in Orkney.

The twenty one boxes contain manuscripts, short stories, plays and more, including some rarer or unpublished works. The initial cataloguing of the papers has been carried out by University of Glasgow Postgraduate research student in Scottish Literature Linden Bicket (seen in the centre of the photograph, with Assistant Archivist Lucy and Archie Bevan) who was awarded a British Academy Small Grant to carry out the work.

We will soon make a list of the collection available on our web page. Linden has flown south for the winter but will return in April 2012 to resume cataloguing of the next batch.
Posted by The Fonds at 10:20 1 comment: