Weird punishments of the week, part 2

Following our recent post about a weird punishment we've found another in the book Curious incidents from the ancient records of Kirkwall by W.R. Mackintosh. 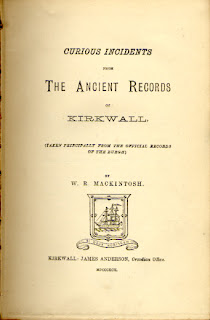 Walter Beaumond, boatman, was charged on 6 May 1732 with having stolen a sheep from Quanterness Farm. His explanation was that he had come across a dead sheep so had skinned it and took the skin home "in his cassie". Having been found guilty the sentence passed was that Walter should go from the prison to the Rampart with the sheepskin fastened to his shoulders, where he was to stand for a quarter of an hour.

This didn't seem a terribly harsh punishment but, reading on, we discover that seven days later the Beaumond family were ordered to remove themselves and all their goods and gear from the Burgh "never to be seen there again". The hangman was given the sheepskin.
Posted by The Fonds at 11:48 2 comments: 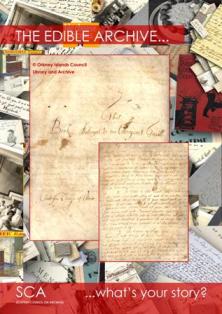 It's that time of year again when we all put back on any weight that we've managed to lose since Christmas by consuming large amounts of syrupy pancakes. "No!", I hear you cry, "I cannot because I don't know how to make pancakes". Well worry no more because you can find a lovely recipe for Orkney pancakes on the Scottish Council on Archives notice board at http://www.scottisharchives.org.uk/ediblearchive/cards/orkney-pancakes-recipe-card.pdf

The recipe is taken from an early 18th century cookery book in D14/7/1: Traill-Dennison papers. A note on the cover states that it belonged to Margaret Traill, daughter of John Traill of Elsness, who married James Traill of Woodwick in 1712. The recipe shown is a modernised version of the original, so if you would like to follow the original:

Take a mutchine of Sweet Cream 10 Eggs keep out some of the whites thicken it wt flower melt half a pound of sweet butter mix it among the batter wt a gill of Seck or half a Gill of brandy 3 ounces of Sugar half a grated Nuttmug let your pann be hot when you pull in the batter to make them and serve them up Nicely.

There's some other "lovely" recipes in this book which we might feature in the future. Anyone for Cods Head the Scots way? No, then maybe A Hash of Calves Head? Ok, maybe not.
Posted by The Fonds at 15:07 1 comment:

Email ThisBlogThis!Share to TwitterShare to FacebookShare to Pinterest
Labels: cookery, recipes, the fonds 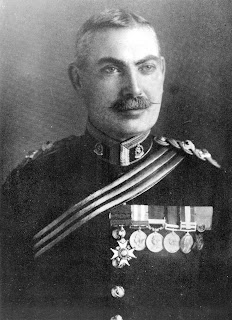 Now that the Rugby Union Six Nations Tournament is underway, we're remembering that Orkney had its own Rugby international. Colonel Henry Halcro Johnston played full back for Scotland against England and Ireland in 1877. On those occasions Scotland thrashed England 3-0 and annihilated Ireland 20-0 with a magnificent six tries and four conversions. Those were the days!

This is not Henry's only claim to fame. He was born at Orphir House in the parish of Orphir in 1856, the fifth son of James Johnston, 11th Laird of the Coubister Estate. He later qualified as a doctor in 1880 from Edinburgh University and entered the army as a surgeon. There followed a distinguished army career which resulted in a number of decorations before his retirement in 1913.

As if his life was not full enough Colonel Johnston was also an enthusiastic botanist, writing in numerous publications about the plants that he had collected in Afghanistan, Mauritius, the Canary Islands, Madeira, Egypt, Gambia, Natal, India and Sierra Leone. He also put together a collection of around 4,000 botanical specimens to be found in Orkney and Shetland, which became the property of Stromness Museum. After his death this herbarium was transferred to the Royal Botanic Gardens in Edinburgh. His notes and observations have remained in Orkney and are in the Archive awaiting cataloguing.
Posted by The Fonds at 16:45 No comments: