Here are a few items from our sixth instalment of our Orkney at War Exhibition which describe how World War 1 affected Orkney and Orcadians. These archive items are taken from records during November, December 1915 and January 1916. We continue with the diary of Margaret Tait and introduce the souvenir book of nurse Lily Gunn. We see the construction of an airship station, stories from the front, elections postponed and football banned.


Cinema Ambulance Day
The Orcadian newspaper, 6th November1915: The proceeds of this theatre on Tuesday, Nov 9 will be handed over to the Cinematograph Trade Ambulance Fund. The object of the fund is to raise  the sum of £30, 000 in order to present the British Red Cross Society a complete Motor Ambulance convoy with appurtenances, consisting of  50 motor ambulances for the use of the army in Flanders or elsewhere.
Along with the usual programme of pictures, there will be songs by Mrs Rintoni, Miss M. Gibson. Mr J Lennie, Mr W. Burgess, duet by Miss Cecilia Sinclair and Mr J. F. Shearer and music by a small orchestra. The above songs will be illustrated on the screen by lantern slides. Note change of opening. Doors open at 7.30. Commence at 8. Prices 6d and 1s. No reserved seats. 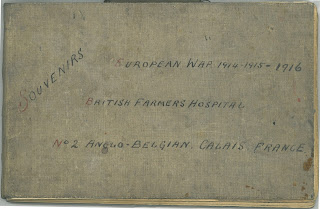 Introducing a Souvenir Book containing drawings, poems and messages from patients of the British Farmers Hospital and the Number 2 Anglo-Belgian hospital, Calais, France from 1916 to 1918.
The book belonged to Elizabeth (Lily ) Gunn, ( of Glaitness) an Orcadian nurse 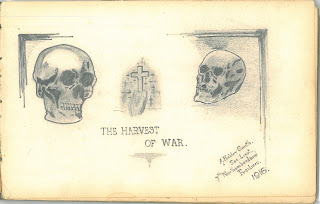 The picture above shows a soldier's feelings of the war early in 1916. Some of the pictures are grim and some are quite pretty, see below. 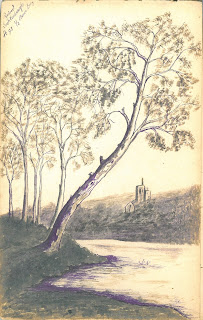 "The Clerk stated that while under the provisions of the Elections and Registration Act 1915 Town Council elections are postponed for a year the office of Provost, Bailies and Honorary Treasurer is not affected by the Act i.e. the holders of these offices do not continue in the office beyond the date at which they would in ordinary course have demitted office though their term of office as Councillors is extended for a year. In these circumstances Bailie Flett becomes by law Senior Bailie and the offices of Bailie and Honorary Treasurer now fall to be filled up. Councillor Maclennan was elected a Bailie of the Burgh and having accepted office thanked the Council for the appointment"
The Orcadian newspaper, 27th November 1915: R.N.R. Officer Assaulted:- before Sheriff Mercer at the Orkney Sheriff Court at Kirkwall on Saturday, Charles Spiers, fireman onboard the drifter Dardo, was charged that on 18th November  at St Margaret’s Hope he assaulted an assistant paymaster R.N.R by striking him with his clenched fist; and at the same time and place committed a breach of the peace. Accused pled guilty and was sentenced to seven day’s imprisonment. 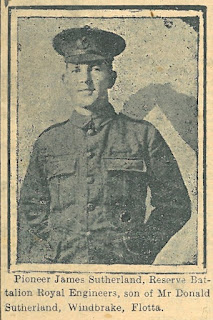 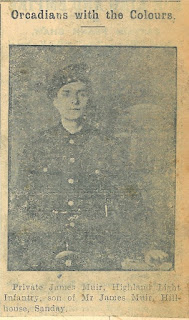 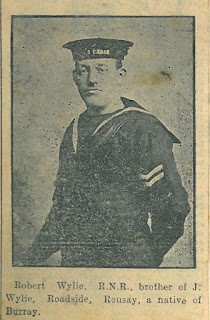 K1/1/17: Kirkwall Town Council minutes, 15th December 2015
"It was agreed to recommend that there should be no ba' playing on Xmas or New Years day in the Burgh"
Stromness seemed a little more strict:

A report from the front of an Orcadian being starved:
Lance Corporal W J S Leask of Coldomo, Stenness was a prisoner of war in Germany by Christmas 1915
﻿
"Up until a fortnight ago he wrote cheerful letters and postcards, but I noticed when he was removed to another prisoners' camp his postcards were not so cheery, and today I have one from him which has annoyed me very much as it hints unmistakably that he is being starved" 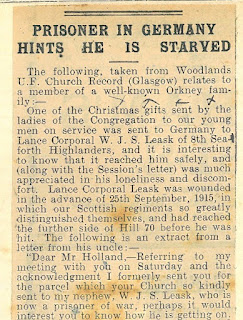 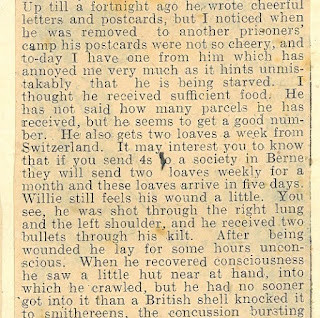 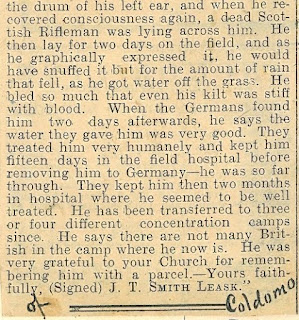 Mr Ford’s Kirkwall Impressions
Britain Wants Peace
The Orkney Herald  22nd December 1915: Christiania, Saturday.- The steamer Oscar II with the Ford expedition, arrived at half past three this afternoon at Christiansand. There was no official or other reception, and only pressmen went on board. Mr Ford spoke cautiously regarding the manner in which he will act. He said the British were very gracious at Kirkwall, but none of the party were allowed to land and there was no official reception. Mr Ford said he had the impression at Kirkwall that the British wanted peace, and he expressed the opinion that this was also the case with the people in other belligerent countries. The basis for peace must he added, be the status quo ante bellum. Madame Rosika Schwimmer said the intention of the expedition was to agitate for a peace conference with representatives of both sexes from neutral countries. The platform must be accommodated to circumstance.