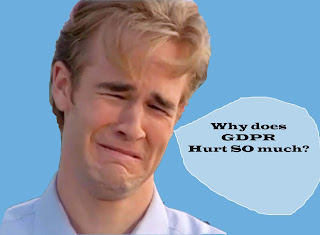 We are crying again in the archive. This happens a lot... probably the dust or something...


But today, it is because of GDPR, otherwise known as General Data Protection Regulation which comes into force today. You may all be aware of this new legislation as we have all received numerous emails from companies keen to hold on to our data and put up with irritating pop up windows every time we want to check on handsome movie men.


Basically, the idea is that we have to specifically consent before someone takes and keeps our data and they can only keep it for as long as they need it. This is obviously a good thing. Orkney Archive will securely keep your data for only one year after you get in touch with us for an enquiry.


But oh, readers! We are an ARCHIVE which means we hate to throw anything out. One man's rubbishy pile of old papers is our delightful and informative gold. Our storerooms heave with old negatives, notebooks, receipts, cash books, diaries and letters and we LOVE IT.


It is with a heavy heart these last few weeks that Dusty and the Fonds have scrolled through our vast database of past enquiries, deleting the names and addresses  of people we have come to know as old friends.


"Goodbye Bob Bunting"* whispered Dusty* through tears as she deleted our first ever enquiry.


"Farewell Mavis Moobs"* wept the Fonds* as he shredded an enquiry regarding 18th century paving stones in Stromness.


We can still hold on to any information uncovered during the course of investigation for future reference but our enquiries seem all blank and impersonal now that they contain correspondence addressed to and signed by no-one... Sob...


* All names have been changed for this blog post re: GDPR
Posted by Archiver at 16:20 5 comments:

Happy 'Aald Beltin' dear readers! According to our beloved Ernest Walker Marwick, the Old Beltane or May Day used to fall, by our calendar, on the 12th of May.


It has been a very wet, cold winter here in Orkney and, although we have had a wee share of sunshine, there is still an annoying nip in the air. April and May are always thus. To quote Mr Marwick:


"We have no sooner had a couple of halcyon days, blue as sapphire, than there comes a bleak wind which cuts us to the bone..."


Consequently, the farmers have been a bit later than usual sowing their fields but, according to Marwick, neither peats were cut nor bere seeds sown until 'Orkney Beltane (Old Style)' with this tradition still being observed in some parts of Orkney and Shetland in the 1970s.


Bel for sun and tein for fire, Beltane was a farewell to dark winter and a welcome to Summer months. F. Marian McNeill, author of The Silver Bough tells how "fairies, witches and all the uncanny creatures of the Otherworld" were abound on May Day eve and sprigs of rowan were carried, worn and festooned around the home to ward them off. Rowan was also perched in the midden (the bin, basically) because that is where the 'black sisterhood', i.e. witches, used to hang out. Keep it classy sisters.


As is usual with Orcadian traditions, the Beltane celebrations would not be complete without a liberal sprinkling of urine for lucky domestic animals . For it's healing powers obviously... Honestly, this example is the tip of a urine-soaked iceberg. People used it ALL the time. They sprinkled it on their animals, women about to give birth, left it lying about in buckets, put it in their eyes, drank it... All. The. Time.