Beatrice Garvie was the doctor on North Ronaldsay in the 1930s. Unlike other doctors who came and went within a year on the ‘Highlands and Islands Scheme’, she stayed for well over a decade. She was an excellent photographer, and took many photographs and slides of island life, which show the families who lived there, at work in the fields, and on the shore, at the harbour, and with their new babies.

Her photographs are very natural, and not posed. I think that says something about the skill she had, and also, that the community were relatively at ease with her presence. I have a personal connection with these photographs, since my Gran, Jenny South Ness, grew up on North Ronaldsay, and the first time I came across Beatrice Garvie’s photos was in the archive on the island, where I was delighted and moved to find pictures of my Gran in her early life, and then, of course, I came to know the family pictured around her too.

By the time Beatrice Garvie was working on North Ronaldsay, she was in her fifties. When I thought about that, I wondered if she had been one of the first women to train in medicine.

I also thought it possible that, if she had made such a careful record of island life through her photographs, perhaps she had done the same in other places she had lived.

Lockdown was an opportunity to start finding out more. Thanks to an amount of detail now available online, and the helpful corroboration of archivists in Scotland and England, I've put together quite a full picture of her life. The archives on North Ronaldsay, and in Kirkwall, have a collection of her photographs, and I’m very grateful to the archive for preserving these so carefully. Thanks too, to Ann Marwick, whose meticulous and sensitive recordings of memories through her sound recordings, are an immense resource for seeking detail from the past.

As restrictions lift, I look forward to visiting North Ronaldsay and talking to folk who still hold her in living memory. This is the story so far.

Sometimes people have told me that Beatrice Garvie had worked in India, just before she came to North Ronaldsay, and it is fairly well known that she worked there as a medical missionary. In fact, she went to India not long after she qualified. Here is a picture of her in Rajputana, where she worked in the Zenana, with women and children.

She worked alongside another doctor, Jessie Smith, although this photograph shows her with a Miss Miller. This dates from 1900.
She took the ‘Triple Qualification’ which was open to women and people from overseas seeking to gain an equivalent qualification in medicine. She had passed all her exams by 1895. This qualification was endorsed jointly by the Edinburgh and Glasgow Royal Colleges. When you look at the list of other names in the exam rolls, hers is usually the singular female. Martha Florence Armitage was another woman to take this qualification at around the same time.
I now know that Beatrice Garvie worked in Glasgow and in Islington, Stirlingshire, Paisley and Sheffield and Rotherham. She worked in ‘Fever Hospitals’ and specialised in tuberculosis. She gained promotions as an officer of public health, as well as studying, when she was in the Sheffield area, for a further qualification in public health. She considered the effects of poverty on public health in a report that she wrote. She had to deal with an amount of prejudice, most likely throughout her career.

She was an active supporter of suffrage, at least as far as making and collecting donations to the NUWSS (National Union of Women Suffrage Societies), in particular to the NUWSS field hospitals for Russian refugees, which were an important and very well organised relief effort for these refugees, although they are little recognised in the history of this time.

Here are some intriguing details from her career in the early 1920s that may illustrate how it was to be a woman working in public health just after the end of the 1st World War.

In 1920, Beatrice Garvie was the Tuberculosis Officer in Fife, having worked as the Assistant Tuberculosis Officer in Tayside just previously. There are records of council committee meetings from her time in Fife. In early 1920, she draws notice to the time being wasted, as she travelled to visit men in their homes, to inspect them for TB, after their return from the war. She explained that men were rarely in, despite having been notified of the time and date of the appointment. She asks that a change in practice might call the men to visit a clinic, and therefore save all the hours of her wasted travel, over a large geographical area. A committee member points out that this would necessitate the men traveling instead, and risking loss of a day’s wages. This is questioned by another committee member.

Then at another committee meeting, Beatrice Garvie relates that the ‘civilian’ community are suffering from TB, through insufficient inspection, as so much time is taken with the men who have returned from war. There is no record of any action being discussed, or having been taken.

Shortly after this, Beatrice Garvie takes a month’s sick leave. At the end of that, a medical officer ‘intimates’ to the committee that she needs a further 6 months sick leave. This is refused, and she is given a month’s notice. Then there is discussion of the need to appoint a man to the role, and that this role, with other responsibilities included, could be advertised at a salary of £1000 pa. I haven’t found much detail on Beatrice Garvie’s salary, what I have found was in the area of £400 pa.

She began work in North Ronaldsay in 1929. Sydney Scott tells Ann Marwick, in an Orkney Sound Archive oral history interview, that “she was very….. you ken what I mean?” when asked how she fitted in with the folk on the island. He says that women were “frightened of her”, although Tia, his wife, quickly responds “I wasnae afraid of her”. They do not agree in the interview on how folk felt about her. Tia is more ready to say she was a good doctor, and that she became better liked as time went on. Both agree that she was friendly with everyone on the island. A newspaper report notes that she and John Tulloch of Upper Linnay won the Hogmanay wheelbarrow race, in 1943, ‘to great appreciation’.

She was given gifts during her time on the island and when she left. These included a jade dressing case and a wallet of notes on her retirement.

Ann Marwick expressed a feeling that taking the photographs and giving them to people would have been appreciated by the community.

There was an internment camp for Polish people in Auchterarder, in fact there were a number of these in Scotland, and they were considered sovereign Polish soil, administered by the Polish government in exile. There are records of abuse in the camp at Rothesay, where it seems that Polish Jews, communists and gay people were kept out of the way by the government, in exile. I haven’t had the time yet to investigate what the camp was like at Auchterarder.

At the end of the war, there was a large Polish community in Auchterarder, with no chance of returning home. An agricultural school was set up by another Polish captain.. Contact with members of an online group called ‘Auchterarder Memories’ revealed that Castlebrae had extensive grounds, in which there was a small farm, and vegetable gardens. People in the group had memories, years after the war, of elderly Polish men still employed to work in the grounds, and of Polish staff in the kitchen and carrying out domestic roles in the hotel. Beatrice Garvie lived here until her death, in 1959. I hope to find more links to Castlebrae, and the other people who lived and worked there. There was a Mary Lunn, who had been a music teacher in Edinburgh, and retired to Castlebrae at about the same time as Beatrice Garvie did, and who lived there for over twenty years.

It is tempting to wonder whether a social network of some kind existed to link these single women, perhaps from the early days of degrees being awarded to women, or through the suffrage campaign, or some other link. It is also tempting to wonder what it was about this strong and purposeful community, that chimed with Beatrice Garvie.

There is a lot more to find out, and equally, a lot more that I could have included already, but will return to another time. Perhaps you have a memory of Beatrice Garvie, or know something more about her. Maybe you’ve come across a set of photos in another archive that were taken by a woman doctor, between 1900 and 1950, and this will turn out to be another set of pictures that she took. Any detail, no matter how slight it may seem, can add a great deal to a picture of a person, and I’d be very grateful to hear from you!

The Dr Garvie Photo Collection is part of the Orkney Archive and consists of over 500 photographs of people and places across North Ronaldsay.

Many of our Archive Items are unique and that has posed a problem during COVID lockdowns where travel to Orkney has not been allowed.

Example of archive item from the 15th century:

Our Archive is home to many thousands of records that are simply not available anywhere else. They record life in Orkney for the last 500-600 years and are a rich source of information.

Example of document from the 17th Century: 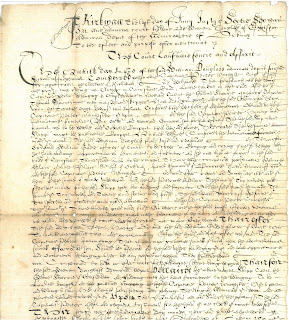 In normal pre-COVID times these records have proved to be a big attraction to those who study Orkney's history. People have travelled here from all over the world to look at our collections, whether for a PhD, a TV documentary, for family history, property history, social history, research projects for universities or schools or personal, the reasons are endless.
Example of archive item from the 19th century:

Recently we have welcomed back our first visitors from outwith Orkney and we look forward to meeting all our future visitors still to come.

We would love to hear your stories and arcs and tangents

that bring you to research in Orkney.

In the meantime we run an enquiry service that can help to identify which records we have which would help with your research and can send you lists or images for a small fee.