On this day 27th July in 1880 we have a curious Sheriff Court Petition for Benefit of the Act of Grace. It's the only one in the whole collection, so I thought I'd share it with you all.

I realised this is my geeky side revealing itself when I told the story to Archiver and she could not stop yawning. So please comment if you find it interesting, then I can point at her, laugh, and say "I told you so!" In a respectful colleague to colleague way, of course.

Definition Act of Grace: A privilege or concession that cannot be claimed as a right: e.g. the bonus remains a payment made as an act of grace
In Scots Law this concession mainly referred to civil debt. When a person is imprisoned for not paying their debt, they can petition the court to let them out if it can be proved they do not have the means to pay. If the debt is an aliment (a fund of maintenance), then it can be changed to installments of not less than three-pence. [Information from A Dictionary of the Law of Scotland by Robert Bell, pub.1815]

Our example is about William Gunn, a shoemaker from Orphir in the West Mainland who is in Kirkwall Jail and Jane McKay from South Faray or Fara, an island in Scapa Flow. 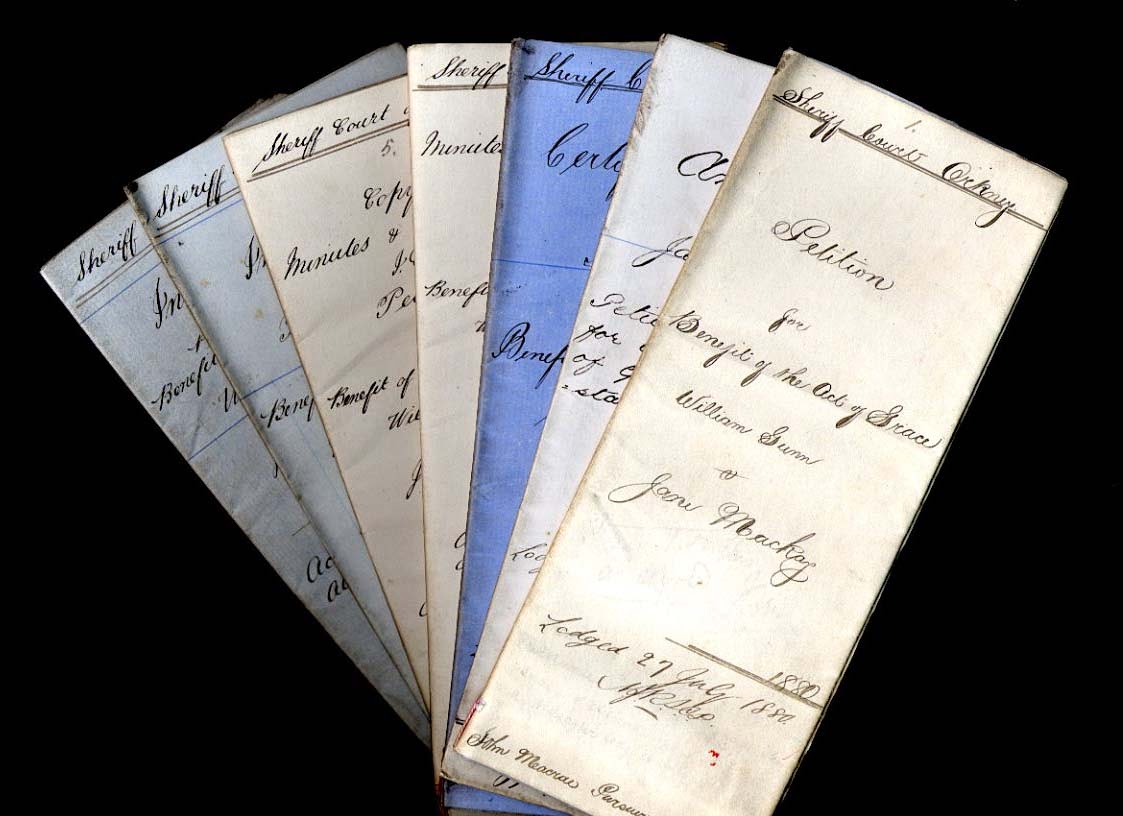 Doc 1. Petition on behalf of  William Gunn, from Orphir, who is in prison for not paying a debt to Jane McKay "the incarcarating creditor" who resides in South Pharay. The debt being the total sum of "seventeen pounds, sixteen shillings and ninepence" to pay for the birth and subsequent care of an illegimate male child since 17th February and "taxed expenses of process". William Gunn's petitioner states that he is "in poor circumstances and is neither able to pay the said sums nor to Aliment [maintain] himself in prison. He is therefore under the necessity of applying to the court for the benefit of the Act of Grace." John Macrae, Pursuers Agent, 27 July 1880.


Doc 2. Answers for Jane MacKay by her solicitor William Cowper, states that William Gunn has "movable property to the value of about fifteen shillings Sterling" and so he is not entitled to the benefit of the Act of Grace. Lodged 30th July 1880.


Doc 3. Certified copy of the Petition, 31st July 1880.
Doc 4. Minutes and Interlocutors: The Sheriff Substitute orders William Gunn to be brought to court to be examined by him on Friday 6th August. But on Friday 6th August, "Macrae for the pursuer respectfully craves leave to withdraw the action". This craving is granted.
Doc 5. Copy of Minutes and Interlocutors.
Doc 6. Copy of Inventory of documents.
So William Gunn did not get his Act of Grace after all. But did Jane ever get any money? Who was the illegitimate male child? There are no more documents to give these answers unfortunately.
Archive Reference: SC11/5/1880/98
Posted by Dusty at 09:00