Get Off My Island!

Long-term readers may remember our great excitement when Eastenders hosted a live episode for their 25th anniversary. 'How can this be topped?' we asked. By live WEEK 30th anniversary Eastenders, that's how.


We have been celebrating here in the archive by beating each other on the head with ashtrays, having secret affairs and accusing loved ones of murder. We have also spent most of our working hours in the pub or the caff without detriment to our jobs. Sorry customers.


We have also had a look at Orkney's own steely matriarch of the Balfour family, Frances Ligonier Balfour.


Frances has been described as 'supercilious, ironic with a sharp wit and fond of argument'.


Although the daughter of an aristocratic father, Frances was actually illegitimate but this does not seem to have harmed her social standing. Intelligent and clever and plain, Frances had struggled in the late 18th century marriage market until she met 'flamboyant and charming' Thomas Balfour. Tom was ten years her junior so Frances lied about her age and they were wed soon after meeting.


Frances had three children in her late thirties and was devoted to them and her beloved husband who, unfortunately, kept disappearing off to Dublin only to return with lice, typhus fever and illegitimate children on the way.


As Tom lay on his death bed, Frances coolly received a volley of increasingly frantic letters from her husband's pregnant mistress. She agreed to uphold Tom's offer of a £50/year annuity for the child and to keep in touch.


"my daughter was a legacy bequeathed to you and I have no doubt you will fulfil your promise." (The mysterious Mrs Jackson/M/Clifford to Frances soon after her daughter's birth.)


The year before, Frances had been outraged by her daughter Mary's elopement with the socially inferior Church minister Alexander Brunton.


"I have been betray'd by the blackest ingratitude and perfidy.They went to Glasgow as soon as the ceremony was performed. They are still there but have not condescended to write,." (Frances to her sister-in -law).


Mary and Alexander further horrified her when informing her of their plans to take in lodgers to make ends meet.


"Your Sister and her Husband I am inform'd are to go to reside in Edinburgh immediately. They propose taking Boarders. I wish I was rich enough to prevent so disgraceful a means of increasing their Income" (Frances to her son William).


Frances was more relaxed about William's love life as, 5 years after the elopement, when he was considering taking a wife she gave him this advice:


"Let it not raise your vanity if I tell you, I believe you may throw your handkerchief to any of our Orkney Belles. Men are scarce, competence scarcer, and a Gentleman the scarcest of the three. You ask me if there is any good natured Girl of my Acquaintance who would accept of you? In a matter of such importance you shou'd chuse for yourself, but my present advice is (tho' rather a licentious one for a parent,) that, for a year to come you wou'd take a Mistress, not into keeping, but a Lady who can keep you..."


Like all the best soap matriarchs, Frances didn't mince her words and was as tough as old boots. She died of a terminal illness in 1813 leaving behind a rich, well-spiced correspondence for future historians to savour.


"You can have no idea what a set of wretches this Country (Orkney) is inhabited. An honest Man would almost stand alone in it." 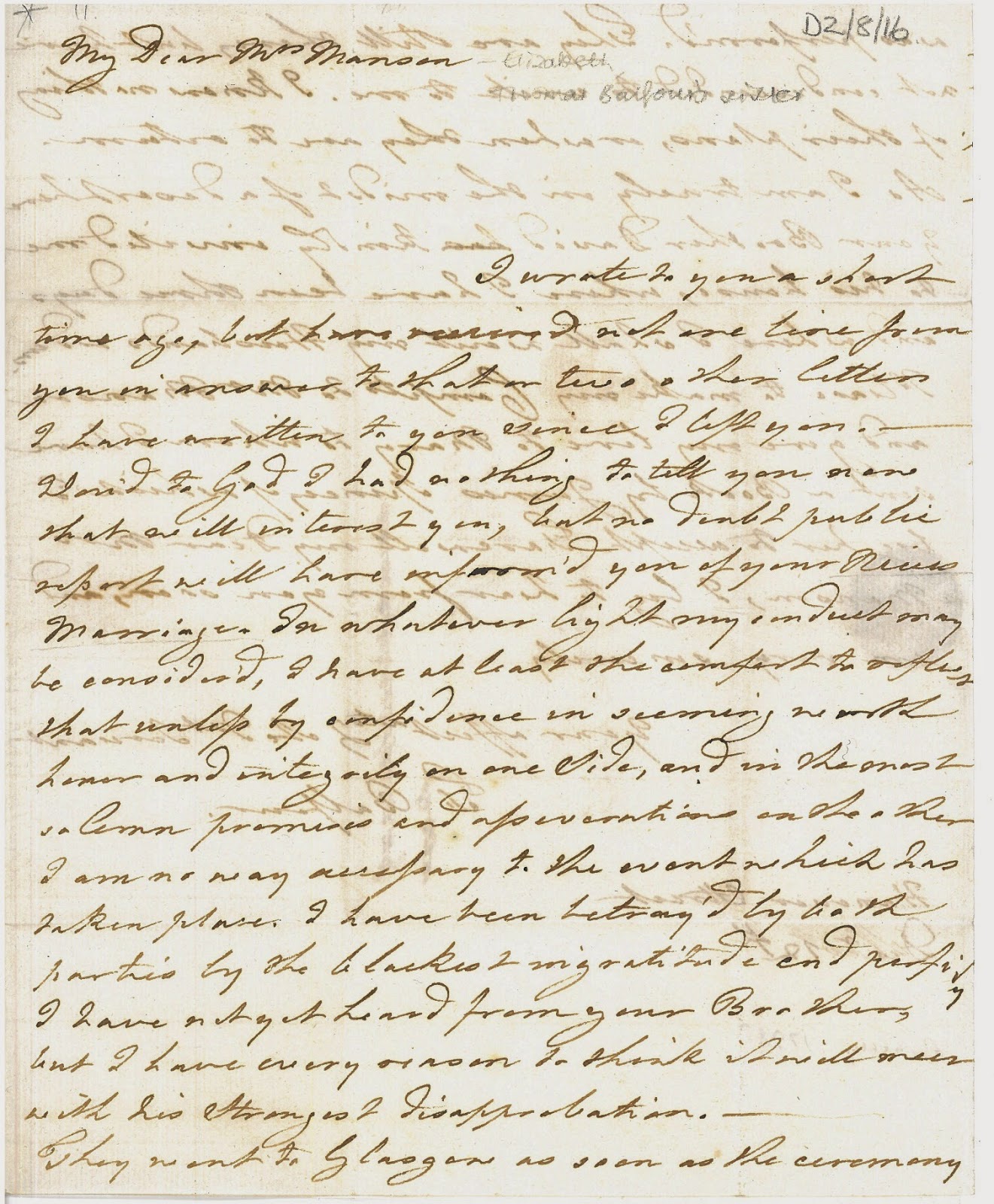 Who Was Who In Orkney by W. S. Hewison

Half Way To Spring...

These days, the big February festival would seem to be Valentine's day, mainly because this celebration is easily commercialised and has been since the 19th century.


In the Northern Isles, however, Candlemas, which falls on the 2nd of February, was far more important to young people. We have blogged before about some of the strange rituals young Orcadian lasses followed when trying to find the identity of their future husband. According to local folklorist, historian and archivist's dream, Ernest Walker Marwick, Isles folk would have "thought it soft to send a love token" but that didn't stop the young women from following a Candesmas ritual:


"It was at Candlemas that the lasses chased the crows. In the grey dawn of a winter morning, a maiden would steal forth with a fluttering heart, and give chase to the first 'craw' she chanced to see, and anxiously watch in what direction it flew, for there dwelt her husband to be, and there lay her future home."


Candlemas was also very important as that was the very first day that ploughing could commence in Orkney. It was also an immovable date (40 days after the birth of Jesus) from which all other Easter holidays could be calculated:


"First hid comes Candlemas Day,
And than the new mune;
And than hid come Brose Day
If hid wis ever so sune,
An than there's forty days
Atween Brose Day and Pase Day (Easter)
The forty days o' Lent."


Lastly, the other significance of this date to the islanders was as a weather predictor:


"If Candlemas Day is fair and clear
There'll be twa winters in the year."


Groundhog day in America also falls on the 2nd of February and has a similar significance. If it is cloudy when the Groundhog emerges then winter shall soon be over. If it is sunny enough for the creature to cast a shadow and startle himself back into his den then six more weeks of winter are to be endured.


We have been complaining about the weather a lot recently which is most unlike us, but we were very cheered to see several candle-lit windows in Orkney this winter. Flickering flame or battery powered plastic both lifted the spirits during this stormy winter. When discussing this candle profusion with a customer she said:


"I always light a candle every morning from the Winter Solstice to Candlemas." We liked this idea so much that it inspired this post.


Before calendar re-jigs, the 13th of December was the date of the Winter Solstice and that is when the Scandanavian festival St Lucy's day is celebrated in Kirkwall.


On these cold, Northern rocks, you sometimes need a bit of light to keep you going through the long, dark nights.

Seven diamonds shine
In the deepest darkest mine

Seven fish go, a glimmering shoal
Under the ice of the North Pole

Sweet St Lucy, be kind
To us poor and wintered and blind.


Lighting Candles In Midwinter taken from The Collected Poems of George Mackay Brown, Edited by Archie Bevan and Brian Murray.

Posted by Archiver at 16:32 No comments: