As part of our Orkney at War exhibition we have a few original items on show in the Archive Searchroom.

One gift we received a couple of years ago which we are quite excited about is a Visitor's Book from the Y.M.C.A. in Longhope.

"Long Hope Bay during the war was the headquarters of the auxiliaries of the Grand Fleet, and never in its history were so many vessels of such varied types assembled in the harbour. The village of Long Hope, where there is a good pier, naturally became much frequented by officers and men from the ships, and eventually a commodious Y.M.C.A. was erected, which did much useful work. Tea on the beach was always a pleasant change from ship life (and tinned milk!), and the Post Office at Long Hope became a favourite rendezvous for informal tea-parties."

The book records many visitors and volunteers to the Y M C A from August 1916 - 1939. The first page contains some well-known names: 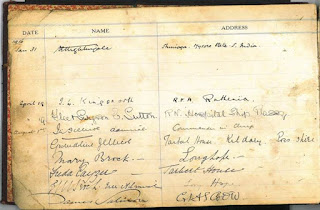 It is signed on 1st August 1916 by Admiral John Jellicoe, Commander in Chief. It is also signed by his wife Gwendoline Jellicoe and her sister, Freda Cayzer from Tarbert House, Ross-shire. I do hope they enjoyed their cup of tea.
Archive reference: D1/1207
Other items on show are:
John Fraser's record of Orcadians service in the 1914-1918 war which is an indexed scrapbook of soldiers deaths and officer ranks of Orcadians in WW1 containing mostly press cuttings, which include photographs of soldiers and officers from all the parishes of Orkney who served and died.
Archive reference: D1/692
Lily Gunn's Souvenir and Autograph book which contains drawings, poems, photographs and messages from patients of the British Farmers Hospital and the Number 2 Anglo-Belgian Hospital, Calais, France from 1916-1918.
Archive reference: D1/983
An extract of Military Tribunal Register of Cases
A Technical Instruction Committee of the Secondary Education Committee was formed in 1910, which in the following year became the Advisory Committee concerned with extension work in Orkney of the Aberdeen and North of Scotland College of Agriculture. On account of its links with agriculture this Advisory Committee was in turn metamorphosed into the District Agricultural Committee on Food Production in 1916, and had thrust upon its various functions far removed from secondary education, including matters pertaining to military recruitment and the supply of labour for farms. By an extension of this aspect of its work the committee was used, according to the Agricultural Military Service Act , 1916, for the hearing of appeals for exemption from military service on grounds of agricultural necessity.
Two men mentioned in this particular extract are:
John Sabiston, aged 19 from Northbigging, Swona, a ploughman, fisherman and boatman was refused exemption from military service on 28th April 1916. He appealed on 19th May 1916, but his appeal was dismissed on 2nd June 1916.
Peter S Garrioch, aged 40, from Grindally, Orphir, a farmer, was granted conditional exemption on 11th April 1916.
This extract contains about 25 names and we have about 20 pages of names in the whole register. Our friends at the Orkney Family History Society have kindly volunteered to transcribe all the pages for us.
Archive reference: CO5/3/8
This small exhibition of original items will stay on display until the end of August 2016.
Posted by Dusty at 12:01 No comments:

Here are some items from our eighth instalment of our Orkney at War Exhibition. The display attempts to show how World War One affected Orkney and Orcadians using items from the Orkney Archive collections. Items such as newspaper reports, scrapbooks, council minutes, photographs, letters and diaries.

This quarter of May, June and July 1916 is dominated by reports of tragic events at sea: The Battle of Jutland on the night of 31st May - 1st June and the sinking of HMS Hampshire and the death of Lord Kitchener on the night of 5th June. 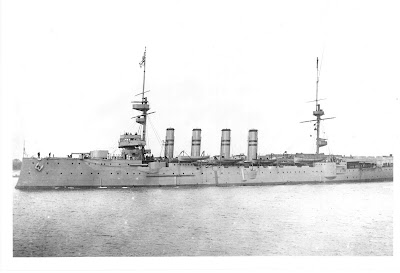 But first from Margaret Tait's diary:

Sunday 1st May 1916:
Have been in bed for three days with a cold. Since last writing Willie has been twice to Edinburgh with German prisoners. I went down to the drill hall and saw three of them, one of whom winked at us. He was a black tinker looking character. One of the prisoners was found in a trunk, supposed to be his wife's travelling trunk and had come all the way across the Atlantic only to be caught at Kirkwall. How disappointed his wife must have been. Oh dear I wish my cold was better, I'm so tired of lying in the house.
Tomorrow is feeing market day. [where farmers engaged servants and labourers for the coming term] 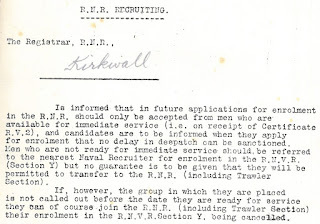 Then from the diary of Margaret Tait:

Saturday 3rd June 1916:
Rumours were afloat that a naval engagement was going on on Wednesday 31st May but I could not believe it true. Last night Jim and I worked until 11pm putting new glass in a large picture for one of our Fleet men on the Bellerophon when Maggie came in and told us a battle had really taken place and 10 of our ships were sunk. After that I could do no more work for thinking of all our men who had pictures to be framed and who, poor souls, might never come back. Such a lot of Fleet men come in with pictures to be framed.
I kept hoping all night the sad news might prove untrue so this morning one of the men of the Royal Oak, one of the ships in action, came in with some pictures to be framed and told me it was too true. They can't tell very much so he said, "It's all very sad and that's all I can tell you".
We had heard the Malborough was sunk but he said she would come back all right in a little while. Poor chap he was so hurt because he could not get words to his friends of his safety. All day on Saturday the Territorials were burying the dead in Longhope, so we were told. What a gloom was cast over the town and how depressed we all were to think of our noble ships and brave sailors and officers going down that summer night on the North Sea or off the coast of Jutland.

And in the Orkney Herald, the first local official report:

And a personal report in a letter to A W Cursiter written on the 9th June: 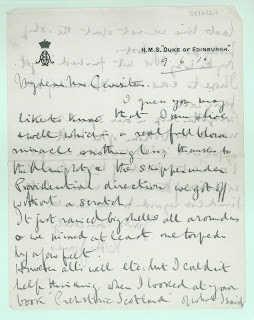 My dear Mr Cursiter, I guess you may like to know that I am alive & well which is a real full blown miracle & nothing less; thanks to the Almighty & the skipper under Providential direction we got off without a scratch.
It just rained big shells all around us & we missed at least one torpedo by a few feet.
However all's well etc: but I couldn't help thinking when I looked at your book, "Prehistoric Scotland" of what I said... 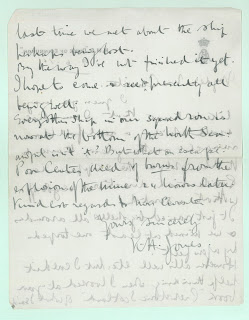 ...last time we met about the ships perhaps being lost. By the way I've not finished it yet. I hope to come & see you presently all being well.
Every other ship in our squadron is now at the bottom of the North Sea: awful isn't it? But what an escape! Poor Center[?] died of burns from the explosion of the mine 24 hours later.

Kind regards to Mrs Cursiter,
Yours sincerely K A Jones

Back home in Stromness on the 6th June the local town council met to discuss the price of Gas: 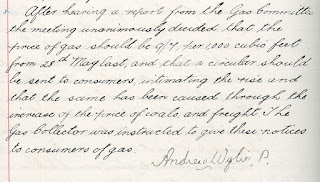 After hearing a report from the Gas Committee the meeting unanimously decided that the price of gas should be 9/7, per 1000 cubic feet from 28th May last and that a circular should be sent to consumers, intimating the rise and that the same has been caused through the increase in price of coals and freight. The Gas Collector was instructed to give three notices to consumers of gas.
(sgd) Andrew Wylie P. [Provost]

Then from Margaret Tait's diary news of another tragedy:

Wednesday night [7th June]
Just as I was preparing for bed last night [Tuesday 6th] word came by wireless that a Cruiser was blown up off Marwick Head. A wild storm was raging so I could not sleep for the thinking of the poor souls struggling in the water and such a wild coast that no help could reach them in such a storm. This morning we heard that it was the Hampshire and later we heard that Lord Kitchener and all his staff were on board. I kept hoping such a calamity would prove to be untrue.

Thursday [8th June]
Alas it is true and every sailor on board perished except 10. Willie was up at Birsay today looking for the bodies who might be washed ashore. This seems to be a black week in the history of the Empire.

Then the official report was printed in the newspaper:

The secretary of the Admiralty has received the following telegram from the Admiral Commander in Chief of the Grand Fleet:-
"I have to report with deep regret that H.M.S. Hampshire (Capt. Robert J Savill, R.N.) with Lord Kitchener and staff on board was sunk last night about eight pm west of the Orkneys, either by mine or torpedo. Four boats were seen by observers on shore to leave the ship. The wind was N.N.W. and heavy seas were running. Patrol boats and destroyers at once proceeded to the spot and a party was sent along the coast to search but only some bodies and a capsized boat have been found up to present. As the whole shore has been searched, I fear there is little hope of there being any survivors. No report has yet been received from the search party on shore. The Hampshire was on her way to Russia."

And in Margaret Tait's diary:

Sunday 11th June 1916
There's a memorial service in the cathedral tonight for Lord Kitchener. His loss is the greatest calamity the nation has got since the war began. The weather keeps very cold, not like June.

Note: this blog post contains personal viewpoints and reports issued at the time, so some of the information my be inaccurate.

The exhibition in the Archive Searchroom also contains postcards from a POW in Germany, more newspaper reports of the time, a plan of the ships locations at the beginning of the Battle of Jutland, other wartime photographs and naval reserve memos. Please do come in to see it if you are in Orkney this summer.

Click on the label "Orkney at War" below to see more posts in this series.
Posted by Dusty at 15:58 No comments: