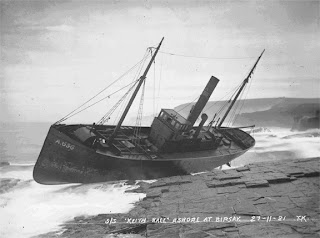 ﻿The fishing boat Keith Hall had an eventful life before finally running aground at Birsay. Originally a German registered vessel named Darmstadt, she was captured during the First World War, taken into the Royal Navy, renamed Carbosin and fitted with a gun. She served with the Navy until October 1920, when she was sold to her new owners in Aberdeen and registered as a line fishing boat.

On 19 November 1921 the ten man crew of the Keith Hall had just completed a successful fishing trip to the seas around the Faroe Islands and were heading for home a little after seven in the evening. They were making good time until they ran into a bank of fog. Blinded by the dense fog, they were pulled off course by a strong tide and, as a result, ran aground on the north coast of Birsay at about half past five in the evening of Sunday 20 November.

A telegram was sent to Stromness asking for the urgent assistance of the lifeboat and the rocket brigade. As it was Sunday and Stromness being a hotbed of religious fervour both crews were attending a service in Stromness Parish Church when they received the summons for help. Much excitement ensued in the town, as the lifeboat men rushed off to the boat, still dressed in their Sunday best, and the rocket brigade crew hurried off to find motor transport to take themselves and their equipment to Birsay.

The rocket brigade won the race and were first to arrive at the scene, where they discovered the Keith Hall aground at the entrance to Skipi Geo. On investigation they found that the crew had already abandoned the fishing boat to its fate and were still at sea in a small boat. The lifeboat arrived and, looking around, detected a dim light out to sea. This turned out to be the missing crew, who were keeping well away from the shore.
Sadly one crew member drowned.

There was something of a tradition in the islands that wrecks were considered fair game for scavengers. And so it was with the Keith Hall. This resulted in a group of young men finding themselves in front of the sheriff in February 1922, charged with removing “various articles” from the wreck. The court heard that on the night in question, the same night as the above photograph was taken, a huge crowd descended on the Birsay shore from the surrounding districts. “Great numbers” went aboard the wreck and souvenirs were removed in large quantities. It was claimed by the defending solicitor that no malice was intended and that “use and wont” was the prevailing custom. The young men had, in fact, returned all the items that they had removed.

Unfortunately, for the men, the sheriff was not swayed by this argument. One was fined £30-10s with the option of spending eighteen days in prison, while all the rest were fined £3 or fifteen days imprisonment. All the fines were paid.
Posted by The Fonds at 08:00 1 comment:

We're very excited! An Orkney Archive recipe book is currently featuring on the Scottish Council on Archives: Archives Awareness Campaign for 2011: the Edible Archive. Here are the lovely posters to prove it: 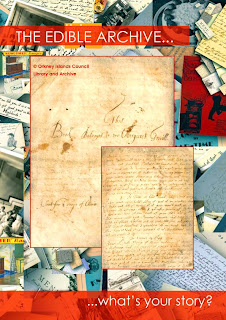 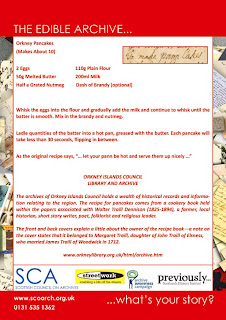 The recipe book reference number is D14/7/1. Other recipes featured in the book include: "To make Wafars"; "To Colour a Pigg"; and the delightful sounding, "A Half a Calves Head". Enjoy!
Posted by Dusty at 12:02 No comments: 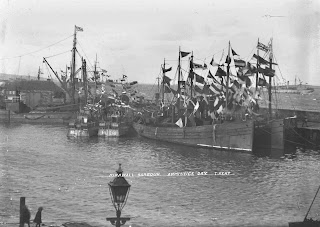 Prime Minister David Lloyd George announced on 11 November 1918 that an armistice had been signed with Germany at five o’clock that morning. All hostilities were to cease at eleven o’clock that same morning. The Great War was over.


The first indication of this momentous news in Kirkwall was made public at around half past nine in the morning. At that time naval vessels in Kirkwall Harbour, who had been alerted by a wireless message from their headquarters, began to sound their sirens. The townspeople must have realised that something was afoot and, even though it was to be some hours before it was announced to the press, the streets of Kirkwall were soon the scene of mass celebrations. The bells of St. Magnus Cathedral rang out in accompaniment to the ship’s sirens, and flags and bunting were soon to be seen displayed on many of the buildings. The Town Council, probably recognising that there was not going to be much work done that day, announced that it was declaring a half day holiday.

In Scapa Flow, word soon spread from the British ships to Flotta. In an echo of the Kirkwall celebrations sirens were sounded, flags were unfurled and the minister himself rang the parish church bells.

In the evening of the first day of peace a hastily arranged service of thanksgiving was held in the cathedral, at which every minister in the town took part.

Following the armistice agreement there was a welcome relaxation of some of the restrictions placed upon the public during the war years. Among them, masking on street lights could now be removed, as could the shading of lights in houses and shops, except those visible from the sea. People were reminded, however, that there was still a shortage of coal throughout the country.

It would indeed have been a time of great joy and relief to people the world over. A great number of Orkney’s young men, nearly 600 in total, had lost their lives in the trenches and battlefields of Europe, but now the survivors would be coming home to their families. 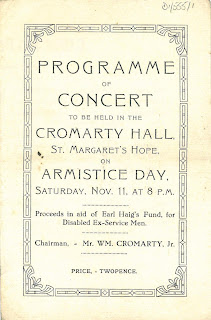 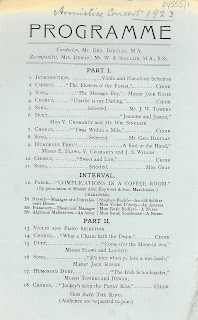 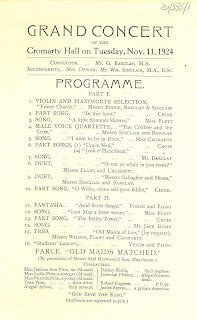 And here is a photograph showing the people of Kirkwall observing Armistice Day in 1926. 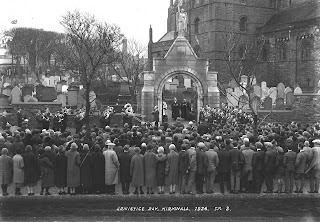 Blowing our own trumpet

I would think that if you're taking the time to visit this blog and read our posts then you probably have some interest in archives. But maybe not, perhaps you were actually searching for the Orkney Archery blog and your fingers got a bit confused, or maybe Orkney Hives, the local beekeepers blog. If so we are still happy to welcome you and take the opportunity to tell you what wonderful places archives are.

The Scottish Council On Archives has produced a very nice shiny brochure called Scotland's Archives Matter which explains lots of different ways that archives can help to enrich your life, understand where you come from and how you got to where you are, and lots of other things as well. It's available from their website and is well worth a read.