" I like living on an island because you feel safer because you know everyone and you know that you have less chance of being 'mugged' or killed." 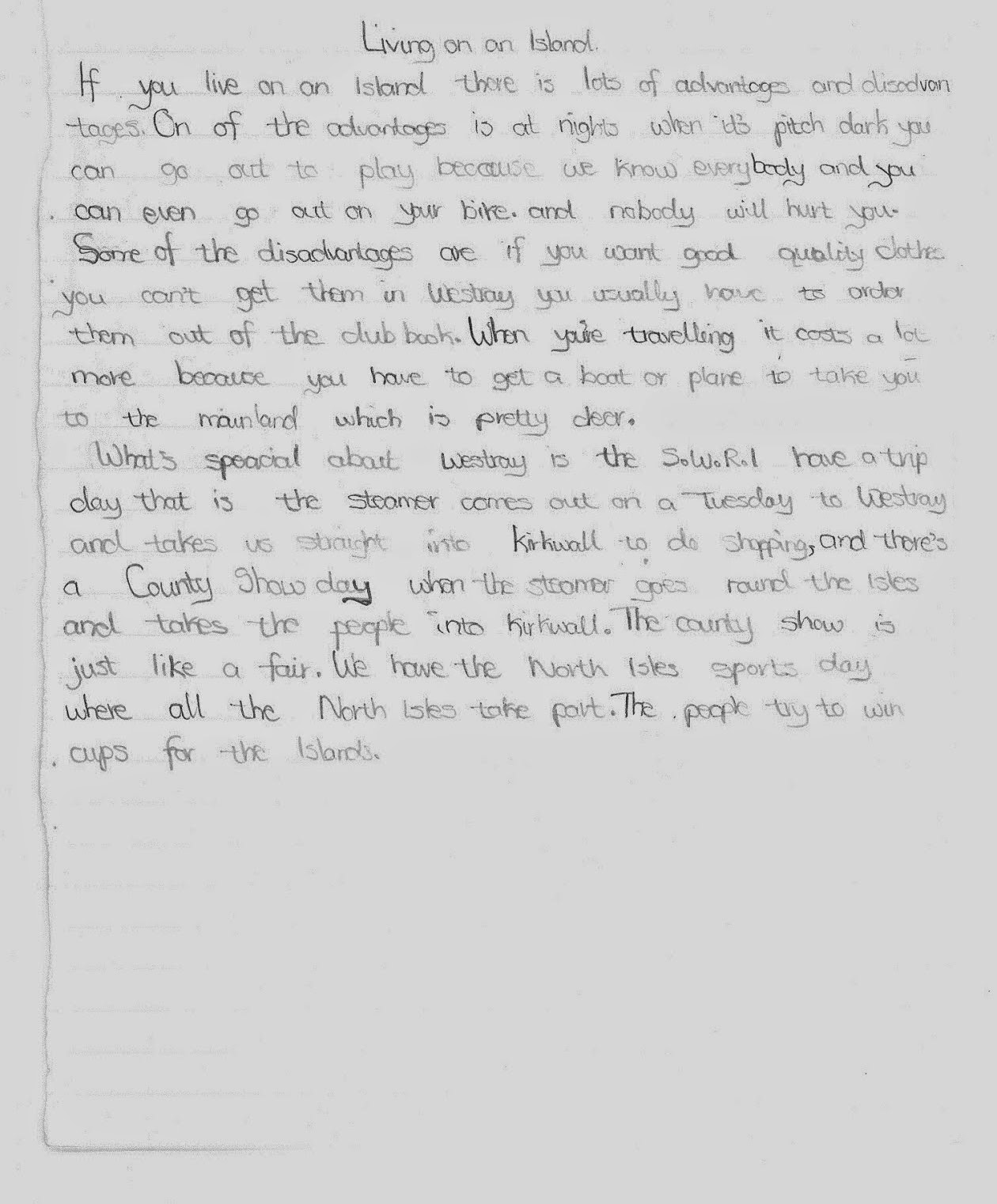 Accession No. 2043
We have a new acquisition this week, courtesy of the Glasgow Orkney and Shetland Literary Association.


Our exciting new bundle includes copies of Sanday Secondary School's magazine from the early 1980s,  a copy of Edwin Muir's The Scots and their Country, An article about the wreck of The Crown as published by Chamber's Journal, Collin's Geography of Orkney and a collection of photographic views of Kirkwall & vicinity published by Thomas Kent.

Our favourite thing, however, is a collection of essays by some primary school children in Westray. They paint a wonderful picture of life on the Northern isle detailing the peace, beauty and quiet of their home.

Mainland Scotland, however, and in some cases mainland Orkney are painted as dark, dens of iniquity, full of murderers, kidnappers and 'pepple we do not know' (sic)


"If you where going out at night by your self you might get lost or can't mind on your way home in the dark."


We have asked our Westray born-and-bred colleague about this and he cannot remember this being a prevalent view when he was growing up so perhaps this particular assignment coincided with some alarming news stories.

The main agreed disadvantage of the island life was having to order your coats and shoes out of a club book.


There are many more essays in the book. If you think you may have written something like this at school in Westray in the early 1980s, please do get in touch. Telephone 01856 873166 or email archives@orkney.gov.uk or write to Orkney Library & Archive, 44 Junction Road, Kirkwall KW15 1AG

Email ThisBlogThis!Share to TwitterShare to FacebookShare to Pinterest
Labels: iniquity, kidnappers, murderers, pepple we do not now, school, Westray

Total eclipse of the heart, well ok the sun (and not total)

Well it happened, the eclipse that is, and we were very excited to actually be able to see it as the moon slowly drifted in front of the sun. Then everything went a bit cloudy and we are now sitting in weird half-light waiting for the sun to return.


For those of you unlucky enough not to have witnessed the eclipse take a look at the Orkney Library & Archive Facebook page where Stewart has posted one of the great photographs that he took from the Orkney Room this morning.


And, as we're an archive after all, let's look at something old. This photograph of a partial eclipse was taken by Tom Kent in  January 1925. 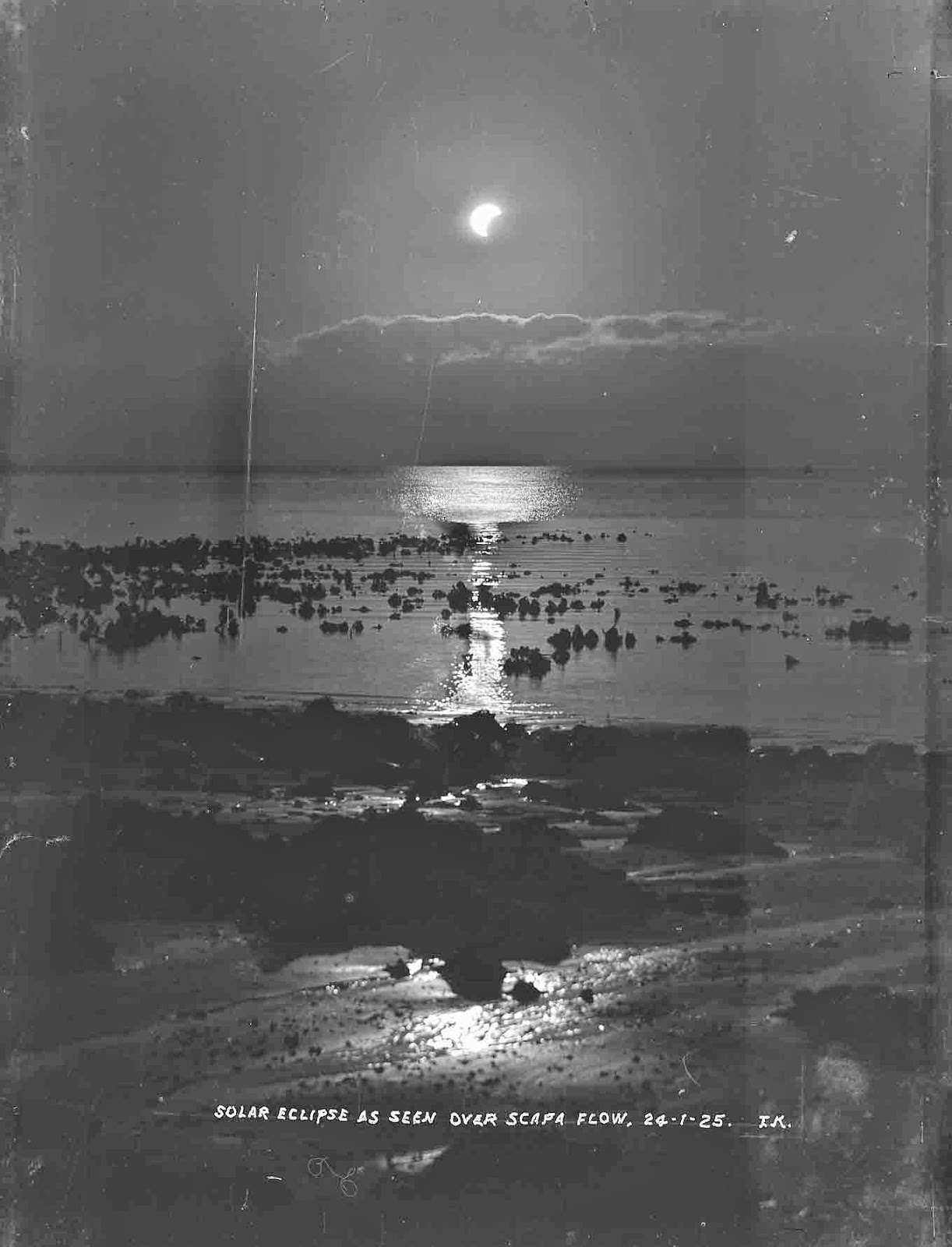 Email ThisBlogThis!Share to TwitterShare to FacebookShare to Pinterest
Labels: the fonds

In far off days we tell..

This moving poem about the Battle of Neuve Chapelle was written by J H Craigie of Orkney. It is a newspaper cutting which was kept in a scrapbook by Dr. Duncan, Stromness during WW1.

As the text is a bit faint, here is a transcription:

At morn we mustered full of hope
And strength and lusty life
And marched with hearts as true as steel
Into the deadly strife
The foe we scattered like the chaff
To all the winds that blow
But the price of our great victory
None but soldiers know.

The very heavens quivered
With the roar of shot and shell
The fire and fumes around us
Made the quaking earth a hell
My colonel, he is wounded,
My captain, he is slain,
My mates around are lying
Upon the gory plain.

And now my sight grows happy
And my head is strong and light
I see my father's cottage
At the falling of the night
And through the window pane the light
Comes flickering from the fire
For now the night is flickering fast
Around me cold and dire.

Oh yes, I hear my mother's voice
As in the days of old,
"Come in," she cries, "we're waiting,
And its getting dark and cold
Come in and lay your aching head
Upon your mother's breast
Your father he will take the book,
And then you'll go to rest."

He cleared his head and slowly sank
Upon the miry clay
And one more Seaforth Highlander
Gave up his life that day.
And sons of Orkney yet unknown
In far off days will tell
Their children how the Seaforths fought
And died at Neuve Chapelle.

The Battle of Neuve Chapelle took place from 10-13th March 1915. It was a British offensive in the Artois region of France which broke through at Neuve Chapelle, but the British were unable to exploit the success. (Information taken from Wikipedia)

Sadly James Craigie did not survive the war and was later killed at Loos, according to this report also saved in the scrapbook on page 23.

"Our Roll of Honour
Killed in Action
LANCE-CORPL. J H CRAIGIE, 8TH SEAFORTHS
The parents of Lance-Corporal J H Craigie (a native of Deerness) of the 8th Battalion Seaforth Highlanders, have been notified that their son was killed in the action at Loos in September. Lance-Corpl. Craigie was first reported as missing, and it was stated at the time that he was neither killed or wounded, and the presumption was that he had been taken prisoner. No news came from him, however, and a few days ago the relatives were officially notified that he had been killed. Lance-Corporal Craigie is third of four young Deerness men who has fallen. The fourth, his brother, has been twice wounded, and is still in France. The relatives have the sincerest sympathy of the whole community in their bereavement."

Eric Linklater, Wind On The Moon 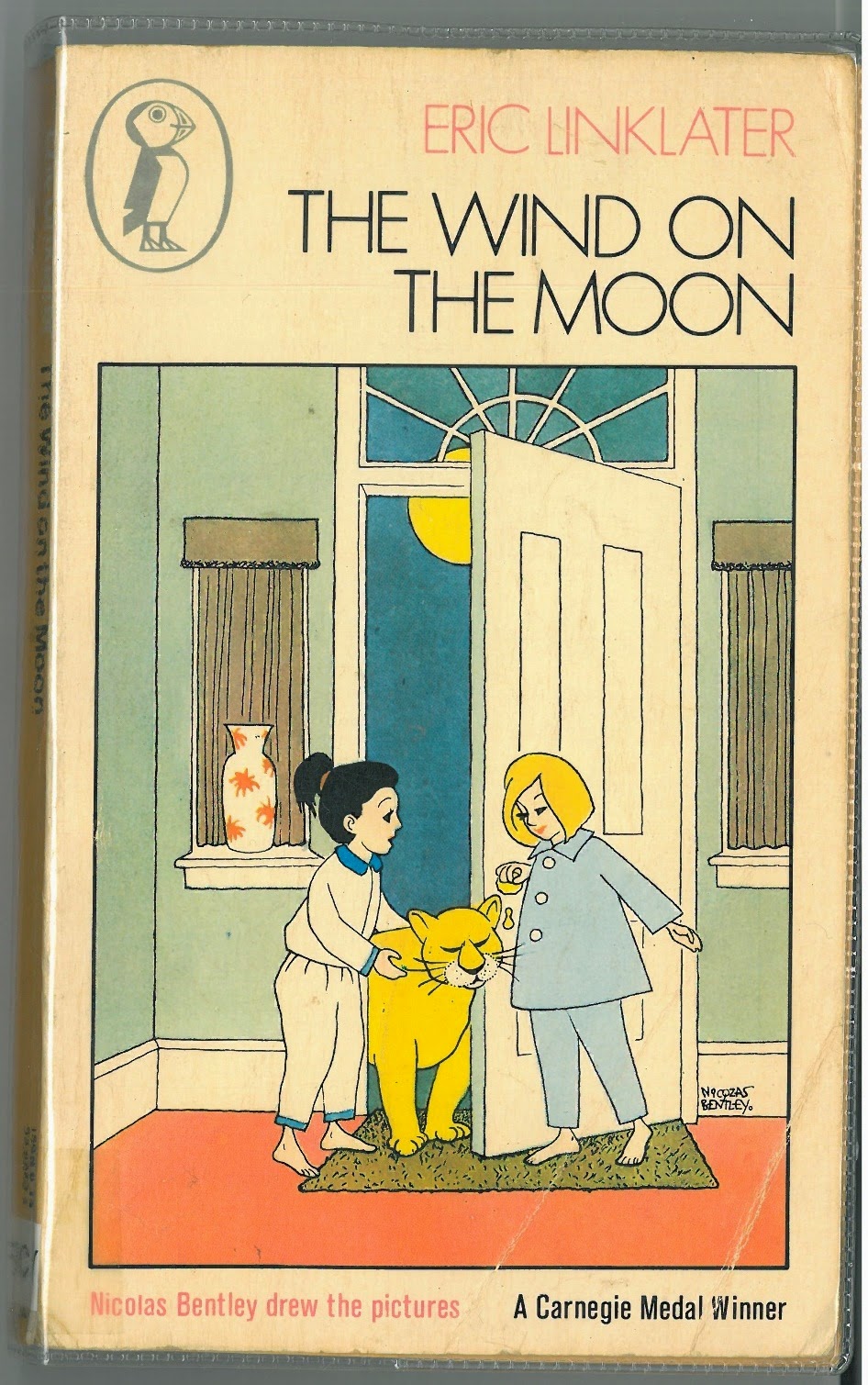 It was Orcadian writer Eric Linklater's birth date yesterday. Born in Swansea, South Wales, to an Orcadian father in 1899, Eric Linklater  was educated in Aberdeen and spent much of his adult life in Harray, Orkney.

I was aware of many of his novels for adults such as Whitemaa's Saga, Poet's Pub and Juan in America, but not of his books written for children.

We have several editions of the fantastic The Wind On The Moon so called for the warning given by Major Palfrey to his mischievous daughters Dinah and Dorinda:

There is a wind on the moon... I don't like the look of it at all. If there is an ill wind, and you behave badly, it will blow straight into your heart, and then you will behave badly for a long time to come.

Dinah and Dorindah like the sound of this as their parents do not seem to appreciate any of their good deeds at all and indeed, only seem pleased when the girls 'sit quite still, doing nothing at all, either good or bad.'

First the girls decide to be very, very greedy and eat so much that they need to be rolled down the street to the doctor's surgery by their horrified mother:

For breakfast they ate porridge and cream, fish and bacon and eggs and sausages and tomatoes, toast and marmalade, and rolls and honey. For dinner they ate roast beef and cold lamb, boiled mutton with caper sauce, Scotch broth and clear soup, hare soup and lentil soup, roast chicken with thyme and parsley stuffing, boiled fowl with oatmeal and onion stuffing, roast duck with apple sauce, apple-tart and cherry pie, Yorkshire pudding and plum pudding, trifle and jelly, potatoes and Brussels sprouts and cauliflower and French beans and green peas, and all sorts of cheese. For tea they had scones and pancakes, crumpets and pikelets, muffins and cream buns, plum cake and seed cake and cream cake and chocolate cake, and often some bread and butter as well. And for supper they had stewed fruit and fresh fruit, oranges and bananas and baked apples and half a gallon of milk at the very least. 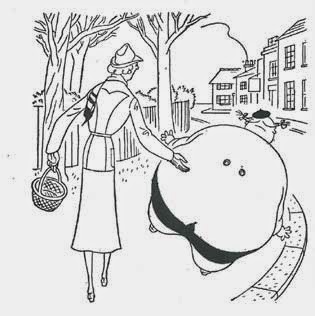 The girls then turn themselves into kangaroos with the help of their friend Mrs Grimble and get captured by a zoo-keeper. They make friends with all of the animals. 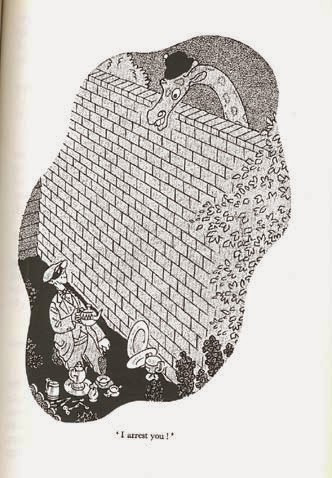 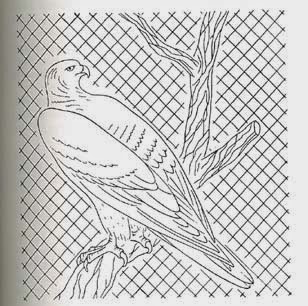 A judge manages to annoy them so they make sure that his home is filled with stinking dead mice, eels and old kippers to force him to 'change his mind'. As you do.

The girls then decide to rescue their father from a dungeon in a far-away castle. 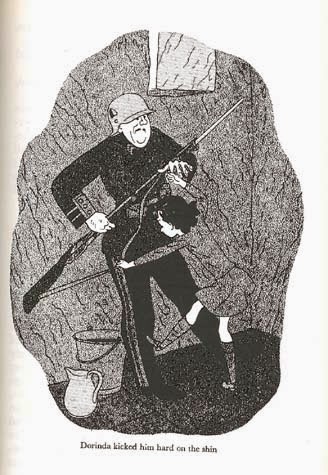 The fantastic illustrations are by Nicolas Bentley.

Posted by Archiver at 14:46 No comments: