A few days ago, we received an advance copy of this book on Margaret Tait: 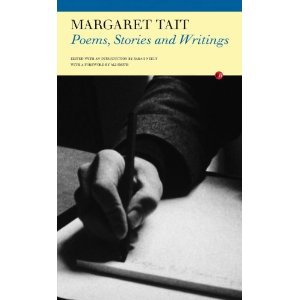 The author, Dr Sarah Neely has visited us several times to consult the Margaret Tait collection and we are delighted to finally see the fruits of her labours in print.

Margaret Tait is known (when she is known) primarily for her films but her poetry is just as wonderful. Frank and funny, weird and wonderful, magical and matter of fact, her three collections of poetry, origins and elements, Subjects and Sequences and  The Hen and the Bees, as well as some unpublished poems shall finally be available to be read by the audience they deserve

The sky has finally broken blue after a day of cutting winds and so here is an appropriate excerpt from Subjects and Sequences:

But in the land of the North there are no trees:
In the land of Pomona the apples don't grow.
In the Spring there is no blossom sweet as song
Nor song like honey in the perfumed night.
Instead, we have the flashing white
Seagull cutting the iridescent blue,
The crying blue of sea and sky, the white
Of flying clouds and birds. Oh, who
Would sip the honey in the dark and lose the light?

Posted by Archiver at 18:24 No comments:

We are currently researching the 'Deepdale monster', an eerily prehistoric looking carcass washed up at Holm in 1942. The discovery prompted a flurry of expert analysis and more frivolous newspaper articles.

Put down what you are eating/drinking now as I am about to show you a picture of the remains, groooooo!

There was a lot of scepticism in Orkney as there have been several claimed sightings of sea serpents and monsters of the deep in Orcadian waters which have not been verified. Many thought that this beast may just be two dead seals in an advanced state of decomposition. 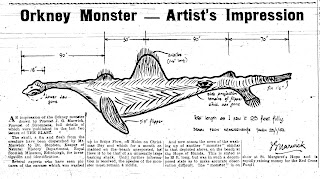 The above image was published in The Orkney Blast of 13th February 1942 and was drawn by the Provost of Stromness, Mr J. G.Marwick who went to examine the remains and described what he saw:

"The outstanding features of this monster were it's small head, long neck, massive hump, long sinuous back parts and the queer, rudder-like appendage, which one could describe, perhaps, as a fin and which projected from its lower side some distance from the tail." 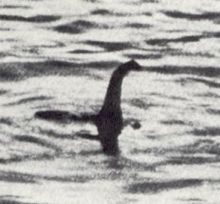 Remind you of anything?

One of the theories at the time was that the Loch Ness Monster had popped up to Orkney for a holiday. As the Orkney Blast of 30th January 1942 stated, "it is plausible for the creature to have escaped from Loch Ness and to have found its way to the waters off the Orkney mainland."
The Scotsman of the same date also pointed out that "the famous inhabitant of Loch Ness has not been seen for many months..."

Sadly, more sensible people stepped in at this point and Dr A. C. Stephen, Keeper of the Natural History Department of the Royal Scottish Museum said " I have examined the sketches and it seems to me, there is no doubt that the remains are those of a shark." (Orkney Blast, 6th February 1942) He suggested that the creature was a basking shark due to it's large size (25 to 28 feet).

We are on a list! Of libraries! Good libraries, who may earn a prize! Read all about it on our sister blog from Stromness library here, and then come back and join us as we dance about in celebration in the manner of Carlton from the Fresh Prince of Bel Air! 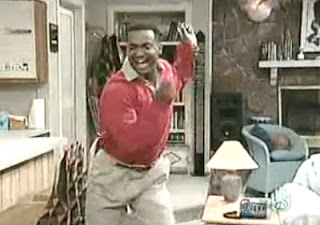 Email ThisBlogThis!Share to TwitterShare to FacebookShare to Pinterest
Labels: Library of the Year Award, The Fresh Prince

as Mark Owen so memorably crooned...

Hello, lovely readers! I have not blogged here for over a year as I have been immersed in the distressing experience of caring for another human being as if it were my own (maternity leave).

It is very exciting to be back amongst the archives, particularly since there have been thrilling new acquisitions and developments. I speak specifically of the boxes of new George Mackay Brown letters, essays, novels etc. which were mentioned by Dusty here and the fact that the vast number of dusty, letter-filled trunks which make up the Halcro-Johnson collection are finally being catalogued. Further details of both shall appear in due course.

In common with international spies, witnesses to gang crimes and the banker from Deal or No Deal, we like to keep our identities top secret. However, at the risk of being a baby bore, I would like to share with you all a little pic of myself and babe: 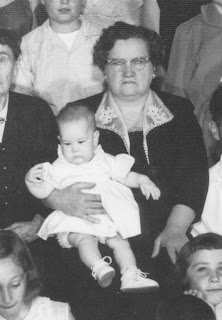 only kidding, here's us: 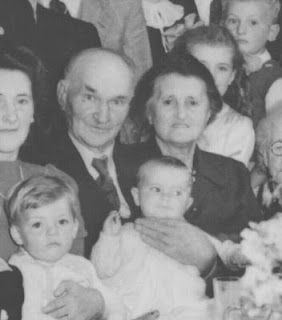 I've been a man all along and I like to strangle my baby!
...only kidding...

Motherhood has been a little ageing...
No really, archive baby is far too ugly to post a photo of. All of the above pictures come from unidentified photo folders and all that we know about them are that the first one dates from 1958 and that the last one was taken on North Ronaldsay.

If ye will persist in Emigration...

With so much talk on the tv and in the newspapers about the anniversary of the sinking of the Titanic, I wondered what the reaction was like in Orkney. The first report of the disaster appeared in the Orcadian on the 20th April 1912 on the front page. Quite small and unassuming in the bottom right hand corner.

By the following week the news had spread and the ministers from the churches aired their views from the pulpits.

The Rev. George Millar from the Paterson U P Church said:

And the Rev. J Christie from the North U.F Church compared the death toll with the population of Stromness: 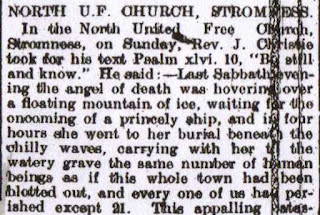 Ironically in the papers at the same time many adverts still appeared enticing people away from Orkney with offers of work in a new land, such as this one which looks to us now like a scene from a John Wayne or Clint Eastwood film: 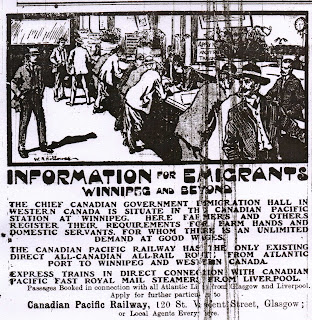 And even on the same pages as news of the disaster were adverts like this one: 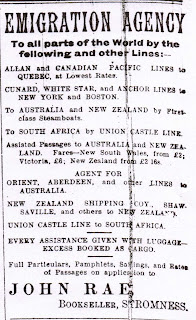 Many local shops capitalised on the trend of emigration with adverts like these: 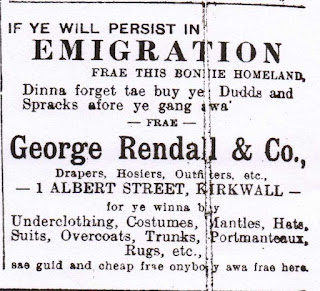 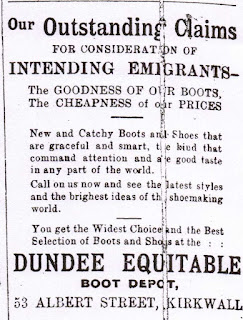 I'd really like to know what "Dudds and Spracks" and "Catchy Boots" were.


By the following week more information was reported about the sinking and the heroism of some of the passengers: 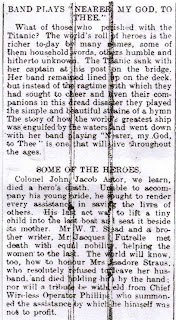 And the suffering of the survivors: 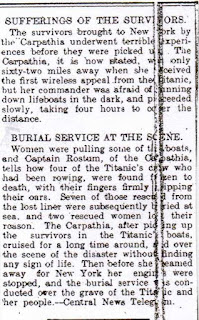 And this final review in the Orcadian on 27th April 1912: 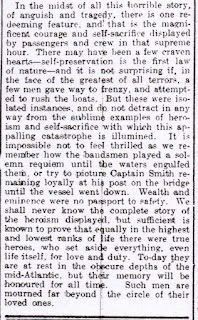 What's your Motto of the Month? 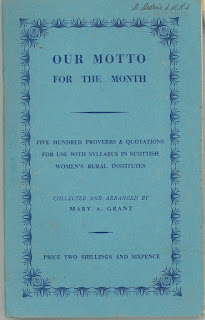 We have recently been re-organising our collections of SWRI papers and have found that we are doing well with six groups represented. St Andrews & Tankerness; Costa; Deerness; Harray; Rousay and St. Ola, as well as some Orkney Federation minutes too.  Below is the first minute of the Harray Branch from Aug 1936. 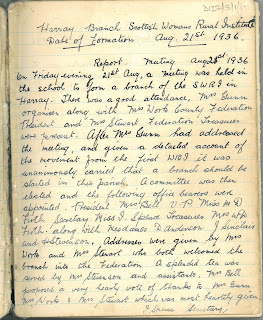 Together this makes up thirteen boxes. The new collection number is D127. We would like to thank all the staff who recently helped collate this collection together. 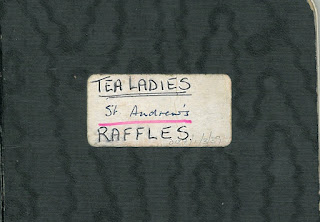 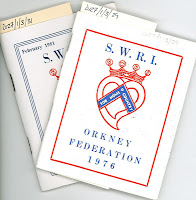 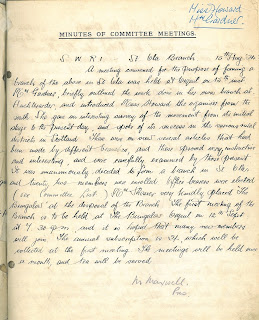 Shown here is the first minute of the St. Ola Branch from Aug 1924.

I know there are more groups out there, so if you're looking for somewhere to store all your old minute books and documents, look no further, we'll be happy to take them!

For more information on the present groups of the Scottish Womens Rural Institute try their website at http://www.swri.org.uk/