Today is the 150th Anniversary of the death of Samuel Laing of Papdale, who died in Edinburgh
on 23rd April 1868.
Samuel Laing was born in Kirkwall on the 1st October 1780 and baptized on the 2nd. His parents were Robert Laing of Strynzie and Margaret Blaw.
According to Who was Who in Orkney, he was educated "at Kirkwall Grammar School and in an Edinburgh counting house. He went to Kiel to learn German and later from a London counting house became secretary to a merchant in Holland and British Consul in Rotterdam, rapidly learning Dutch."

He is described as "Norse scholar, soldier, entrepreneur, agricultural improver, linguist, author and translator."
In 1818 he inherited his family's estate in Orkney and settled at Papdale House, St Ola.

One of his best known translations was of Snorri Sturlusson's 'Heimskringla' the saga history of the Kings of Norway in 1844, copies of which we have here in
the Orkney Room. 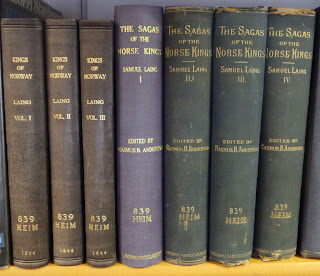 If you would like to learn more about Samuel Laing, we have a copy of his Autobiography which we keep in the Orkney Room under reference 920 Y LAI. There are also many lending copies in the Orkney Library downstairs. 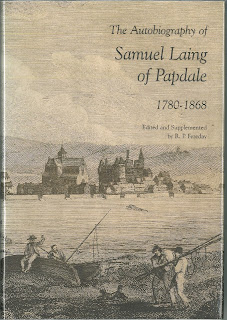 In this publication which was published in 2000, it says the original manuscript has been lost. We are pleased to say that that is no longer the case. In 2003 the original manuscript was deposited in the Orkney Archive on behalf of the owner. This means the public can request to see it in the Archive Searchroom whenever we are open.
Here are a couple of pages: 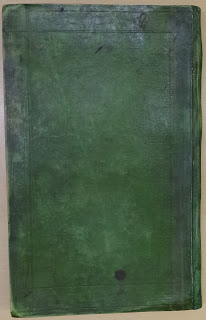 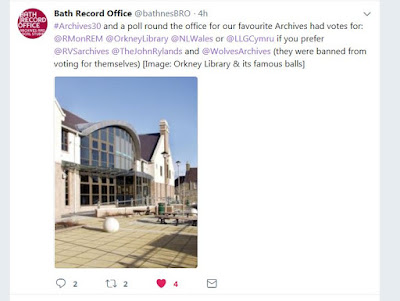 Why, shucks, and many thanks to Bath Record Office staff for voting for us in their poll of favourite Archives.

The 12th instalment of our "Orkney at War" Exhibition is now available to see downstairs on the blue carpeted wall in the Library (aka the Wavy Wall). [not between 5th-13th Sept 2018]
The display shows how Orkney and Orcadians were affected by the war in their daily lives, using items from the Archive collections which were created at the time. Items such as newspaper reports, scrapbooks, council minutes, photographs, letters and diaries.

From Gunner Astles' Diary (Archive reference: D1/237): Gunner Astles was stationed at Hoxa Battery in South Ronaldsay and was a keen observer of his surroundings. His home county was Cheshire.

The forenoon was very dull and a slight westerly wind prevailed. A little rain, but not much. About 2pm the wind changes to north and strong, with a very severe snap of Arctic weather in consequence. It was very cold, freezing hard and much snow fell, but very fine it was not long before the wind blew it all away from the camp.

A funeral was on in the village, which in Orkney is never attended with women. The neighbours, friends and relatives follow behind and the body is conveyed in the hearse. The funeral passed us by and altho' but a few hundred miles away from home, we feel the change of custom.

The weddings here are also very peculiar to our own home. Invites are issued on the Monday and the deed is done on the following Thursday as a rule. The custom is carried out pretty well always and even engagements are entertained with dancing and merry making. In the village Cromarty hall, a large hall owned by a man in the name of Cromarty, is usually the rendezvous, and since I have settled here I have heard of several thus. The wedding usually takes place at night, kept up all that night, the next day perhaps, and the same night ends. A church ceremony is not necessary, a parlour, hall and even farm being appropriate for the person to join up the happy couple.

A farmer's cart is now outside the hut and, as we hear its usual noise of the wheels, "click-clack, click, click, clack", and a voice in the mess calling, "cart up" it again seems like old times, this being the first night for some time he has been able to bring up the meat, etc. from the village."

Before Sheriff Mercer at the Orkney Sheriff Court on Tuesday, William John Garden, representing the firm of R Garden Ltd, being the firm responsible for a message boy in charge of a barrow which contrary to the Defence of the Realm Regulation, carried no light on the night of December 15th last, tendered a plea of guilt to the charge.

The Sheriff said it was necessary that the order should be attended to, because in the darkened condition of the streets just now, the presence of vehicles of the kind set out in the charge might prove a serious danger to the public if not marked out by lights, and that was no doubt the reason for the passing of the order. The penalty in this case must be £1. The fiscal drew attention to the fact that a few barrows were carrying lanterns which did not show a red light to the rear, and he wished to point out that that was not a proper compliance with the Order. The Sheriff - it would be well if the public would note that the mere carrying of a light is not sufficient. There must be a lamp (or lamps) which besides showing a white light in front shows a red light behind. Albert Maxwell, merchant, Kirkwall, charged with a similar offence, in respect of his message boy, also tendered a plea of guilty, and the same penalty was imposed. 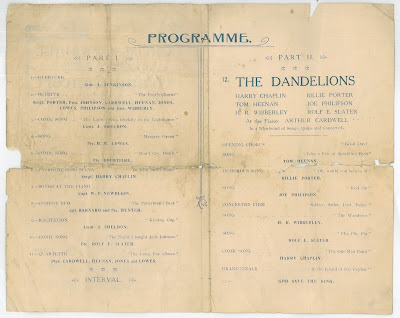 The food shortage is now becoming noticeable in Kirkwall. on Saturday night several butcher's shops were completely sold out early in the evening, and nearly every evening one or other have to shut before the normal closing hour. Butchers, of course, are now, in addition to observing the instructions in regard to meatless days, receiving only a proportion of the meat they have been able to dispose of for some time back. At present some difficulty is experienced in keeping the daily sales with proper limits, but the introduction of the meat rationing scheme, which is expected to be in operation shortly, will no doubt remedy this.

[1st April 1918]﻿
During the Blizzard of January [12th] two destroyers ran aground some miles away from here [Hoxa Battery]. All hands were lost bar one. To-day I have been to see the wrecks, and a good deal of nature I saw.
The wrecks are the scenes enacted one never hears of, but I should think it one of the greatest accidents in the Navy. For two destroyers crash on the rocks, hardly 50 yds from the cliff side, and then all hands to perish from shock and exposure, seems jolly hard lines in a place like it has happened in.

The dilemma of the survivors must have been sad for the cold, blizzard raging, and the fact of the cliffs being covered in snow on a dark night must have been a very trying time before they expired. 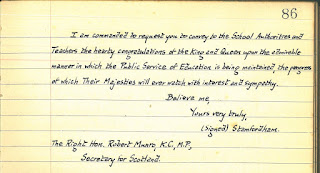 From John Fraser's Scrapbook (Ref: D1/692): Awards and Medals [exact dates are not always given for these entries, but they are in the later part of the book which suggests they occurred later in the war.] 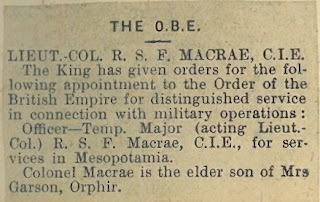 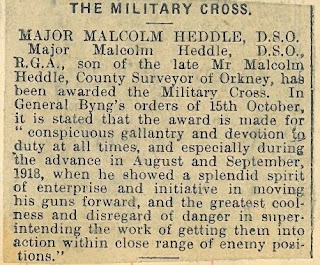 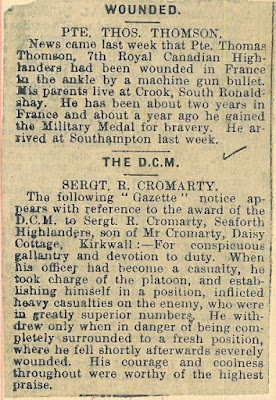 Also included in the exhibition is a handbook on how to spot German submarines which was published in April 1918. This booklet was collected by Dr. T Crouther Gordon as research for his book, Early Flying in Orkney. All pages are on display, but here are just a couple of the pages as examples (Archive reference: D1/1017/5): 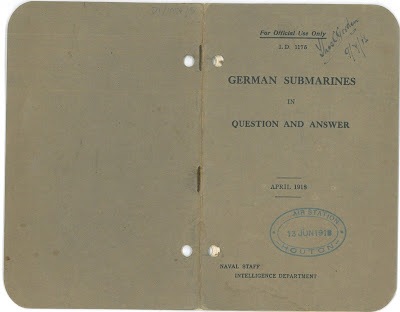 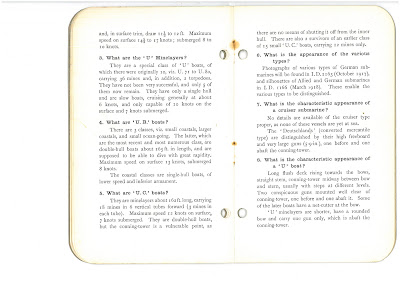 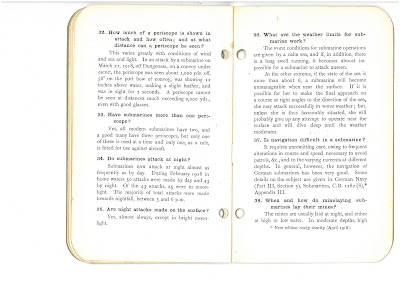 The 7th, 8th, 9th, 10th and 11th instalments are still displayed in various locations around the building and the 1st, 2nd, 3rd, 4th, 5th and 6th instalments, including a special feature of the sinking of HMS Hampshire, are available to see in a folder in the Archive Searchroom. Click on "Orkney At War" in the labels to see more blog posts on this subject.
Posted by Dusty at 12:41 2 comments: