The Wreck of the Jonge Louisa - a gift from the sea

On 12th February 1785, Pat Hagart, Factor to the Earldom of Orkney, sat down at his desk in Kirkwall and began a two year correspondence with Messrs Jean Texier, ship owners in Amsterdam, which ended with a fraction of the value of their beautiful brigantine and her cargo being delivered to them in January 1787.

Pat Hagart, as representative of the Crown in matters of the sea, had received news of a remarkable event off Deerness, the most easterly parish on mainland Orkney, and had gone to there to investigate.
In the previous month of 1785, on Sunday 16th January, a brigantine had been found three or four leagues east of Orkney. She was in a desperate condition...and with much difficulty brought to land but without any person aboard. Pat Hagart does not say who had first spotted her, but that seven boats from Deerness went out to the stricken vessel and established that not a single person remained aboard.
The brigantine was found at least 11 miles/16.5 kilometres out. It was January, when the weather could be inclement and dangerous, yet someone in Deerness or out at sea to the east saw the vessel and then William Stove of Pickletillum, Robert Stove of Sandside, Andrew Cormack of Netherby, Oliver Craigie of Breck, Edward Ritch of Cutpool, Andrew Skea in Copinsay and Edward Pottinger (probably of Copinsay) set out, with 33 others, at the oars of seven boats to see what was afoot.


What they found was the Jonge Louisa, the wreck of a beautiful ship, minus one of her masts and no-one answering the Deerness men when they hailed her. Somehow the men boarded her and with much difficulty brought [her] to land.
It is not clear where the Jonge Louisa was brought to; probably first to the island of Copinsay and subsequently to Sandside on the east coast of Deerness. Pat Hagart describes her in his letter on 9th April 1785 as being in an unfavourable situation. In November 1785 Thomas Balfour, on behalf of his brother John Balfour, owner of Copinsay, was claiming salvage on the Jonge Louisa. This suggests she was moored off Copinsay, or on Copinsay, at some time. Thomas also writes of bringing her into Sandside. 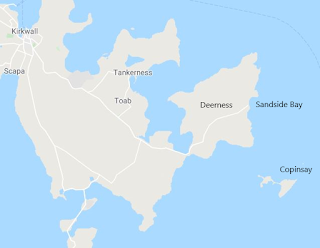 The excitement and speculation in Deerness must have been enormous. The men who brought her in were all from the east side of the parish. They were experienced seamen, the workforce of a peninsula that is almost an island, living by a combination of the land and the sea. Life was not easy in 1785. High numbers of young men were leaving Orkney to join the British Army, the Royal Navy or to go to the Nor Wast to work for the Hudson Bay Company in Canada. But that January Deerness fielded 40 men to rescue the Jonge Louisa. The possibilities for advantage from saving her were considerable and the news of her discovery will, no doubt, have travelled throughout the parish quickly.

Imagine the news spreading around Deerness from house to house in a place where many people were close family to one another and a community of neighbours and friends. There would have been amazement, a need to hear about how she had been brought in, and, much more importantly, what might be salvageable from her. Was there a cargo? What was it? In what condition? What about the outfitting of the ship? What about the crew's possessions? What was re-usable? Sails, ropes? Endless possibilities. And last, but not least, what had happened to her luckless crew?

Imagine too all the discussion by the men of the parish on what to do next. Inspection of the hold showed she carried iron and thousands of planks of wood (deals). Whilst the deals were manna from heaven to Deerness, the iron was a problem, to know how to process it and disappear it into the community, as was the ship herself. The decision must therefore have been made, probably reluctantly, to let the Crown's representative in Orkney, Pat Hagart, know of the Jonge Louisa's rescue and also Thomas Balfour, representative of one of the main landowners in Deerness.


The news of the ship's arrival appears to have taken some time to reach Pat Hagart. Note the Jonge Louisa's arrival on the 16th January and that Pat Hagart's letter is not written until the 12th February. In his letter to Amsterdam, Hagart advises that he found the ship to be load with Deals [and] iron, but strip'd of every thing that could be carried away. Just how bare was she when she arrived?

Hagart does not give a date for his visit to Deerness but he had to go over her with a very fine tooth comb indeed to find any clue as to her ownership. He found a paper wrote in the Dutch language but very much spoilt with salt water and that gave him enough information to conclude he should write to Messrs Texier.

Given that he did not put quill to paper until mid-February, and that there was good money to be made from the salvage of the ship and a cut in the disposal of a valuable cargo, it is reasonable to think that Hagart did not delay in writing to Messrs Texier once he knew who owned her. So any other delay in the matter was either on the part of the landowner Dr Thomas Balfour or the Deerness men. Given too that Balfour might turn her arrival on his shores to his advantage, the conclusion that Deerness men, fully aware of the claims landowner and Crown might pursue, held back on the news of her arrival, and took best advantage of what cargo no-one could argue to have been on board her when she was taken to shore. Only Deerness men could say what was still removable at that point...

Or a Danish Captain who had reported to Messrs Texier that he had seen and clearly boarded the Jonge Louisa off the Norwegian coast near the island of Hitra (previously Hitteroe) after 9th December 1784. (see below)

Pat Hagart's letter would have left Orkney by ship in trusted hands and been passed along a pathway of further trusted hands until it finally arrived in Amsterdam. Messrs Texier received Pat's letter and responded on 18th March 1785. This letter produced a response from Pat on 9th April, a speedy turnaround for the time.

Messrs Texier were able to give a detailed account of events leading up to the arrival of the Jonge Louisa off Orkney. The ship, under the command of Captain Nathaniel Pronk, had headed from Holland, north through the Skagerrak and then south through the Cattegat, into the Baltic Sea, and to St Petersburg where she was loaded with iron, and thence to Wybourg (now Vyborg on the Russian side of the Russian/Finnish border) where a large cargo of wood was loaded. The iron belonged to Messrs Texier and the wood to Messrs Mauritz, Dreyer and Bendix with whom Pat Hagart would liaise regarding the eventual sale of the wood.
The Jonge Louisa turned south again, heading back to Amsterdam, came successfully back through the Baltic Sea, the Cattegat and the Skagerrak, but on or about the 9th December, being on the Coast of Jutland, the sea being very high with a great Storm, the boats having got loose and fallen upon the Hatches, tore them to pieces and the ship got soon full of water. In such condition having nothing to live upon, the Captain and Crew took to the boat and were taken up at Sea by an English Captain who carried them to Dieppe and thence back to Amsterdam to report the abandonment of the ship.

Messrs Texier had some suspicion that the vessel had been left too soon by the Crew and made enquiries in Norway, being advised by a Danish Captain, that she had been seen not far from Hiether Wie (now Hitra). The Danish Captain reported his removal of the ship's cable and the greater part of the kitchen furniture. There were no further reports of her being seen until 31 days after the storm, when she appeared off Deerness, having come across the North Sea in one piece, pushed across by the east winds.
Once the Crown, via the Earldom, and the Balfours were involved, the Deerness inhabitants lost control of the ship and cargo but local men were employed later in 1785 to unload the vessel and transfer her cargo to Kirkwall for sale. The ship and cargo were kept under watch until dispersal, with that watch organised by Thomas Balfour's main man in Deerness, George Louttit, schoolmaster. Is his report tongue in cheek when he describes a gale on 20 October 1785, in which some of the deals were damaged? Louttit lived in Deerness and one of his sisters was married to James Petrie at Stonehall. Might his loyalties have been divided between his employer and his family's best interests?

The men who finally unloaded the Jonge Louisa were Gilbert Wick, Thomas Miller, Robert Stove, Magnus Dick, John Laughton, John Sutherland, Hugh Peace, William Work, a second Hugh Peace and William Sinclair. Is Robert Stove a young Sergeant? (See our previous blog post here). He is probably not the same Robert Stove of Sandside who helped bring the ship under control, for that group of the original seven men were in hot dispute with Pat Hagart over salvage monies. It was the opinion, when the men ultimately went to law in the autumn of 1785, of David Balfour lawyer in Edinburgh and brother of landowner Thomas Balfour, that they had no claim on the cargo of the ship, but they did have a salvage claim for the ship itself and in the end they received £70 between them for their efforts, equivalent to approximately £6000 today. Presumably it was further sub-divided with the 33 men who helped in the initial rescue of the ship.

A shipwreck was a valuable event and everyone involved in processing that wreck could make money and benefit from her arrival. In the case of the Jonge Louisa, the bounty was great, and there was none of the extra effort of feeding, clothing and generally looking after her crew. The Earldom dealt with her salvage and the ultimate sale of her cargo, and the ship itself, being paid for work done by the ship's and cargo's owners. Having the opportunity to purchase and sell the cargo, the Balfours received salvage monies, bought parts of the cargo and no doubt made money from that. Others, for example: Kenneth Sutherland of Campston bought deals from the cargo; George Louttit was paid for his endeavours in Deerness; the boatmen who rescued her were paid; their lawyer was paid; the men who unloaded the ship were paid. Who knows what other bounty also furnished the houses and farms and boats of Deerness following the arrival of the Jonge Louisa.