The 11th instalment of our "Orkney at War" Exhibition is now available to see upstairs on the Orkney Room corridor noticeboard.
The display shows how Orkney and Orcadians were affected by the war in their daily lives, using items from the Archive collections which were created at the time. Items such as newspaper reports, scrapbooks, council minutes, photographs, letters and diaries.

Territorials at the look-out hut on the Brae of Moan, Wasbister, Rousay. c.WW1. On the left is Corporal Isbister who was in charge. Back right is Marcus Wood from Aikerness, Evie.

Band Performance
Band performances in Kirkwall have, since the outbreak of war, been, unfortunately, of rare  occurrence. On Saturday evening, however, the inhabitants were provided with a treat in the form of a band from one of HM's ships. Taking their stand in front of St Magnus Cathedral, a delightful two hours' orchestral concert was given, which was greatly appreciated by the great concourse of people who were present.

Letter to the Editor - The A.C.C. Concert in Kirkwall
Sir, - I notice with surprise in the last issue of your valuable journal the lengthy and somewhat favourable notice you give to the A.C.C. Concert held in the Temperance Hall.
I feel I am voicing the feelings of a large number of my fellow townsmen in raising a protest against this class of entertainment in Kirkwall. We were a quiet and pious community until invasion by men of the Fleet and Air Service was thrust upon us some time ago. We, of course, have no wish to grumble or complain of this, realising that it is unavoidable and for the good of the nation as a whole. We, however, can see no necessity for performances in our Temperance Hall which are a replica of those given nightly in the debauched music halls of London. The spectacle of an inebriated and vulgar person such as was depicted, was neither elevating or amusing, although, to be sure, the acting savoured more of the village idiot in this particular case. The sleek manner, glossy hair, and well-kept fingernails of the music hall manager, can only have a detrimental effect on our daughters, tending to make them dissatisfied with the homely lads at our doors, who are nearer and should be dearer.
[no name given]

The Lost Vanguard
Was HMS Vanguard the victim of foul play?
The loss of this fine Dreadnought, which blew up while at anchor on the night of the 9th inst. as the result of an internal explosion, is to be the subject of a full inquiry.

﻿﻿According to the Admiralty statement, the Vanguard sank immediately, and unfortunately there were only three survivors on board, one of whom has since died. Twenty four officers and seventy-one men, however, were not on board at the time of the disaster, making the total number of survivors 97. The Vanguard had normally a compliment of 870, so it would appear that 770 men have perished.

﻿
This is not, unfortunately, the first disaster of this kind which has occurred to the British Fleet (says Mr Archibald Hurd, the Daily Telegraph naval correspondent). On former occasions it has been suggested that possibly there had been foul play, but official assurances were given to soothe these fears.

In the meantime, however, the Stockholm revelations have been published, and we have learned of high explosives being made up to represent pieces of coal to be inserted in ship's bunkers. In the circumstances the public will await with anxiety the result of the official inquiry which will be held.

Apart from a sense of mourning the blowing up of the Vanguard will cause, the overwhelming thought for the moment will be that every precaution must be taken to prevent any further incident of this kind. The blowing up of a ship by internal combustion had become almost unknown in recent years. Since this war, however, such disasters have occurred to British, French and Italian ships, but, so far as is known, none had taken place in connection with German and Austrian Fleets.

Mrs J.W. Cursiter, formerly secretary of the Orcadian Women's Suffrage Society, has received the following letter from a wounded French soldier who has occupied the Orcadian bed at Royaumount:-

"Hospital de Royaumount, June 22, 1917 - Dear Mrs Cursiter, - I am very pleased to write to you after my stay at Royaumount in your comfortable bed, and after all the care which has been bestowed on me. I am proud to have shared in such boundless kindness, and glad that I am able to talk a little about what I saw in Britain, for I have spent several seasons there, particularly Newcastle-upon-Tyne.
And now I am going on leave to see my dear parents for the first time in five months. I would end my little letter by wishing you every happiness, and a paradise to come at the end of your life. - Your affectionate Ally, (signed) Jacob Jean Marie."

In WW1 over 18,000 charities were created to aid men at war and women and families at home in the UK. This included contributing to the upkeep of beds in hospitals.

From the Stromness Town Council Minutes:


At a Meeting held on Thursday 27th September 1917

"The Council considered the matter of the navy carrying passengers gratuitously from Longhope to Scapa and elsewhere in consequence of which the trade of the town had been considerably hampered and the usual trading steamer "Hoy Head" had been placed at a considerable disadvantage. The Magistrates with Councillor Baillie were appointed to see the Master of the "Hoy Head" and have a letter written to the Admiral on the subject."


OCTOBER
From the Kirkwall Town Council Minutes, K1/1/17 p512:
Meeting held on 17th October 1917
The following letter was read, "Paterson Manse, Kirkwall. 29th Sept 1917. Dear Mr Heddle, Will you kindly convey to the Provost, Magistrates and Councillors of the City and Royal Burgh of Kirkwall my sincere thanks for their kind message of sympathy in my great bereavement. The very beautiful Card on which their message is expressed will always be one of my most treasured possessions and will ever remind me of the years of our citizenship in Kirkwall, yours sincerely, [sgd] Agnes H. Millar"
NOVEMBER﻿ 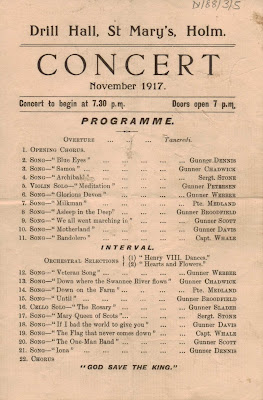 Extracts from the Diary of Gunner Astles, Archive ref: D1/237

24th December 1917
The following notes are going to be chiefly on Orkney as I find it. I have been here over two years now, during which much has happened. Phenomena is in plenty, and it may look very odd at the weather results, later. Today has been mild, but 12pm has brought a great change, and now, as I write this, snow and hail is making Xmas feel ever so much nearer and seasonable.

Christmas Day, Orkney 1917
Christmas Day! The time of the Nativity. For the 4th year of the war, this has brought many comparisons as to the 1st, which I spent in the Red sea. I have been out for the greater part of the past night, and the morning was heralded by my pal, who it might be said, was anything but polite.
Wash over; hair brushed; immaculately attired in a blue jersey - as served out per Admiralty - and my pal and I sit down to dine.
Oh! What a feast. Two or three slices of bacon; a basin of tea; about eight loaves of bread; and ever such a long sit down, complete the menu, and as we are about the last to finish, a shrill whistle calls us out to Parade...
For my job I find myself in a party to draw water, which is to "bile douffs in" tis said...
11.30am the Christmas Dinner is brought: Pork; Potatoes; Cabbage; Apple-Ring Pie; Semolina Custard, and the dinner only needs putting out. One of the boys makes the gravy, calling it "Black Jack"...
A brisk walk of forty minutes lies before me... My way continued by way of the dam across the hill, and through the picturesque village of St Margaret's Hope...
"The Steamer" had arrived a few hours earlier...[it] is really the salvation here now-a-days. For many days the few shops have been empty of any seasons stores. Fruit and all such stuff has to be brought here, and...most commodities have become from luxuries to extravagances anywhere, but here, alas! all three have been at a premium.

The 7th, 8th, 9th, 10th and 11th instalments are still displayed in various locations around the building and the 1st, 2nd, 3rd, 4th, 5th and 6th instalments, including a special feature of the sinking of HMS Hampshire, are available to see in a folder in the Archive Searchroom. Click on "Orkney At War" in the labels to see more blog posts on this subject.