Today we are very pleased to introduce The Balfour Blogger, who will share with us all the interesting and wonderful contents of the Balfour of Balfour and Trenaby Collection* (Archive Reference: D2). In this first blog, we reveal a new mystery!

The Balfour Estate papers are amongst the jewels of the Orkney Archives, contained in 52 boxes, amounting to some 50,000 documents. When the papers came from Shapinsay into the Orkney Library in 1962, a rapid cataloguing of this huge collection was made. The speed with which the task had to be undertaken meant inevitably that much detail was left out and some years later, Archivist Alison Fraser started afresh to produce a detailed catalogue at box 1, and, between a myriad other tasks, catalogued up to Box 15, before her retirement.
I volunteered in 2008 to help with Archive tasks and was asked if I’d take on the Balfour catalogue. I agreed to the challenge and only this week, after 7 years of an hour here, an hour there, I’ve completed boxes 16 to 21 inclusive – 31 to go. In the course of the job so far, I’ve uncovered fascinating information about the Balfours, other Orcadians, life in Orkney and elsewhere, mainly across the 18th and 19th Centuries but earlier too. The Balfour papers are indeed a treasure trove and one that needs sharing, and the plan is that now and again I’ll report on what’s happening in the Balfour boxes and I’m starting with a discovery made 2 weeks ago: a Westray  story, quite new and exciting...

Marcus Calder was the factor of the Balfour Estate and on Wednesday, 2nd December 1863, 152 years ago this month, he wrote to David Balfour who was away on the Continent nursing his and his wife’s poor health from another Orkney winter.

He writes to David Balfour that David Manson, Balfour’s tenant of Ouseness, north-east of Pierowall, Westray had been given the old doors of the aisle in the Ladykirk, St Mary’s, Pierowall, where Stewart, the Laird of Brough was buried in 1858, following the doorway from which they came having been built up. The Reverend Brotchie, the minister, had made the gift to Mr. Manson and Manson made a barn door from the two old doors. 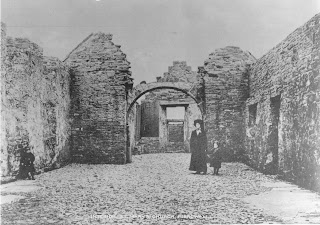 Ruin of Ladykirk, Pierowall, Westray (Ref: L6857/4) no date given
About ten days ago – so, around the 22nd of November 1863 – Manson’s wife was going about and chancing to look into the barn, what should she see sitting in the door inside the barn, but the Laird o Brough! She screamed and fainted. Her daughter (a great big woman) hearing the noise, came running out to see what was the matter. She saw the same sight and followed the mother’s example. A boy seeing his mother and sister, as he thought, dead, ran down to the shore where his father was working at the ware and told him that mother and sister were ‘’lying in the Close.’’ Of course, David hurried home and saw the Laird still sitting in the door.
Marcus Calder writes that David Manson picked up the women, presumably restoring them to their senses, calming them and his son, and immediately set off for Cocklehouse, south of Pierowall, not far from Fribo House where Mr. Brotchie lived, knowing for some reason that he’d find Brotchie at Cocklehouse. 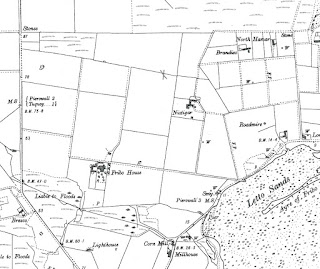 Using an older map for reference, we worked out that Cocklehouse was roughly where the X is on the above map.

Mr. Brotchie was much distressed and ordered David to go immediately and put the door back to the Old Kirk.

Well, David got the door in his cart and took off with it to the North Kirk. As he was coming near it he met some man who spoke to him, and who, after a minute, said ‘’The Guid preserve us, there’s the Laird o Brough sitting in your cart’’

David in a fit of desperation couped the cart and cleared himself of the presence of the Laird and the haunted doors.

All this is bad enough for the Manson family but the story doesn’t quite end there: Brotchie requires two men to sleep with him now and a third to watch in the interim!!

The tale ends with the two exclamation marks and the letter proceeds with other estate events.
Interestingly Marcus Calder clearly sees no need to explain to David Balfour why Brotchie is so shaken despite the fact that he, Brotchie, didn’t actually see the Laird. Why does Calder not need to explain anything? Would the Minister not have been more likely, given his calling, to pour scorn and disapproval on David Manson’s account?
The exclamation marks say it all – the death of the Laird took place only 5 years previously and at the time it was rumoured that Brotchie had had a hand in that death. Jocelyn Rendall, a local historian from Papa Westray, recalls a snippet from a verse which alluded to a poisoned cup and Tom Muir, Orcadian story-teller and Orkney Museums Exhibitions Officer, also recalls hearing tales that the Rev Brotchie had fallen out with Stewart of Brough and, aided by two of his kirk elders, they murdered the laird.
So there it is: the Laird o Brough sits himself down in the barn entrance of Ouseness, 5 years after his death and sets out for the Ladykirk in David Manson’s cart, all in broad daylight on a working day in Westray in late November 1863. Marcus Calder writes to David Balfour ten days later with the tale, more in humour than anything else, as if there’s really not much to remark upon at all.


Does anyone out there know more? What is the full story of Brough’s death and Brotchie’s involvement? Is there any truth in the story of a murder? What happened to the doors? Did the Laird haunt anyone else or appear at Ouseness on other occasions? Did Brotchie ever sleep easy in his bed again? It’s a remarkable tale, with much left out of it and unusually, one apparently lost to Orkney’s storytellers. Orkney loves a good story, so why has this one been mislaid?


Written by the Balfour Blogger and posted by Dusty.