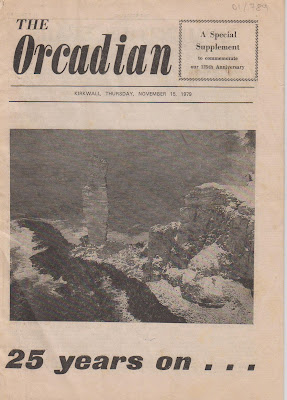 The featured archive for today﻿ is the supplement to the 125th anniversary edition of The Orcadian. It appeared on the 15th of November 1979.
The Orcadian newspaper was actually first published on the 14th of November 1854 by James Urqurt Anderson. The Orcadian firm was already in existence as a bookbinding and printing service.
The supplement looks over the advent of North Sea oil and its effects on the island, the demonstrations against Uranium mining and the concerns of population drift. The most depressing section, however is entitled 'cost of living'.
Here, the author complains that whereas a first class stamp had been but tuppence ha'penny when the centenary edition was published in 1954, it now cost TEN PENCE to send a letter. It is further pointed out while a bottle of whisky had been about 20 shillings, a consumer was now set back by around £5. Further more 'A good, sound stone-built two-storey house in Kirkwall with garage, greenhouse, storage space and a biggish garden could have been had for a little over £3000 in the early fifties. The price today is much more likely to be in the £40,000 bracket.' Good lord.
Posted by Archiver at 14:31

Email ThisBlogThis!Share to TwitterShare to FacebookShare to Pinterest
Labels: birthday, The Orcadian