The great smell of fish guts in the morning 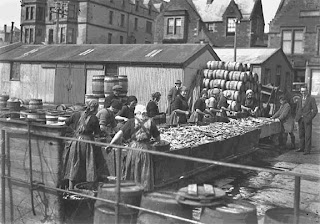 Herring gutters at work in Stromness, photographed by W. Hourston

The plans for the regeneration of Stromness Pier Head are moving slowly ahead so I thought it might be a good time to look at how the area was used in the past in case they need any ideas.

Stromness had a relatively brief spell as a base for the herring fishing fleet, from the mid 1880s. At the height of the industry there were 38 fishing stations spread along the Stromness shoreline with as many as 2000 gutters and packers hard at work. The arrival of the fishing fleet gutters and curers every year must have been a considerable boon to the economy of the whole town. The population of Stromness at that time was approximately 1700 but, for that few weeks of the year, this would be increased by up to 5000 fishermen and fish workers.

Unfortunately nobody told the herring when they were expected in Stromness and they had the annoying habit of not turning up when they should. The total catch for one year could be disastrously low, then the next year an all time high. This unreliability was to prove too much of a risk for those involved, and the fishermen and curers began to desert Stromness. By 1908 it was all over.

But wait, maybe not! In 1927 three curers were rented space by the Harbour Commissioners at the pier head. The venture caused much excitement in the town and the Orkney Herald newspaper included regular reports on its progress. The curers arrived in early May and set to work. By the start of June it was reported that the herring fishing was successful and that more curers had been attracted to the town, but by the end of the month this optimism proved unfounded as boats left for more profitable areas and the curers troughs remained empty. Herring fishing at Stromness was no more.
Posted by The Fonds at 10:20